Rotary "Swivel Rocker" bearings, to be precise, something quite similar to a Lazy Susan bearing, but with springs, like this: 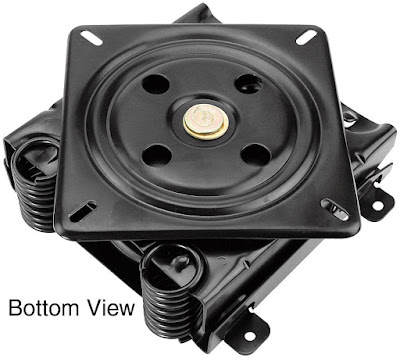 The one being replaced doesn't look nearly as good: 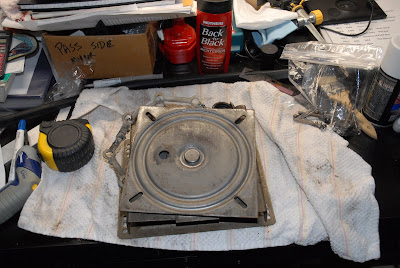 It was raining steel bearing balls when the guy she bought it from brought it into the den (hey, twenty dollars delivered!), so I grabbed one and measured it to be .375". OK, close to the size that's used in my Yaesu antenna rotators, and it looks like a standard inch-size, so off to the web, where I got 100 .375" stainless steel balls for six bucks, free shipping.

Now having used these before in various projects, I've always put enough balls in the races to fill them to 85%~90% capacity, leaving enough space for a generous dollop or two of grease. And silly me, I assumed a mass-merchandised-built-to-low-cost piece of  furniture would use components that were more to a spec I'm used to.

Nope, it used 8 balls caged in a little nylon ring, and a minimal amount of grease or oil. 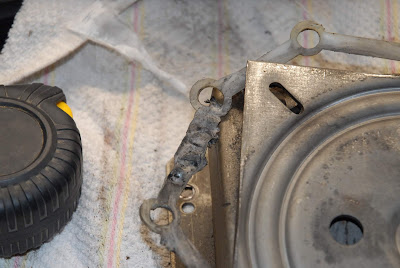 I also learned that this is a "Three Spring" assembly, so it has a different feel than if it had two springs and a solid stop. Previous to learning this, I'd wondered where this piece of a broken spring had come from. You can clearly see where the coil broke on the upper end. I've seen valve springs do this, and it usually attributed to either exceeding the design limits of the spring, or faulty metallurgy. Once I found the spring, and saw the pictures of new units, the failure mechanism became clear. The spring failed, causing the bearing assembly to be subjected to bending moments far greater than it was designed for. The races spread apart, a ball popped out of the nylon cage, got jammed in there, and then jumped out of between the races, and it snowballed from there until the guy put the chair on some local list my wife gets. 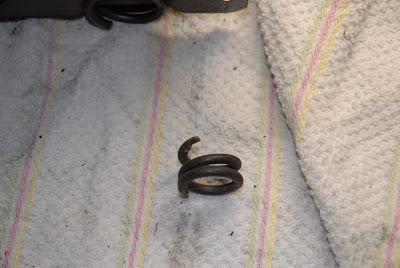 Anyway, it's not economically viable to repair this. The "axle" through the center is peened over on one end like a large rivet, and that stops me right there. I'd have to thread the shaft and use a nut, and that aint gonna happen. The first new one I found was $97, plus undisclosed shipping, but some more searching found the same thing for $47, plus $7 shipping. Now that I know what they're called, I can search deeper. 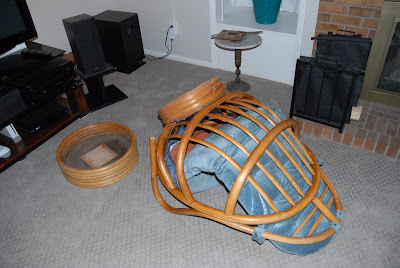 She thinks so, and I don't mind doing it, as long as I can get the parts. I think they're neat chairs, and this one also came with a matching footstool. They're fairly comfy if the padding is good, and the little ones will love that it swivels and rocks. I might have to do something about a potential Pinch Point where the two sections go together and little fingers could go there, too.

Nope, still not my Eames Lounge Chair and Ottoman, but you have to start small, and besides, we saved this from the landfill. 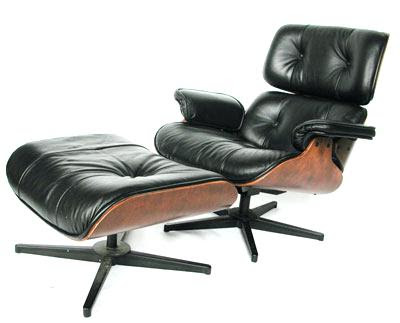