Well. since I was supposed to go in to work Saturday at 1800 for about 6 hours, and was called saying to stand down due to problems with the rocket, my sweet little wife decided sleeping in was too good for me!

She works for the local school district at a magnet high-school, and since they're off this week for spring break, she had scheduled a contractor to come in and refinish our kitchen cabinets.

Yes, I'm quite capable of doing this type of work, but she wants it finished in a week, and it would take me a month......OR MORE!

SO....we unloaded all the drawers, and I cleaned off the small table in the breakfast nook that I use for rebuilding stuff that's too big to handle here in Radio Central.

I then pulled the range hood out of the cabinetry it was stuffed into, as it's pretty old, crummy, beat up, and having electrical issues. Plus it was an almond color that doesn't match our stainless appliances, so we'll get a new one after the cabinets are refinished.

The contractor is coming Tuesday to pull the drawers and doors and start on the fixed cabinets. They'll have one crew back at their shop redo the things they take, while the "local" crew here will do all sorts of things to make the cabinets look nice.

No idea what's wrong with the launch vehicle other than it's more than minor, and all the activities I do are on hold until the issue(s) get resolved.
Posted by drjim at 7:17 PM 3 comments:

Whew....just had a good one roll through here!

Pretty good vertical shaking, followed by some rolling motion, and what felt like an aftershock a minute or so later.

Lowered to 5.1, and centered near La Habra.

Well, the launch vehicle transfer went smooth today, and since I had a ton of stuff to do, I stayed on the ship. About 1300 they started to move it back to the east side of the pier, and it struck me......

This was probably the last time I'll be on that ship when she moves under her own power.

Since she's tied down to the pier until she leaves Thursday morning, and I'm not going with her, I felt a twinge of sadness.

Add up the two times we went on sea trials (10 days each), and the four missions that ran to 30 days due to weather, launch aborts, and other delays, and I've spent well over a year at sea on her.

In The Home Stretch For "My Last Launch"

Been insanely busy the last week running checkouts on our various systems.

I was able to get one of the Linux PC's that runs the weather radar running again by using an external boot device to load a rescue disk in memory so we could run "fsck" on the hard disk and "repair" it. It had been improperly shut down several times, corrupting numerous files, and causing a kernel panic when it tried to load the OS.

And we also finished up 95% of the RF Link testing, and dropped the cable running between the two ships. We use a cable to tie the two systems together for pier testing as we're not allowed to radiate on the system frequencies while in port.

Tomorrow the Launch Vehicle gets transferred to the Platform, and on Saturday they roll out, erect the LV, and run a full-on dry (unfueled) countdown. If all goes well, they put her back in the hangar Sunday morning, and leave Monday morning. The bad thing about Saturday is the satellite people won't be ready to do their RF testing until 2200, so I'll go in about 1800 while there's still plenty of daylight, and train my "replacement" on how to aim some antennas we use, and where all the right knobs and buttons are that he'll have to adjust down at the launch site.

Oh, and I'm working up a whole list of things I just love about this job, and how terribly I'll miss them, but that'll have to wait until August to get published!
Posted by drjim at 7:59 PM 2 comments: 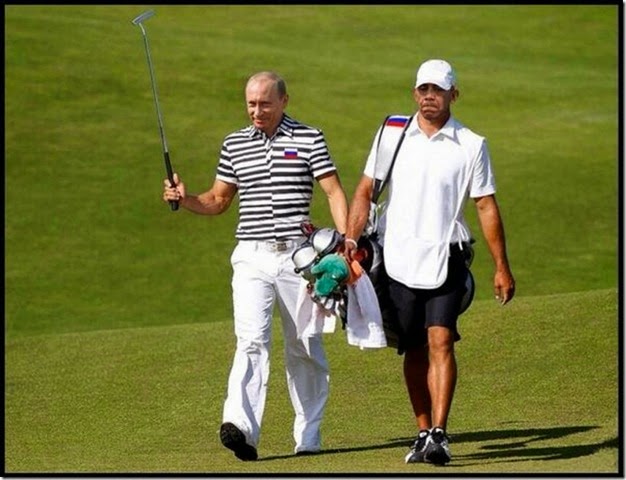 I wonder if he's thinking that Putin's a racist for making him carry Putin's clubs?
Posted by drjim at 7:18 PM 2 comments:

Pat Condell on "A Society of Cowards"

I don't always agree with what he says, and I don't subscribe to his religious "beliefs" (non-beliefs?), but he's usually spot on with his commentary.

This one is exceptionally good.

Really beat after all the running around I did all week at work.

So, while I'm gearing up to attack the Honey Dew list (I swear it gets bigger every day!), and checking my email, I've been listening to this.

I don't care for the man's politics, but he sure can perform.....

Been Pretty Nutso At Work

So, to borrow a phrase I see at other blogs...."Go read the good people on the side bar".

Thanks to everybody who drops by to read my drivel! 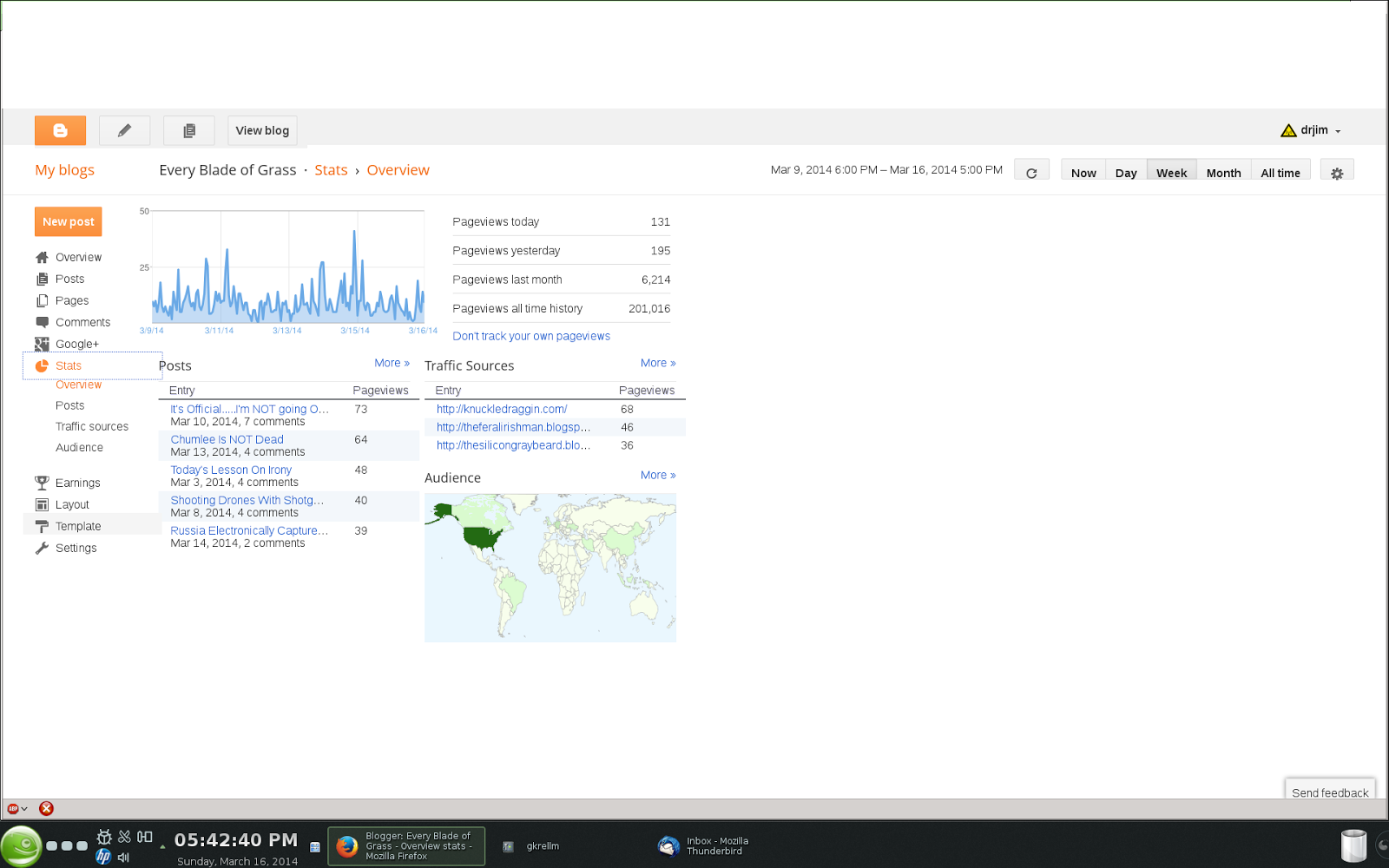 Read all about it here on Breitbart.
Posted by drjim at 8:18 PM 2 comments:

Chumlee Is NOT Dead

One my wife's and my 'guilty pleasures' is watching Pawn Stars.

Besides the interesting items they have brought in, the characters in the show are, well, characters.

Sure, it's staged like most "reality" TV shows, but it's fun to watch.

WELL....my wife came running into Radio Central saying she'd read that Chumlee had passed away from a heat attack.

A quick check of Wikipedia shows he's fine, and now the first hit for "Pawn Stars" on Google is a story where he's Tweeting that he's still with us.

It's Official.....I'm NOT going On This Launch

Well, my Doctor agrees with me. On the basis of the recent lab tests I had, and my description of the medical facilities we have at sea, and the time it would take to get me to a hospital, he has advised me to sit this one out.

My Triglycerides are way up since my last lab tests, and we're both wondering why. I gained back 6 of the 15 pounds I'd lost. so now I'm going to start keeping a log, and counting calories. My wife has an app on her smartphone called "Lose it", and I'll be installing that tonight.

All I have to say is it sure looks like fun!

Oh, well....been pretty busy at work getting ready for the next launch.

The customer finished fueling the satellite today (UDMH) after spending Monday and Tuesday putting the oxidizer (NTO) into it. They take a one day break to clean all the equipment, and make sure the lines are purged.

While they were busy doing those tasks, we've been checking out our telemetry equipment, and some other radio links we use to allow the customer to command and monitor their satellite.

Next week things will really start rolling, as once they've completely fueled and checked out their bird, it will get "floated" from the fueling bay to the encapsulation bay where it will get tested again, and then "encapsulated" into the payload fairing, or "Nose Cone" for all the civvies out there. Then we do the final RF testing, and it gets rolled over to the ACS to get mated to the Launch Vehicle.

After some more testing, and a full-on live data flow from end-to-end going through NASA's TDRSS satellites, it gets transferred over to the Launch Platform.

After some more testing, it get rolled out, erected, and a full-on "dry" (unfueled) countdown takes place, usually a very long day. This is when we make our final adjustments, and the customer runs all their pre-flight tests. Except for fueling the Launch Vehicle, and running our RF systems at reduced power, this is the real thing. If anything goes wrong, it has to be fixed before we leave. Things usually go well, but it still winds up being a 12~14 hour day.

The last launch we did with this customer was a real Charlie Foxtrot, as they didn't follow the script we gave them, they took off for dinner without telling us ( ! ), and I wound up being there 18 hours. NOT a fun day!

If all goes well, the platform stands down for a day, and then sets off to the launch site. The command ship follows four days later, and for this one I'll be on the dock wishing them a "Bon Voyage".

I'll be a tiny bit sad not going on this, my "last" launch, but I don't want to take ANY chances with my health. If I were to have another cardiac episode, it would be a MINIMUM of 36 hours before I could be in a hospital, but more likely it would be 72+ hours. I've been on missions where we had some seriously sick people, and I know how long it takes to get somebody to a "Full Service" hospital.

No thanks, but I can do without that particular uncertainty!
Posted by drjim at 9:45 PM 3 comments:

These three statements tell you a lot about our government and our culture:

And another statement for consideration--

2. We constantly hear about how Social Security is going to run out of money. How come we never hear about welfare running out of money?  What's interesting is the first group "worked for" their money, but the second didn't.

3. The Food Stamp Program, administered by the U.S. Department of Agriculture, is proud to be distributing this year the greatest amount of free Meals and Food Stamps ever --- to 47 million people, as of the most recent figures available in 2013.

The National Park Service, administered by the U.S. Department of the Interior, asks us "Please Do Not Feed the Animals. "The stated reason for this policy is because "The animals will grow dependent on handouts and will not learn to take care of themselves."

And lots of it.

Haven't been on the PC much, as I *finally* got the new one I built a while back online as my daily driver, and had to transfer a ton of data from the old one to this one, and then verify everything transferred over correctly.

But holy smokes has it been raining here! We've gotten almost 3" of rain in the last couple of days, and it's pouring again.

The backyard looked like a swamp this morning, but it had pretty much drained out by 10am, but it's filling up again.

The first winter I lived here we got several inches in about 48 hours, and the "drainage" we have couldn't cope with it, and I was seriously considering heading out the Harbor Freight to get a pump. Hasn't been nearly as bad this year, and this last major line of rain should be through here tonight, and the showers will be tapering off through Sunday morning and afternoon.

Pebbles (the dog) heard her first thunder this afternoon, and jumped out of her bed running around to see what made the noise. The next boomer that rolled through startled her pretty good, so I calmed her down, and now she seems used to it.