Being a hard-core Amateur Radio operator, one of the things I most look forward to is our annual "Field Day", which is always the last full weekend in June. This year it's the 27th and 28th. Field Day is supposed to be a 24 hour test of our emergency communications capabilities, so we go "off the grid", and set up to operate away from our usual home stations. It's an excellent drill, as we drag out stuff we've had put away since the last Field Day, set it all up out in the boonies, and try and make as many contacts with other stations as we can. My club, the United Radio Amateur Club is normally based out of the Los Angeles Maritime Museum in San Pedro. For the last 14 years or so, we've been operating Field Day from the Upper Reservation of Fort MacArthur. "Fort Mac" is a really cool place, having originally been a Coastal Artillery base, and then a training base for Army personnel who were headed overseas. it was also a Nike base in the 50's, and is on the list of National Historic Places.
Primary operation on Field Day is "HF", more commonly known as Shortwave, but we also operate some of the more esoteric modes, like digital communications, Slow Scan TV, and satellites. What's that you say? A bunch of AMATEURS have their own satellites? Yep, we hams have been in space since 1961, and actually had the first orbiting satellite capable of actively relaying radio messages, OSCAR-III. We beat the commercial guys by a couple of months, and some of them are still sore about it! How we hitched free rides into space when rockets were still of questionable reliability is quite a story. This link has the best history of Amateur Radio Satellites I've ever found, and is fascinating reading if you're a TechnoGeek like me. I'm the "Satellite Guy" in my club (it's what I do for a living), so I've been getting ready for my role at Field Day. I've spent all weekend (so far) getting my satellite antennas, Azimuth and Elevation positioners and the controller assembled and checked out. I haven't used my "Big Guns" in 4 years, so I had a lot of cobwebs to blow off, hardware to check, and software to update. The girlfriend's backyard isn't quite big enough to mount my full-sized Yagi's on the crossboom going through the elevation rotor, so I faked it with two pieces of mast standing in for the 2M and 70cm antennas. At least it lets me watch the "antennas" follow a satellite through the sky. This is the first time I've had full PC control of azimuth and elevation, and it's pretty neat to watch them "track" a bird going through the sky.
Sunday I'll get the radios and power supplies checked out, and then plug it all together and see how well my laptop controls pointing the antennas at a moving target, and compensating for the Doppler Shift on the downlink.
As we say in the radio biz, "Stay Tuned For More...."!
at June 13, 2009 5 comments: 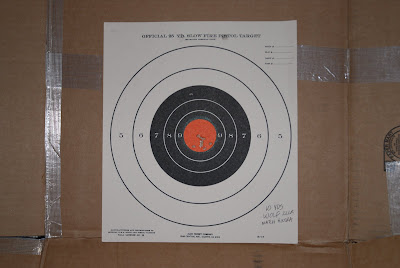 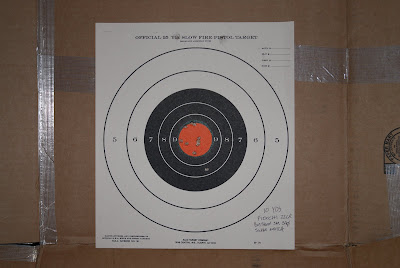 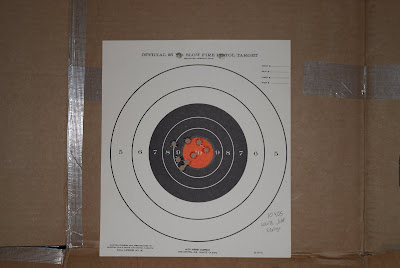 OK, boys and girls, here's the results from my trip to the range with my Kimber 22LR conversion kit for my Kimber Custom TLE-II.
All targets at 10 yards, as measured with my Bushnell laser rangefinder.
This is NOT a very scientific test, so YMMV!
First up is some Winchester "White Box" 230gr JHP ammo I bought at the range the last time they had it in quantity to sell. I bought a box of 500 rounds for $250 out-the-door. All it says on the box is "Personal Protection" and the stock number is "USA45JHP". It seems hotter than the 230gr FMJ WWB that I usually shoot, and leaves more little grains of powder on the bench at the stall. No idea what the MV is, as I don't own a chrono....YET! It does seem to kick a bit harder, and make a bigger BOOM, but that's all subjective. I haven't fired the two back-to-back, but maybe I'll take some of each next time.
Next is some Fiocchi 22LR "Biathlon SM 340 Super Match" made in Italy that I bought from Midway. No particular part number on the box.
Lastly is some Wolf 22LR "Match Extra", made in Germany, that I also bought from Midway. One thing that struck me about the Wolf is how greasy/oily it is. I had to wipe my fingers off after I loaded the magazine! The bullets are almost black, compared to the Fiocchi, which has bullets that look like good old cast lead. The one 'flyer' happened when the guy in the next lane let off a 44Mag right when I was squeezing the trigger. Yep, I flinched and mashed the trigger.
Installing the conversion kit is a snap. Just take out the barrel bushing and plug so you can move the slide back to get the stop out, remove the barrel/slide assembly, and then install the new barrel and slide for the 22 conversion kit. The magazines are made of what looks to be glass-reinforced plastic, and hold 10 rounds. The spring is light, and it's very easy to put the rounds in the mag.
The new slide comes with "Target Sights", and I didn't adjust them. It seems to shoot a little low at 10 yards, so I just adjusted my point-of-aim to compensate for it. It also chews up my left index finger when I rack the slide, so I'll have to be a little more careful next time. As far as recoil goes, it almost feels like my Airsoft pistol, which is to say about all I felt was the slide coming back. And after firing the 45ACP, hearing the little "POP" from the 22 almost made me think "squib round".
The Fiocchi worked 100%, but I had a couple of misfires with the Wolf. One round wouldn't fire after three tries, so I waited about 30 seconds and ran the slide to eject it. It looked like it had a good hit from the firing pin, so I'll wait until I fire more of it before I pass judgment on it. The last class I had was a Tactical Shotgun class, and we had a bunch of "bad" ammo that wouldn't fire.
These days it almost seems that we're lucky to get *any* ammo to practice with.
at June 07, 2009 8 comments:

The gf and I went to see "Ring of Fire" Friday night at the La Mirada Theater. It's a great place to go see plays and musicals, and we have a season ticket for two. "Ring of Fire" is what's called a "jukebox musical", where a group of songs from an artist are selected, and made into a play. "Mama Mia" is the same format, made from a group of ABBA's songs.
It was waaay better than I expected it to be, especially for opening night. The performers were absolutely first-class, and the selection of songs was excellent. They were in-tune, never missed a beat, never flubbed a lyric, and it was the best performance I've seen there.
If you live in the area and enjoy live music, go see it, you won't be disappointed!
And I'm off to the range now to see how well my Kimber 22LR conversion kit works. I'll post back later.....
at June 07, 2009 No comments:

Kimber 22LR Conversion Not Yet

Sorry everybody, but I won't have time to get this to the range before Sunday afternoon.
I'll do some of my 7-yard "testing" with the 45 slide and barrel, and then switch to this.
Photos WILL be posted!
I've just got too much Radio Stuff to do the next couple of days.
Oh, and it's the girlfriends birthday. Hmmmm...better take care of that first!
Trust me, she's a "keeper"!
at June 04, 2009 2 comments: 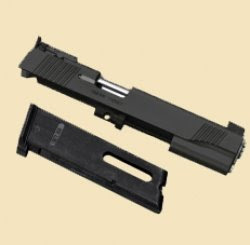 With the cost of 45ACP going through the roof (*WHEN* you can find some!), I broke down and bought the Kimber 22 Long Rifle conversion kit for my TLE-II. I haven't had a chance to shoot it yet, but it's typical Kimber quality, slips on the gun in less than a minute, and should allow me to keep most of my 1911 skills sharp without breaking the bank, or depleting my stock of 45ACP.
It's very nicely made, came with a polymer magazine, all in a nice hard case.
At the going rate of 45ACP vs 22LR, I figure it should pay for itself after about 600 rounds. That might sound like a lot, but I go through about 150 rounds every time I go to the range!
at June 01, 2009 6 comments: