Most of the visitors to my little place in the blogosphere undoubtedly know about "The Three Per Cent".
If you don't, I'd like to ask you to read this piece written by a man I truly admire.
One term Mike brought up was "Gramscian". which I'd never heard, and being a good teacher, he suggested we look it up ourselves.
So, I did, and leaned that it comes from the name "Antonio Gramsci", an Italian philosopher and political Scientist. Now since I was schooled in the Hard Sciences (Physics and Engineering), I tend to chuckle a bit when I see the term "Political Science". It's too much like "Jumbo Shrimp" for me not to laugh, but I went ahead and read his bio anyway.
Very interesting stuff there. In particular, he's the guy that came up with the term "Cultural Hegemony", which is basically a fancy term used to describe the dominance of one social group over another, in this case, a "Ruling Class".
Now when I read this, it just about knocked me over. It's exactly what I've been feeling from the "candidates" the Left has been pushing on us for years. It first struck me when I listened to John Kerry give one of his speeches. It was quite clear to me that the man was talking down to his audience, and I, for one, deeply resented it. There are other things I despise about John Kerry, but his tone of voice and demeanor on the podium struck me like a ton of bricks. Al Gore kinda sounded the same to me when he was on his "Global Warming" stump, but he can also pull off the "Fatherly" bit better than Kerry ever could.
But I digress.....
One other thing that I found interesting as I looked up Gramsci and followed the links, was that they all have Marxism in common. And considering the friends and acquaintances of our "President", it looks like the USA has finally got a bona fide "Ruling Class" leader. One who cares not for the people who voted him in, but only for his own agenda.

God bless, Mike, and keep up the Good Fight by writing these pieces that get the rest of us to THINK, and in inspiring those of us who truly believe in the Republic of our Founders.
at February 27, 2010 5 comments:

Light posting for a while....

Not that I'm a posting maniac, but the YF (see below) and I have been rather sick. I started with a bad sore throat the week before the wedding, which degenerated into a really bad cold and cough, which I still have, but at least I don't wake up every two hours coughing at night. She started with the sore throat a couple of days ago, and has been home from work the last two days.
I keep kidding her about who she sleeps with!
"YF" is a Ham Radio term for "Wife". If a Ham is going out with a girl, she becomes his "YL", or "Young Lady". If they got married, she then became his "XYL", or "Ex Young Lady". Even when I first got into Amateur Radio back in 1964, I thought it was kind of rude, and sometime in the 1970's Hams apparently saw the light, and came up with "YF".
at February 24, 2010 4 comments:

As usual, Blunt Object has some good posts about the continuing travails of the guy who writes "Things I Won't Work With".
Dioxygen Diflouride??
Geez.....I don't even want to be in the same county with that stuff, let alone *work* with it.
at February 23, 2010 4 comments:

Quote of the Day

Shamelessly ripped off from the Geekwitha45, who found it elsewhere.

“The danger to America is not Barack Obama but a citizenry capable of entrusting a man like him with the presidency. It will be easier to limit and undo the follies of an Obama presidency than to restore the necessary common sense and good judgment to a depraved electorate willing to have such a man for their president. The problem is much deeper and far more serious than Mr. Obama, who is a mere symptom of what ails us. Blaming the prince of the fools should not blind anyone to the vast confederacy of fools that made him their prince. The republic can survive a Barack Obama, who is, after all, merely a fool. It is less likely to survive a multitude of fools such as those who made him their president.”

As some of you may remember, I'm going to marry my sweetie this Sunday, Valentine's Day. SO....I'm going to be pretty busy the next week or so. My sister, whom I haven't seen in almost 20 years, is coming out from Chicago with her husband, which means starting tomorrow, I have some serious house cleaning duties to take care of. Not that I shirk off my share of them, but I've been doing some part-time design work for a little local company, which means I've been getting my CAD and printed circuit board design skills "back online" during last week or so. And I've just GOTTA get my Jeep emptied out and washed!
Not doing much for our honeymoon but spending the night on the Queen Mary, and then escorting my sister and her husband around to see some of the sights while they're here. My sister used PriceLine with the "Name Your Price" option, and not knowing the area or checking with us first, wound up booking a hotel in one of the WORST parts of Long Beach. OUCH! Normally using the "Name Your Price" option means you're stuck with whatever you bought, but she was able to talk her way out of that hotel, and into a much nicer one that's actually closer to us, and only had to pay a $25 cancellation fee.
Oh, well....time to get the computer/radio room cleaned up, and then start on the house while the gf is at work tomorrow. Her coworkers threw her a surprise wedding shower today, and we received a beautiful cake-cutting knife and cake serving thingamajig for use at the reception.
Talk to (at?) you all later....
at February 10, 2010 5 comments:

meh....I *hate* football. No other sport can take a sixty-minute game, and stretch it out to over four hours.
Ridiculous.
There, I feel better.
at February 07, 2010 2 comments:

Alfonzo Rachel Is Funny, And RIGHT!

In case you don't know, he's the guy that does the outstanding "Zonation" videos. He's not only entertaining to watch, but spot-on about how the left marginalizes people and issues to suit their own agenda.
I found quite a few of his videos posted over at "Big Hollywood", so go kill some time, listen to the man, and enjoy yourself.
at February 03, 2010 1 comment: 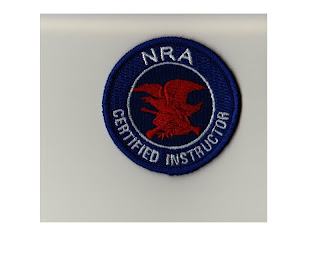 Two days, 17 hours of classroom and range work, and I'm now an "NRA Certified Basic Pistol Instructor".
The course was in two parts, the "Basic Instructor Training", and the "Pistol Instructor Training".
A lot of the instruction was geared towards teaching us how to teach. We did a lot of presenting to each other, and proper SAFE gun handling was stressed. MUCH emphasis on the NRA "Three Rules" (ALWAYS keep the gun pointed is a safe direction, ALWAYS keep your finger off the trigger until ready to shoot, and ALWAYS keep the gun unloaded until ready to use), and I was surprised they didn't have rule #1 as "Treat ALL guns as loaded", which is the first rule stressed in other training I've had at the range. Our first presentation was to take a bagged pistol out of the instructors large bag, open it up, and make sure it was unloaded, explaining all our steps to the class as we went along. The first student drew a Springfield XD pistol and did it perfectly. I was next, and drew a cap and ball pistol, something I've never even *seen* in-the-flesh before, let alone handled. Talk about having a "DUH!" moment! I was able to pretty much figure it out (no percussion caps installed=no bang!), and explained that to the students. I had no idea how to remove the cylinder (HINT: You have to push the "Wedge Pin" on this particular gun, a 44 caliber Colt Navy Model, through the frame...NOT easy to do!), and fumbled my way to explaining that you could use the loading rod to check if there was any ball/charge in the chambers of the cylinder. The instructor laughed and said I did OK. The next guy drew a flintlock, and we all had a good laugh while learning about safeing older pistols that we had no experience with. He stressed the CONCEPT of how a firearm works is important to remember, and that you just might have somebody bring you "Grandpas Old Gun", and it's vitally important you can handle it safely.
The training was fast paced, as there's a lot of info to cover in the 17 hours, and the instructor, who I've trained with before, was excellent.
Another element of the training I didn't expect was the emphasis on how to run the more mundane aspects of teaching a course, like promotion, budgeting, emergency/first aid preparedness, and all the little details involved in record keeping.
All in all, an excellent course, and I should receive my credentials in about 60 days.
at February 01, 2010 11 comments: