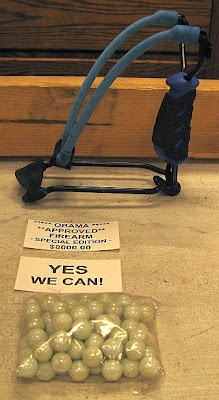 This has been at the range I go to for several weeks now.
H/T to The Wandering Minstrel for posting it.
at May 25, 2009 6 comments:

Email ThisBlogThis!Share to TwitterShare to FacebookShare to Pinterest
Labels: 2a, approved weapons, RKBA

Time to give our thanks to those who've helped keep us free all these years. My Dad was a SeaBee during WWII, and while he never liked to talk about his experiences, he did teach me to respect veterans and how to shoot a 45.
I still do both.....
God bless our veterans. We can never thank them adequately.
at May 25, 2009 2 comments:

Well, summer movie time is here, and being a huge fan of the "Terminator" series, we just had to go see this one. I remember seeing the first one and thinking "Great movie", but then the second one just blew me away. I still think "Terminator 2 : Judgement Day" is the best of the four, while the third one marked a shift towards new things, as Ahhhrnold is getting older, and has other problems than the studios to deal with right now. "Terminator Salvation" is interesting in that it gives a bit of back-story into Skynet that's never been told before. I don't want to give away too much in case you're planning on seeing it, but if you liked the other three, you'll probably like this one. The SF/X were VERY good, the acting decent, and the action non-stop.
Besides, it has the best looking A-10 pilot in the known universe!
Happy Memorial Day Weekend to everybody, and God Bless our troops, both past and present.
at May 23, 2009 2 comments:

Email ThisBlogThis!Share to TwitterShare to FacebookShare to Pinterest
Labels: movies, sci-fi, the terminator

YOW....just had a 5.0 a few miles from here. REALLY shook stuff up, knocked a few things off my shelves, but no damage I can see. Checked the building, and all seems OK...no broken glass or anything. The phones are still out (par for the course), but I emailed my son and girlfriend, and they're OK.
This is the fourth big bump I've been through since I moved out to SoCal in 1980, and the first time it rattled *me*!
at May 17, 2009 6 comments:

A (Mother's) Day At The range

The girlfriend and I spent several hours at the range today. Both her sons are grown, and only the youngest is still in the nest, but he has a gf of his own, so he's out quite a bit. Anywhoo...I asked what she wanted to do this weekend, and besides going to the Star Trek movie, she wanted to go to the range. So, we stopped back at my place, picked up "her" revolver (A S&W Custom Shop TRR8), my Sig P226, my Marlin 1894, and six boxes of ammo. She does quite well with her revolver, and I suggested she try my Sig. She didn't care for the trigger (I don't like it, either), but the recoil and muzzle blast didn't bother her a bit. She wasn't hitting quite as good as she does with the TRR8, so we went back to shooting that one for a while. I got the Marlin out, explained how it worked, and fired a few shots at the target, which I had moved all the way out to the end of the range, about 50 feet. My first shoot was almost dead-center, and the next five were "9 Ring" or better, pretty darn easy to do with a rifle at 50 feet! I let her try it, and after a few shots she put it down and said she wasn't used to holding something heavy in a position like that, and gave it back to me. All in all, we had a great time, ran into one of my instructors, and she got to fire a few different guns today.
The highlight of the day (for me, anyway) was when she turned to me as I was putting the rifle away and said "Honey, if we're ever in the middle of nowhere, and you have to use your guns, I know you'll be able to put food on the table, and keep us safe".
Gee, and a year ago she had "Terminal Flinch" every time we went to the range and somebody else let off a big bore pistol!
at May 10, 2009 6 comments:

Well, the gf and I just returned home from watching the new Star Trek movie, in IMAX, no less.
It definitely had moments of brilliance in the acting, and the SFX were extremely good, but I thought (HERESY!) the plot was a bit thin in spots. I won't go into it because I don't want to spoil it for anybody who's planning on seeing it, so, NO SPOILERS!
The actors were superb for the most part, and I could see them "aging into" the characters on the original series. The first time Kirk sat in his chair, crossed his legs, and propped one arm on the armrest, you *knew* it was Kirk. The actors who played Spock and Dr. McCoy were just as good, and Captain Pike was great.
This was the first time I've seen a theatrical release in IMAX, and while it's not quite the same as seeing an IMAX *film* on the seven story high screen ( they use a DLP...Digital Light Processor instead of 70mm film ) at the California Science Center, it's better than any other "movie" I've ever seen. They made a big deal out of the 12,000 Watt sound system, but I didn't think it sounded any better than a good THX movie.
If you like Star Trek, by all means go see it. heck, even if you don't like Star Trek, but do like a good summer action movie, go see it!
at May 09, 2009 2 comments:

Ahh....forgot it was May! Woke up this morning, flipped on the Boob Tube, and the first day of qualifying for the Indy 500 is on.
Justin Wilson was the first guy up, and stalled the car twice before he got a little more aggressive with the clutch, and came roaring out with the wheels spinning. I've always been a car-nut and auto racing fan. Mostly "Sports Cars", and I used to compete in the SCCA events back when I lived in the midwest. I used to follow open wheel racing in the U.S., and after the USAC/Indy Car split I mostly followed the USAC "Champ Car" series. it's too bad they split because it did some serious damage to the open wheel series here in the U.S. it's hard enough for most people to keep track of the various types of auto racing here (NASCAR? USAC? Indy Car?, NHRA? DUH!), and TWO open wheel series was just too much, and they both suffered. Now that they've merged again, it'll be interesting to see if they can get their momentum back.
at May 09, 2009 No comments:

Obama and ACORN GPS Marking EVERY Front Door in America?

Now THIS is scary!
H/T to an anonymous poster on Sipsey Street Irregulars.
Article here: Canada Free Press
at May 05, 2009 2 comments:

A Day At The Range 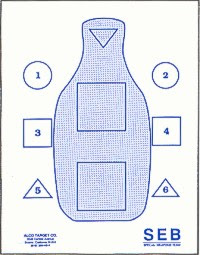 Ahhhh...I feel so relaxed after putting 350 rounds downrange!
Practiced my presentation from close-ready, my trigger pull and reset, emergency reloads, and worked to improve my stance. I tend to 'blade off' a bit too much, so I'm trying to maintain a more 'square' stance. Of course if I was shooting from cover I'd take whatever stance I needed to prevent exposing more of myself than necessary, but that's not 'target' shooting. Went through a bunch of SEB targets, and I can get three, quick shots into the upper box, all within a few inches of each other. Still can't quite do a couple of slower shots smack into the upper triangle after the first three, but almost all of them are either on the edge, or in the triangle.
Hmmmmm..."How Do I Get To Carnegie Hall?"......PRACTICE!
And I can drill the circles, boxes, and triangles along the sides without problem.
I also ran into a friend of mine I hadn't seen in several years. I never knew he was into shooting, so it was fun to catch up on old times, and do some gun talk.
at May 03, 2009 9 comments: 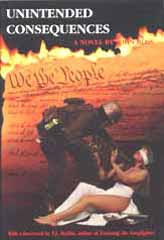 After finishing "Atlas Shrugged" by Ayn Rand, and "The Decline and Fall of the American Automobile Industry" by Brock Yates, I started in on "Unintended Consequences" by John Ross. I'm only a hundred or so pages into it, but it's quite good so far. I'd never heard of it until I got involved in blogging and started shooting again. They tend to go for over $100 at Amazon, so I shopped around a bit and found one on eBay, brand-new, still shrink-wrapped, for $60. Since then I've seen them for anywhere from $25 to $160.
It's one of those books I think should be in every RKBA person's library, so shop around and grab one.
Here's a little background courtesy of the Wikipedia.