Thank you to all those (and their families) who have paid the ultimate price for our freedom.
And thank you to all those currently serving in our Armed Forces. May you complete your tours safely, and return whole to your loved ones.
My parent's always called it "Decoration Day", as we'd go to the cemetery in the morning and put flowers on the graves of our family members. I always helped Dad put up the flag in the morning, and take it down at dusk.
at May 30, 2010 4 comments:

Getting a new PC ready for the living room. It's the one my wife uses, and the Windows XP Media Center installation on the big Dell Dimension E510 she bought several years ago has gotten rather "constipated" with sludge, as Windows has a tendency to do. It's had so much stuff installed and then uninstalled, that the Windows Registry is gunked up, and all the utilities I have can't get it clean again. Sad, but true, the only way to get it running smoothly again will be to do a complete wipe of the hard disk, and reinstall Windoze. Such is life in the Windoze Universe!
BUT...my son the budding Photojournalist has decided to go 100% Apple Mac, as all the specialized software he uses for photo editing, video editing, and publication runs much better on the Mac, and since he's been doing this since high-school on Macs, it makes perfect sense for him to go this route.
Two years ago, I built him a Bleeding Edge PC, that was right at, or slightly beyond, State Of The Art, and ran rings around any "Store Bought" PC system, even the high-end ones like Alienware and VoodooPC build. He pulled the hard drives out of it as they have all his work product, and dropped it off here last night.
I pulled it apart, cleaned all the dust out of it, pulled the heatsink/fan off the processor and cleaned the original thermal grease off, and put some Arctic Silver 5 on it. I also neatened up the wiring, and installed a new 300GB Western Digital 10,000 RPM "Velociraptor" hard disk.
I put Windows 7 Professional on it this morning, installed the latest versions of the drivers for the motherboard and video card, and installed all the programs my wife uses a lot, like Microsoft Office, Adobe Acrobat, and a few others. I'm just finishing up getting the drivers for our printer and other devices, and so far so good. It's scoring a resounding 7.5 on the Windows Experience Index, quite amazing for a two-year old PC, but then I put the best available parts in it when I built it. And with the type of computing we'll be doing with this PC, it will run as cool as the proverbial cucumber. Her Dell blows HOT air out of the vents when we start cranking it up, so this one should use less power, and save a few bucks on the electric bill.
Oh, well....time to get back to "work" here!
at May 18, 2010 5 comments:

They caught one of the dirtbags.
Here's hoping she rolls on her partner.

WLS-TV has some video, and a print story about my buddy's brother, along with an interview with his daughter.
Interesting.
at May 14, 2010 5 comments: 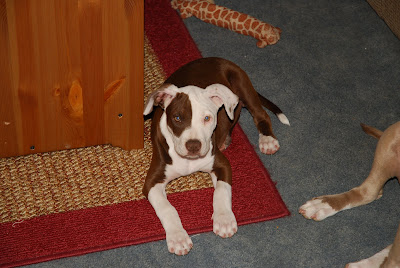 Well, after a suitable time of mournng, and watching our other dog and my wife mope around, her son and I decided it was time to welcome a new puppy into our home. He's been looking for a while, so I told him when he found one he thought was good, let me know, and I'd give him half the cash.
Thursday night, he and his girlfriend drove up to see the dogs, and brought home this little girl. My wife named her "Coco" because of her color, and she's a sweetie. Very good disposition, and our other dog, Diamond, has taken to her like we couldn't believe. She watches over the pup like a mother hen, and they play together all the time. It's fun to watch, but Diamond weighs about 80 pounds, and when she's tearing around with Coco, it's best to keep out of the way!
We're still working on getting her trained to go outside when she needs to, but so far the 'accidents' have been few.
at May 12, 2010 4 comments:

I'm a big fan of Jeff Cooper. He taught us The Modern Technique, and was a skilled writer. My favorite book of his is "To Ride, Shoot Straight, And Speak The Truth", although I have most of his other books. And I have the DVD of his life story, "Jeff Cooper, A Man In Full", which is quite entertaining.
Lt. Col. Cooper would have been 90 years old today.
at May 10, 2010 3 comments:

A few weeks ago I posted about my best buddy's brother who was shot during an armed robbery in that "Brady Paradise" otherwise known as Chicago.

My friend's brother wasn't quite as big a sportsman or shooter as his older brothers were, but he did know his way around guns enough that if he would have been able to own one, it might have saved his life, or at least made the robber flee.

He fully complied with the criminal that shot him, and yet he was shot anyway.

So much for going unarmed, and "Give them what they want" as a means of providing for your own "safety".

My thoughts and prayers are with my friend and his family today.
at May 08, 2010 8 comments: 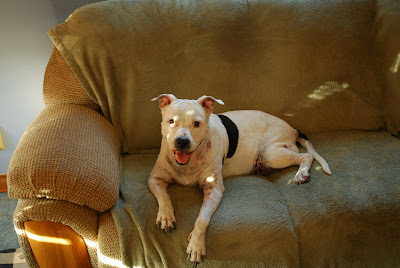 Today was one of the saddest days I've had in a long time.
Our old dog Domino had to be taken on her last ride to the vet tonight.
She was a few days short of 14 years old, and was just plain tuckered out. The last couple of times I had to take her in, the vet told us it was getting to be her time, and we should get ready for it. She had gone deaf about a year ago, and was diagnosed with progressive congestive heart failure and pulmonary edema a couple of years ago. Her lungs kept getting full of fluid, and the meds we were giving her just weren't working anymore. Over the weekend we think she had a stroke, as she was having trouble walking, her tail was always between her legs, and her left eye was pointed up and fixed, while her right eye was normal. Even our young dog Diamond knew something wasn't right, as she was being very protective of Domino, and was licking her face a lot. Last night she started gasping for breath, and was wandering around all confused. She seemed better this morning, and was enjoying the sunshine outdoors while I was doing yard work, but by the time my wife got home from work, she had taken a turn for the worse, and was gasping, wheezing, and "gurgling". These were the extreme symptoms the vet told us would be very evident when it was her time, so we called him, and he said to bring her in. He has a separate room for this, and we went in there and got her up on the table. He gave her the shot, and I held her until she passed on very quietly. We said our goodbyes to her, and came home in tears. This was especially hard on my wife, as she'd raised Domino from a pup, along with Domino's mother, who we had to have put to sleep a couple of years ago.
Goodbye, my friend. I hope to see you on the other side.
at May 04, 2010 16 comments: