Well, having a case of the cruds can make time almost irrelevant.

Since I'm feeling better, I swapped out the wife's snow tires for her summer tires. Should have done it a while back, but one year I did it 'early", and she had some trouble when we got clobbered with a late spring snowstorm. Oh, well.....

And watering and weeding season is upon us. The grass is starting to green, but the "nuked" backyard is having some trouble. The weeds, of course, don't mind the bare dirt; they see it as an opportunity to spread. So I mixed up some Weed-B-Gon, and spot treated all the things that are growing that we don't want. Tomorrow I'll mix up some Round-Up 360 and spray the gravel beds. Damn cottonwood seeds are starting to sprout, and if you don't hit em with a brick, they'll take over.

And on a happier note, the USS The Sullivans has been partially refloated. 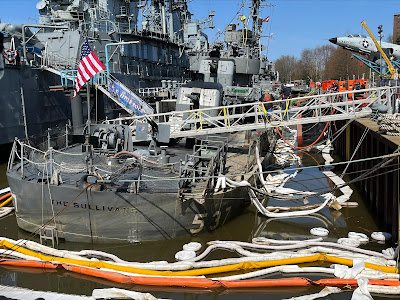 Hope y'all have a great weekend, and  be safe this coming week.

Ah, Crud......Sinuses Are Killing Me Today

Work up this morning with a head full of slime, and a mouth as dry as the Sahara from having a plugged nose all night and mouth breathing. Never been accused of being a "Mouth Breather", so it must be a hidden talent.

Had a bunch of TODOS to-do to-day, but it doesn't look like much will happen on that front until to-morrow....

Apologies to BillB for not getting your rotor to FedEx to-day.

Welcome To The Weekend

Nice weather here, up to 87* today, but there's a front coming through, so it's cooling down and hopefully we'll get some rain. There's a winter storm warning for the Rocky Mountain Nat'l Park, extending up through the Medicine Bow Range, which starts at the Northern end of the Never Summer Mountains. 6~12" of snow forecast, with winds up to 65MPH. Over on The Plains, they're having winds of ~40+ PH, with gusts going to 75MPH. And NOAA has issued a severe blowing dust warning fo most of the Eastern part of the state.

Tried my hand at just monitoring 6 Meter Meteor Scatter last night for the April Lyrids, and was rewarded with this: 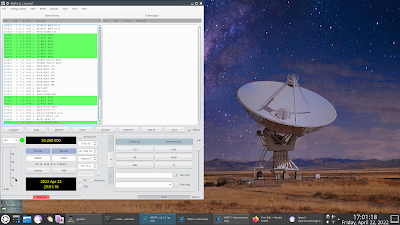 The highlighted entries in the log are people calling "CQ", and from the recorded signal strength levels, I could have worked most of them. But not being the Night Owl I used to be, I was fast asleep. Still, that's a whole lot more than I expected to receive just using my 20 Meter vertical antenna. I have a 6 Meter dipole I'm planning on putting back up, and a 5/8ths wave 6 Meter vertical that will be going up as soon as my son and I dig the holes and set the poles. I had a very similar 6 Meter antenna back in SoCal that a friend had loaned me, and when the band was open, it was really, really, really good.

Have a good weekend, and be safe out there!

Warmest so far this year. Should be like this all week, and then drop down into the 50's/60's for a few days.

Trees are full of buds, lawn is greening up, and all the flowers have come back from the dead in the front garden area.

Time to bust out my Ross Root Feeder and give the trees and shrubs a Spring boost.

Y'all be safe out there! 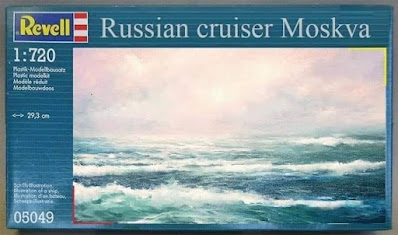 I've heard it's quite difficult to build as you can't find all the parts....

Ukrainian stamp honoring the solders who were captured on Snake Island. 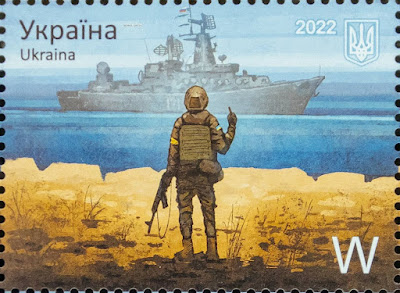 Between the botched flooring, and the delays, and then the plumbing leaks and plumbing repair, I've been a tad busy. It's also the start of the Spring Lawn Care Season, so there's been a lot of that going on. Hoses to lay, newly seeded areas to be kept moist, and trees and shrubs to feed.

And The Little guy was over Thursday night and all day Friday, then The Kids came by for dinner with the New Little Guy, who's taken quite a shine to me and my funny noises and faces.

ANYWAY..... I had most of the parts and a sketch, so I sat myself down and built these up. 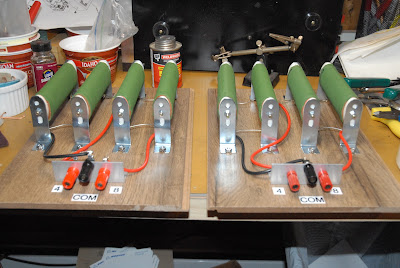 The resistors are 8 Ohm, 100 Watt, Non-Inductive resistors in a series/parallel connection. It gives me 8 Ohms at 400 Watts, bigger than any amplifier I'll most likely encounter. I also tapped the point between the two 4 Ohm sections, which also gives me 4 Ohms at 200 Watts, also more than any amp I'm likely to encounter. 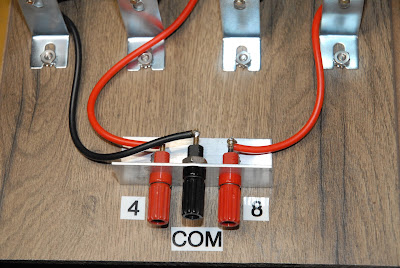 So now that I have these, and all my Test Equipment appears to be squared away, I can finally get back on the big Pioneer SX-980 receiver that's been a doorstop the last few months. 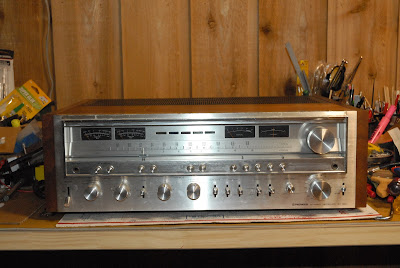 YAY! Plumbing All Squared Away

Well, the plumber was back today to reseal the two downstairs toilets. The one off the laundry room wasn't screwed down to the floor securely, which means it will rock back-and-forth, and eventually break the wax seal. It showed no sign of leakage....yet.

The basement toilet was just sitting on the floor...NO bolts, with the decorative caps just sitting where they're supposed to be covering a bolt. It didn't show any signs of leakage, either, but he said it was an accident waiting to happen. I made a crack about it "Not Even Being A Home-Owner Grade Repair", and agreed with me, saying even a home owner knows enough to go get the missing parts.

The drywall guy came and inspected the garage ceiling, complemented me on ripping the soggy stuff out, and said it would be about $175 to replace the drywall and fiberglass insulation, tape it, and paint it.

I estimate the plumber's bill will be about $600, labor and materials.

Oh, well...save $1k on the flooring install, and give $800 to other contractors to fix the mistakes the "flooring guy" made.

And the Ham Radio bands have been very good this week. While Mike The Plumber was here, I talked to several Japanese stations, some South/Central American stations,  heard some Europeans, and several stations from "Down Under", all on 12 Meters/24MHz, which hasn't had any activity since the peak of the last Solar Cycle.

Nice to see Cycle 25 off to a roaring start.

From a friend of mine. Quite fun to watch and pick out which movies they took the clips from.

This Is NOT How You Seal A Toilet To The Floor!

We had a local plumbing firm come out to repair the leaks caused by the :handyman" guy who put in the flooring and new steps. That fiasco could be a post all it's own. Suffice to say I would have given him a "C-" for the work he did, until the leak started.

This is what the plumber found under the toilet in SLW's bathroom: 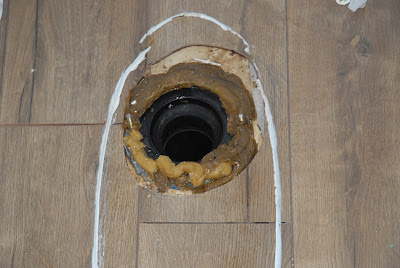 I don't know what the heck he used in place of a proper wax ring, but it looks like it was squeezed out of a tube. The plumber said he'd never seen anything like this, as even "Home Owner Level" repairs he'd seen at least had the correct sealing rings used. She was gone for the week after the work was "finished", so her toilet wasn't used, but mine was in daily use.

The one in my bathroom was worse, as the floor flange was loose, caused by using too small hardware to hold it down. The heads of the flat-head bolts holding the flange to the floor were small enough to pull through the dimple in the flange, causing the flange to loosen up, and combined with the wrong size wax sealing ring, allowed water to leak down the outside of the drain pipe, and run along to the lowest spot, where it dripped off and soaked the drywall.

I ripped all the soggy drywall and insulation out of the garage ceiling, and put a fan on it do dry it out, which is easy to do this time of year as it's so dry here.

The aftermath in the garage: 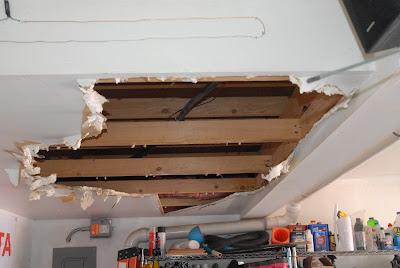 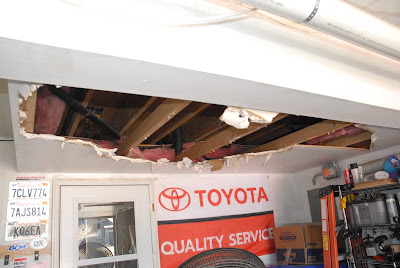 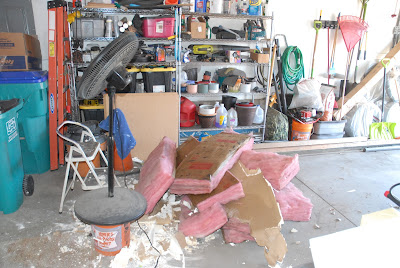 Aggie Plumbing, who I can't say enough good things about, will be back on Monday at noon to pull and reseal the two downstairs toilets. Considering the "quality" of the work the handyman did on the upstairs toilets, we think it's a wise decision to pay the man, and have the other two toilets checked, and most likely resealed.

And they gave use a referral to a guy who does drywall repair, so he'll be out here on Tuesday to repair my  Damage Control activities from when the leak started.

ANNNND SLW had a "talk" with the handyman, who politely told us to cancel the balance owed on the contract, keep the remaining materials, and it was nice meeting us. He's a good guy, but his skills are lacking in a lot of areas.....