WELL......I finally did something about all the glop (aka Tape Residue) on the rear hatch.

When I first pulled the spoiler off I wanted to do something about the holes in the hatch as I was afraid they'd allow rainwater to get into the car, so I slapped some blue "painter's tape" over the holes. After a few weeks in the Kalifornia sun, the tape degraded, so I put another layer on.

And another.....finally ending up with some aluminum foil tape over the holes.

After a few years, I figured I should pull the tape off, only to find it left an impervious layer of adhesive residue on the paint.

And I mean impervious to every solvent I had, including spit. I tried citrus-based cleaners like "Goo Gone" and "Goof Off", solvents like acetone, mineral spirits, "Brake Kleen" and even Birchwood-Casey "Gun Scrubber" which I've found to be a very good solvent for many things.

The adhesive residue was at least as bad as the remnants of the Supra decal on the rear.

So, Friday night I made the decision to SAND it off, and just accept whatever paint damage was going to occur. 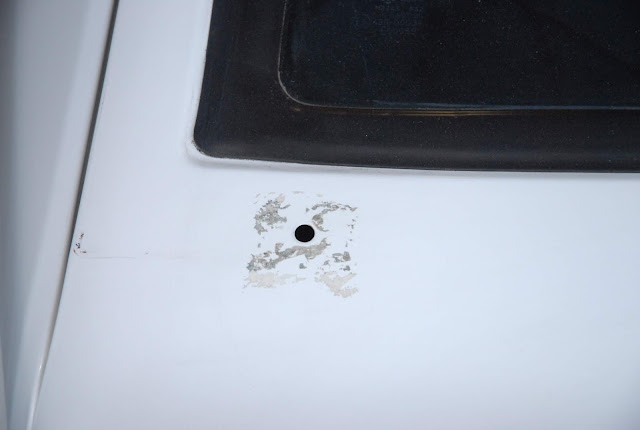 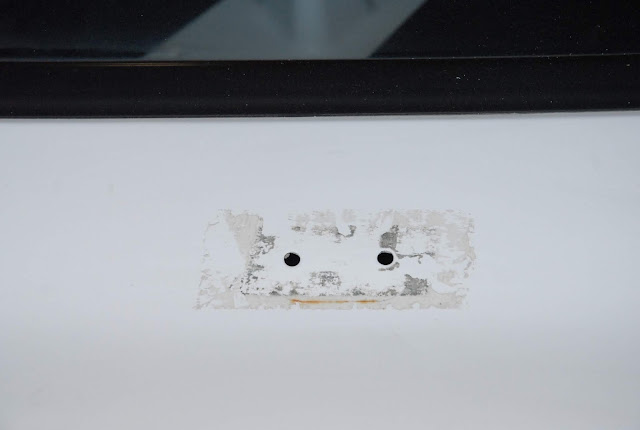 I masked off the surrounding area with two layers of blue tape (it's only staying on the car a couple of hours this time), and started sanding away. 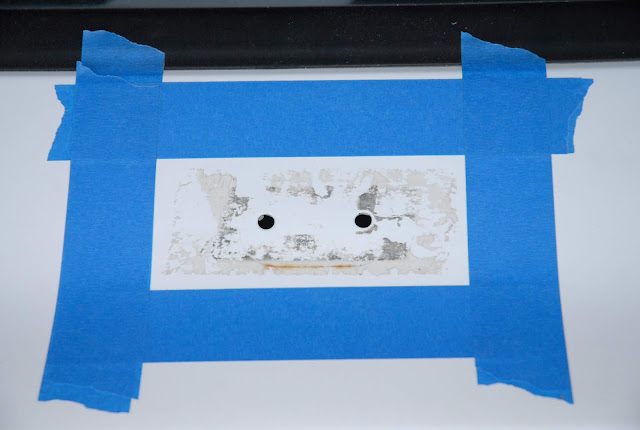 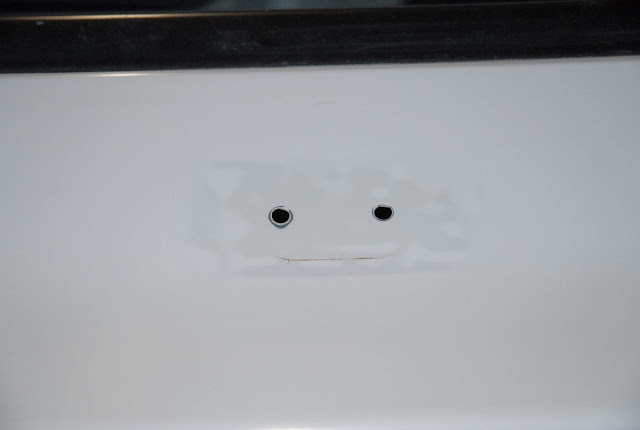 The darker areas are caused by the paint being very thin there, and the grey primer is just starting to show. Total time to sand out this approx 3" x 2" area was 90 minutes. The "rings" around the bolt holes are bare steel, soon to be primed, and the thin line beneath the holes is a rust line, caused by the triangular gasket on the spoiler chewing down  through the paint after it degraded and became very hard.

Even though the spoiler covers the hatch, it 'floats' over the hatch at the bottom, being attached at the outer corners and center. With the spoiler on the car, you'd still be able to see the glop because the gasket doesn't cover it all. 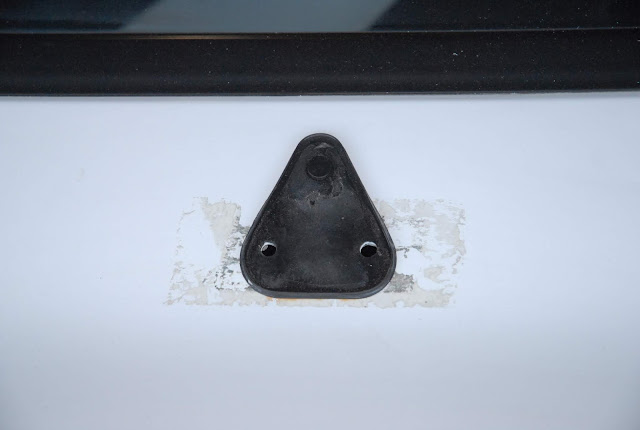 If I knew back then what I know now, I never would have used tape. I would have have punched out some small discs of the aluminum foil tape, and stuck them over just the holes. Due to my own ineptitude, I now have some paint work to do, not something I enjoy.

Oh, and as I was finishing up, I noticed this: 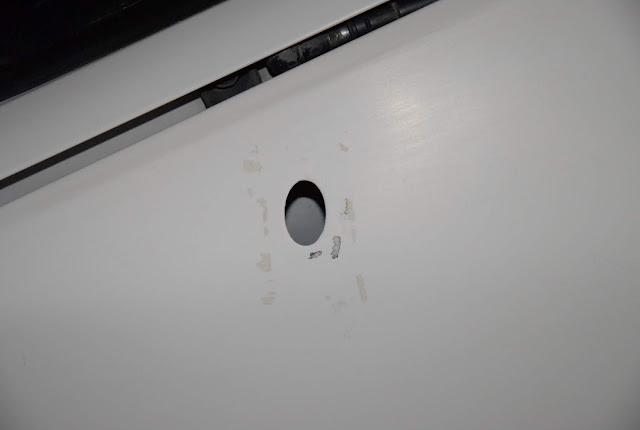 That's the mounting point in the right rear quarter for the power antenna, and the site of my original Paint and Bodywork Experiments. The rubber parts for the antenna got hard and brittle (notice a pattern here?) and chewed through the paint, leaving bare metal, which rusted. So, several years ago I pulled the old antenna, and "fixed" the paint in that spot. This was when I first saw how thin the paint was, and wound up spotting in an area about TEN times as big as the damage. Every time I'd try to feather in the new repair, I'd blow through the original paint, and have to make the repair area bigger.

And yes, I masked off that area and sanded it out before I closed up for the night. 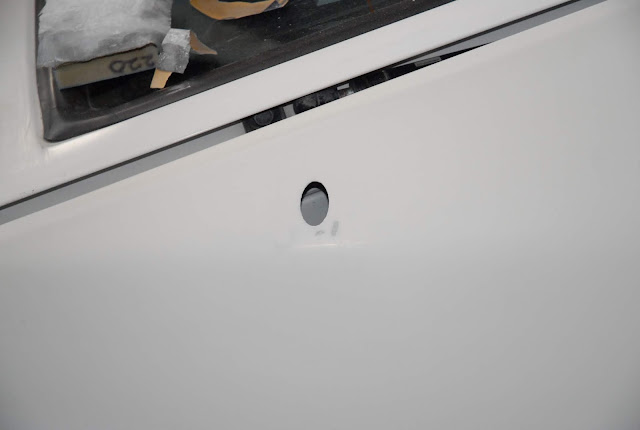 And I still have to address this mess at the top edge of the hatch, and rear edge of the jamb area. 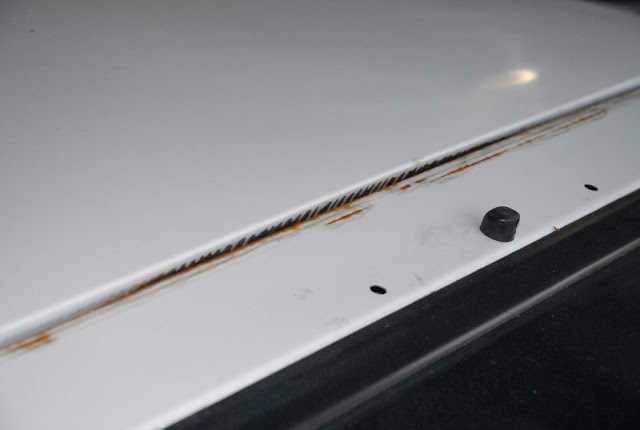 The rust on the edge of the hatch was caused by the spoiler/gasket issues, but the back of the roof where it goes into the jamb area? Real live, genuine "Factory Installed Rust"! It never got painted at the factory in Japan. You can see where the paint on the roof flowed over the edge and dripped down, but the vertical section of the jamb either never had any paint on it, or was painted so thinly that water went through the paint and primer, and got at the steel.

Rust proofing on 1980's Japanese cars was NOT very good, and one of the British car magazines had an article on how fast these cars "dissolved" over in the UK.
at June 10, 2018