So our young handyman guy and his Dad (cool old dude!) came by today with the rest of the shredded cedar "mulch", and finished off the bare spots, and made sure the area had about 3" of mulch everywhere.

Looks much nicer than when we moved in. Sorry for the poor lighting, but I think you get the idea. 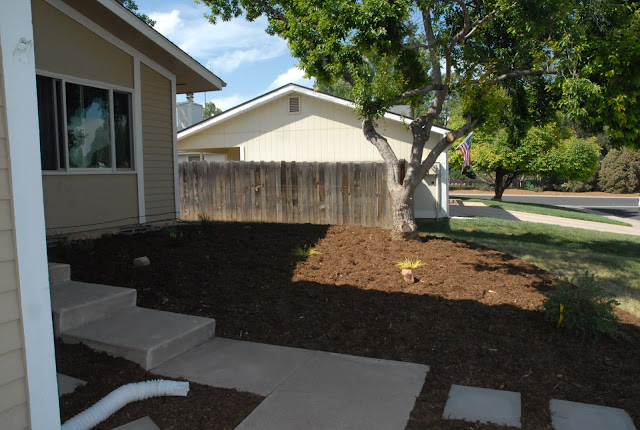 The little walkway makes street access easier. Yes, I know it's not a good idea to make it too easy for the goblins to get in, but we have some, uhh....., "Security Measures" in place besides Pebbles The Wonder Dog, who I would NOT want to deal with at 0300 unless my scent was in her memory bank "Top Ten Good Guys" category.

Maybe make that the "Top Five"?? 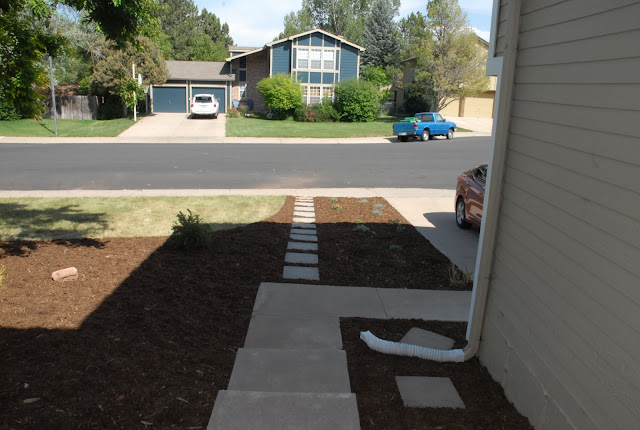 Looks a bit barren, but the plants we picked are fast growing, and only get "so big", according to the House Botanist, my sweet little wife. The nursery we like had these in something like four sizes of pots, so she went by $$ for the final choice, and I think these are the "$10 size" plants. In the above picture you'll see a little "bush" to the left, and that's the size plant she wanted.

That's the "$40 size", and was a birthday/Mother's Day gift from her son. We were blown away when he took it out of his car and gave it to us! Forty bucks is a lot to The Kids, and we certainly didn't expect it.

Anyway....these little guys seemed to have survived the transition from pot to front yard, and seem to be happy. 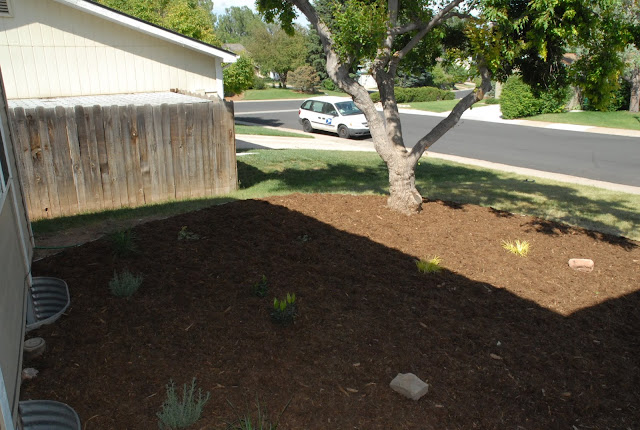 And we still have to decide what to do on the North side of the house, besides turning the fence panel into a sturdy gate. And I'm going to emphasize "sturdy", because those 60+ MPH winds we had twice this last Spring really caught me by surprise. My neighbor had several fence panels come loose from the posts and blow down. In one case, it pulled loose from one post, and snapped the other one off at ground level, That post was rotted out, along with two on our shared fence, so I helped him dig the old ones out and set the new ones in. It's also why the antenna/tower project is on hold. I really need to seriously talk to some people with local experience with towers and Big HF Yagi antennas here. I should probably noodle up a separate post on the Tower Project. I know some of you guys have experience with towers in places with Real Weather, compared to the benign "weather" I've lived with for the past 35 years.

In the meantime I've clobbered both front and back with a double-dose of "Season Long" broadleaf weed killer. It has good old 2,4-D in it, which I distinctly remember in the "Ortho" cans in Dad's garage when I was growing up. Dad hated dandelions with a passion! Besides the "Weed-and-Feed" treatments he gave the lawn, he had a green plastic tube called a "Killer Kane" that you'd put some big tablets in, and fill up with water, The tablets fizzed and dissolved, and you put the cap on. The business end of it had a spring-loaded nozzle, and when you pushed the Killer Kane down on the dandelion, it got a shot of whatever herbicide tablets you were using. 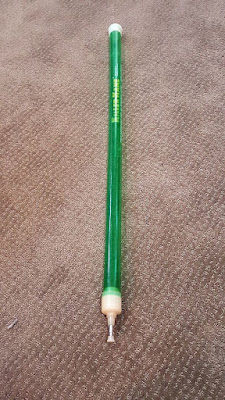 I always thought the Killer Kane was Kool!

For now we've got the back yard in maintenance mode, just keeping it watered, fed, weeded, and mowed. And as soon as our "Original Lawn Guy" refunds the money he's holding from the canceled contract(s), we'll be getting in touch with Chainsaw Mama to work her magic on the cottonwood trunk. After looking at it for almost eight months, we think we "see" various critters in it, and we'll be interested to get her take on it.
at June 15, 2018