So, I had the chair apart to replace the "Rocker Bearing Assembly" after I figured out I wouldn't be able to repair the OEM assembly. It was riveted together, and some of the parts were munched up, and while it could have been rebuilt, it would have been a major undertaking.

So, Googling around found multiple choices for new assemblies. Prices ranged from $30, free shipping, for something from the WongBongBing Chair Bearing Company all the way up to a $700 all stainless steel unit made for deep sea fishing chairs.

I settled on this one for $55 shipped. 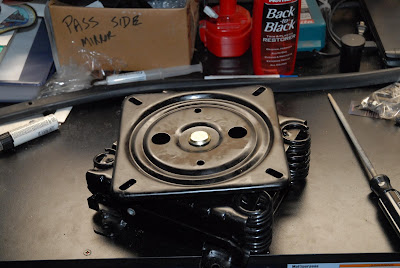 It had the correct dimensions side-to-side, but the fore-and-aft mounting holes were about 3/16" too close together.

45 minutes with a round file, and the holes were elongated enough to slip over the other two mounting studs. 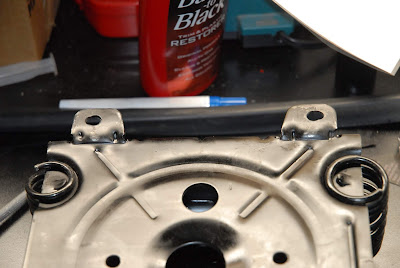 So after what our British cousins would call "fettling a while", the new assembly fit nicely over the four OEM mounting studs, and was properly secured with new flat and split-lock washers.

The clamp and 'load spreader' board are holding the middle piece of bamboo trim down while the glue sets. This is where I left off the other night. 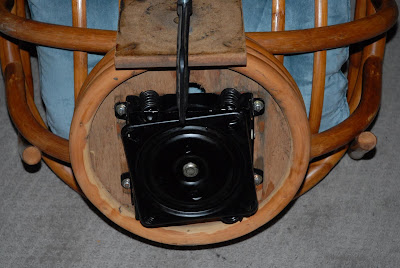 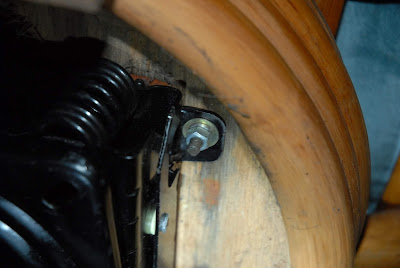 My wife was helping me, and I got too involved explaining what I was doing to take pictures of how I put the base back on to the new rocker bearing, so I'll get all wordy on you....

The thin plate with long, slotted holes in the top picture bolts to the round base of the chair using 1/4-20x4" carriage bolts. Between the thin plate (which is the other mounting flange for the bearing) and the small round base is a "reinforcing plate" made of 1/2" high-density particle board. The long carriage bolts pass through this, through the plywood of the base, and are secured with 1/4-20 nuts, and "too small" flat washers that dug into the wood.

The problem is that after you install the bolts and slide on the reinforcing plate, you need to hold the top of the carriage bolts in place while you line up the bolts with the four holes in the base, and slide the base on to the looong, wobbly carriage bolts.

Only you can't get your hand in there....there's no clearance. So I taped the bolts in place with a couple of layers of blue painter's tape, hoping the adhesive would be strong enough to hold the bolts.

It almost worked. The first time I was able to get all four studs aligned and started into the base, and actually got two of the nuts on. The other two studs were flush with the base, but I just couldn't get even one thread through.

Hmmmmm........just how tight are the holes in the base? Sure enough, when I took the base out to the garage, a 1/4" drill bit dug in like a screw thread, and pulled the drill though. After making several passes from both sides, the drill bit went easily through the holes, and back in the house we went.

After a bit more "fettling" (hey...I like that word!), the base slipped on to the bolts, the washers were placed, and the nuts tightened down. 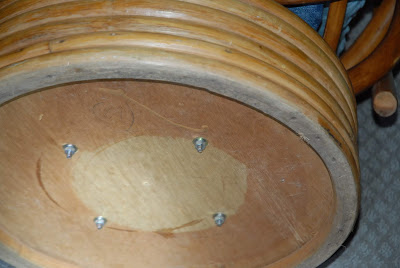 It rotates and rocks very smoothly now, and we saved this old guy from the landfill. 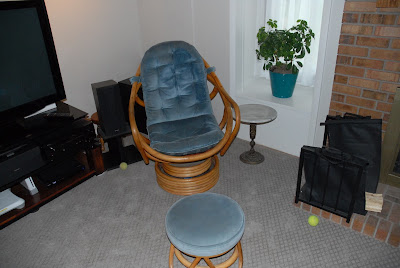