Geez...I used to be soooo good at this stuff.

Anyway......The replacement wireless adapter is running rock-solid, the weewx software is pretty much configured the way I want after going through a few oopsies, and I cleared up a communications issue between the little PC running the software, and the Davis Instruments console. Turns out the "Archive Interval" has to be the same in the software and the console, or you get gaps in the plots that make them look pretty strange.

And after running it for a few days testing, tuning, and tweaking (the software, not me) it, I enabled the section in the "wwewx.conf" file to send the data to the Weather Underground website. I used to send it to the Citizen Weather Observer Program (CWOP), but that's when I had the station connected to the APRS network back in Long Beach. Since I'm "antenna poor" here, I'll just send it to the Interwebz for now. I can always enable the section that sends the data to the CWOP, but I'll probably have to set up a new account, as my callsign and location have changed from when I last had a wx station online.

Since I'd really like to get the console for the weather station back up here so it's viewable without running down to the basement, I'll have to clear an area near the wife's PC to set things up. 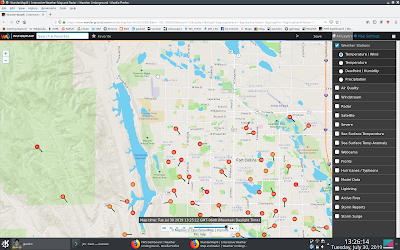