And man, was she dirty. I used the pressure washer with just water to wet her down first, then switched in the tank of Turtle Wax Max soap, and soaped her up good.

So after scrubbing her with a big wash mitt, and a good rinse, she almost shines again! 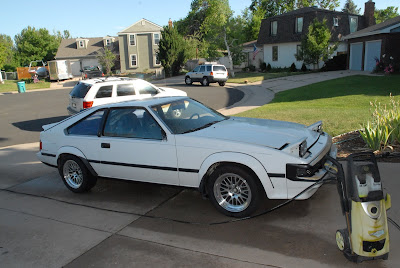 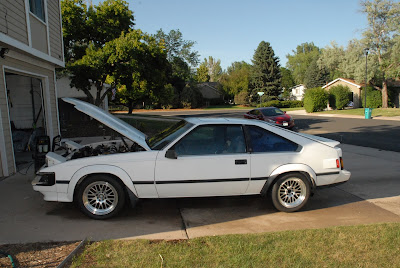 However, before those festivities began, I pressure washed the engine bay. I'd applied a full can of Gunk to all the problem areas the night before, and another can right before I backed her out. And since the pressure washer has two tanks, I had the #2 tank for of some degreaser/cleaner, and switched to that before I blew all the Gunk, Grime, and Grunge off the engine. 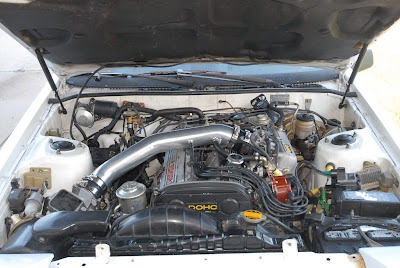 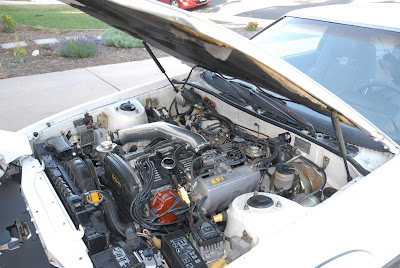 It still needs a bunch of hand detailing in there, but at least all the crud I missed the first time is gone, which will make it much easier to do the planned mechanical work.

Next project is to remove each fuse, clean the contacts with DeoxIT!, and put the fuses back with a dab of silicone dielectric grease, something I've been doing to every connector pair I've had apart. Should probably do it to all the connectors, but these are high-quality, O-Ringed connectors, and every pair I've separated has been very clean inside. Anyway, this is brought on by the fact that when I started her yesterday, the voltmeter indicated 12.8 Volts, rather than the 14.1 Volts considered 'normal'. I figured great, the alternator went AWOL over the winter, but today it was indicating 13.8 Volts, and would go to 14.1 with some revs, so that kinda points to a connection problem that "cured" itself with a bit of vibration and/or thermal cycling. I was planning on replacing the alternator with an upgraded one from a 1992 Camry V6 that has 100 Amps output compared to the 60 Amps of the OEM unit. They're about $50 more than the OEM alternator, and are 100% compatible with the car. These cars all have a trait of weak alternators that dim the headlights at idle, and this cures the problem, and provides plenty of extra current for the electric fan(s) I want to install so I can delete the engine-driven fan and free up a few HP.

And cleaning up the garage yesterday really helped with locating stuff that was misplaced. I found several boxes of things I was going bonkers trying to find, and they turned up buried under some stuff on the totally wrong shelf from where they should have been. When I shelved all the "Garage Items", I wasn't too careful where I put stuff, and it bit me.