Another "45 Minute" Job Takes How Long?

Almost three hours, and it was a comedy of errors.....

When I mounted the box and drilled the holes through the wall the other day, I used a 'minimum size' hole. And seeing as the holes on the two boxes aren't perfectly aligned, their effective size is lessened. The first time I tried to push the bales through the wall was no joy. The cables never made it to the other hole, and wound up coiled inside the wall.

I grabbed my drill and a 1/2" paddle bit, and bored out the holes. Then I used a length of #10 wire from my scrap box as a fish tape, pushed it through the wall, taped the coax to it on the outside, and pulled them both through the wall. Between going back and forth to the garage to get stuff, and shepherding the still lame dog in and out (she's much better with meds), this simple little job took waaay longet than it should have. 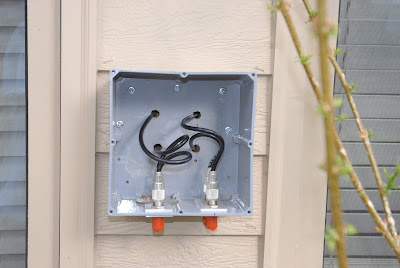 Connectors were given a squirt of silicone dielectric grease, and torqued down snugly. A drop of green "penetrating" LocTite was applied to keep them snug through the temperature fluctuations they'll see. I'm going to cut up some styrofoam to fill the box with for insulation, one of the main reasons I wanted to keep the through holes as small as possible. Probably should have drilled one big hole dead center in the box, but oh, well....20-20 hindsight. The loops in the cable are for stress relief.

And on the inside: 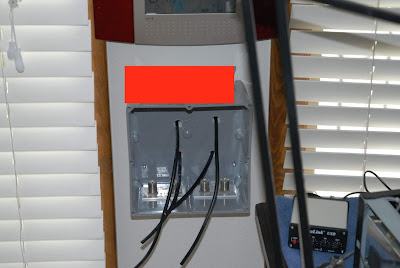 Yeah, three hours futzing around to get this far, and I still have to install the connectors on the cables.

At least they're adequately long. I would have been pretty upset if they were an inch too short.....
Posted by drjim at 10:32 PM