Didn't get much done on the car yesterday. I was on the Battleship Iowa from 1230 to 1715 helping guide a tour from a local radio club down into "The Bowels of the Ship".

Well....not all the way down, but two decks below what most people get to see, where the Transmitter Room is located.


I did make some good progress today, though. I now have the sway bar end links installed, the new bellows boot for the right side of the steering gear replaced, and both hoses for the power steering off the car. I needed to replace the high-pressure hose as the place I originally took it to for smog said the hose was "Leaking fluid and spraying it EVERYWHERE!", and refused to work on it citing safety concerns. I could never find evidence of it leaking any more than a very small amount of fluid, and suspect they really don't want to work on 30+ year old Japanese cars. Oh well....

I pulled both the pressure and return hoses as an "assembly" because they're held together by clamps every 6~12", and by removing two small bolts, they came out as one piece once I had the fluid connections disconnected.

I found it MUCH easier to replace the hoses (if you're going to do one, you should probably do BOTH...) if I did the following:

1) Remove the air cleaner assembly. This gives much better access to the low pressure return hoses going to/from the loop of tubing Toyota laughingly calls a "cooler". It's better than nothing, and I do plan on replacing it with a real cooler. I had a cooler from a Cadillac on my 1973 Trans Am, and it made a noticeable difference in how the steering felt on hot days when I was autocrossing the car.

2) Slurp out as much power steering fluid as possible from the reservoir, unless you like a waterfall of fluid going everywhere as you're laying on your back under the car when you pull the hoses from the rack. -OR- you can plug the outlet of the pump as soon as you pull the high pressure line. Keep in mind the lines themselves are still full of fluid, but at least you won't have the entire reservoir take a dump on you!

3) Disconnect as much as possible from the top first. Pull the flare nut fitting from the pump, and pull the hose going to the cooling loop.

4) Remove the two 10mm bolts holding the clamps to the steering rack. These clamps holds the supply and return hoses together. Wipe the area down before starting to remove the bolts, as you won't get as filthy actually pulling the parts out.

5) Disconnect the flare fittings at the rack, making sure you have a drip pan, and/or plenty of paper towels (see #2 above!). Undoing the return line first will allow you much better access to the high pressure line.

6) Pull both hoses together as an "assembly". This will allow you to look at them out on the ground so you get a better idea of how to install the new ones, and give you a chance to easily clean off all glop that's covering all the various bits and pieces. Mine seemed to come out easiest from the bottom, but YMMV!

7) Put your new hoses together using the old clamps, and route them the same way as the old, dirty, filthy rotten ones were. Tape up the ends of the new hoses to keep crud out of them!

8) Install your new, clean hoses as an "assembly". Fill the reservoir with Dexron or equivalent, and bleed the air per the TSM.

If you try and do them one-at-a-time, you'll be pushing, pulling, and fighting the old hoses out, and the new ones in, and using more than a few choice words. I spent probably way more time than I should have looking at how these were installed in the car, what held them down, how they were held together, and what had to be removed to do this the easiest way I could.

Face it, I'm "lazy", and I'd rather spend some time figuring out the "easy way" (as long as it's also "correct") to do something before I start on it, rather than have a D'OH! moment half-way through the job where I see a better way of doing something.

There's NOTHING in the TSM about removing/installing the hoses other than the cryptic "Remove the high-pressure hose", and "Remove the return hose".

When I saw how they were clamped together, and the clamps not only held them together, but held them in place, I figured it was easiest to just call them an "assembly", and pull them out together. 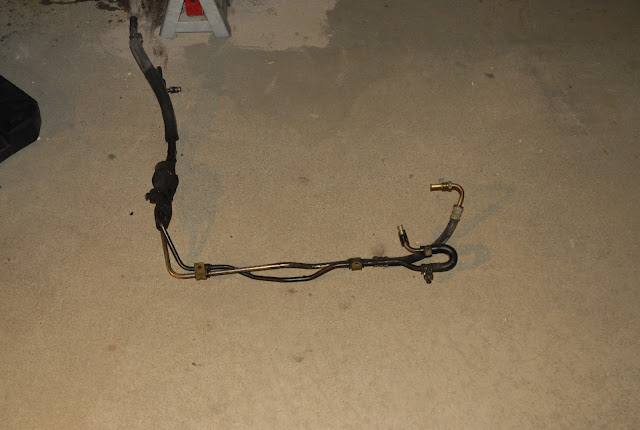 The connections on the right side go to the steering gear: 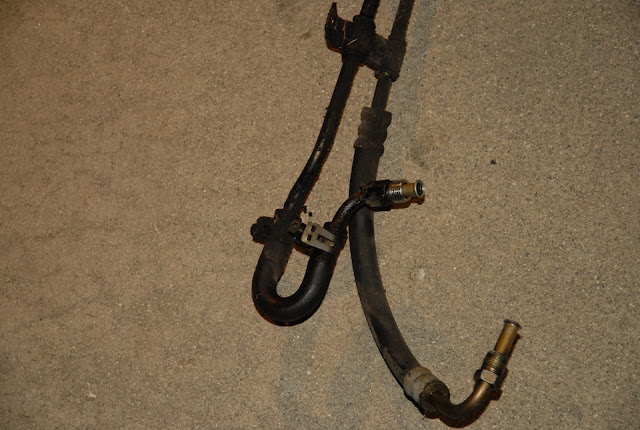 and those at the upper left go to the pump, and fluid cooler: 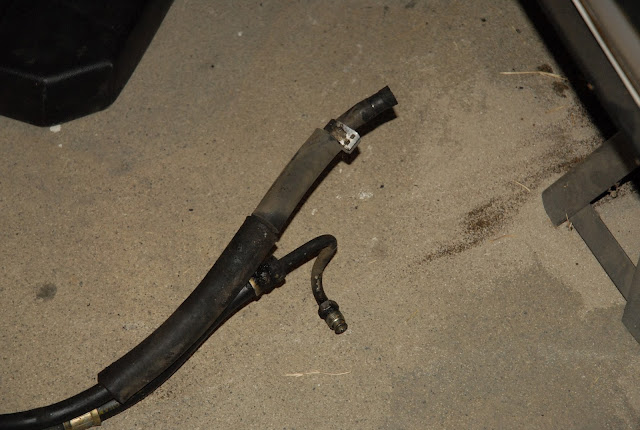 Monday I'll scrub all the glop off the hardware, assemble the new hoses, and put it all back together. Then it's down to putting the wheels and tires back on, dropping it to the ground, and doing the final torquing of the suspension bolts, which requires the weight of the car to be on the suspension.

Then it's on to the rear, where my friends who've done this before assure me that even at my snail's pace work speed, I can swap out the springs and shocks in about 4~6 hours.

Then to the alignment shop, and a week of "shakedown" cruising to make sure it all works right!