Back On The Ground


WELL.....after a several week adventure, the suspension work is finally finished. I still have a few things I want to do, and some more parts to replace, but nothing that's on the "Do It NOW!" list like replacing the top strut mounts was.

And since I had to pull the struts and compress the spring to get the Big Nut on the top of the shock absorber insert off so I could change the strut mount, why not just replace the shock insert and springs with the parts I have on hand?

And since the hub and brake disc had to come off, better check and repack those wheel bearings! Whoops...the bearings show definite signs of wear (they're probably the 167,000 mile OEM bearings) better replace those, too. AND, since I have new brake discs, and the old ones are already off, why put the old ones back on?

Gee...the ball joint boot on the lower control arm is split and spilling grease all over the place. Better replace the boots. AND, since the control arm is now on the bench, why don't I just replace those ratty old bushings with my new Energy Suspension polyurethane ones?

AND...gee, the sway bar is disconnected, and those rubber bushings are (quite literally!) cracked, split, and falling apart, so I'd better install that new kit of end links I have in The Big Box Of Supra Parts.

WHOOPS! The front brake hoses are cracked, and the outer jacket is (really!) peeled off in a few spots! WoW! That's a Safety Issue. Sure glad I bought some braided stainless steel replacements a year ago!  Installing the speed bleeders took all of 10 minutes, so I won't discuss that further, other than to say I was absolutely stunned that all four of the OEM bleed screws came out with ZERO drama.

Otherwise I just would have sprung for new calipers.....

I think you get the picture.

If you've been following this escapade, then you already know that I (finally) got the front finished a couple of days ago. And yesterday I completed the right rear refurb, with relatively little pain.

The plan for the rear was never as ambitious as the front was. It was pretty mach always a straight "Spring and Shock Swap", along with the new rotors. Since I had no idea what shape the brakes were in when I bought the car, I ordered the new pads and rotors TWO YEARS ago, and they've been sitting in the garage taking up space all this time.

Today I knocked out the left side rear suspension, having learned a few things in doing the right side. A small bottle jack I bought last night at O'Reilly Auto Parts (they know me by name now, and the young guys always ask how the car is coming along) proved to be well worth the $25 it cost. It saved me at least an hour of farting around with the floor jack, some big wood blocks, and a jack stand when I had to reposition certain things to R&R them.

Here's the left rear, all refurbed and pretty: 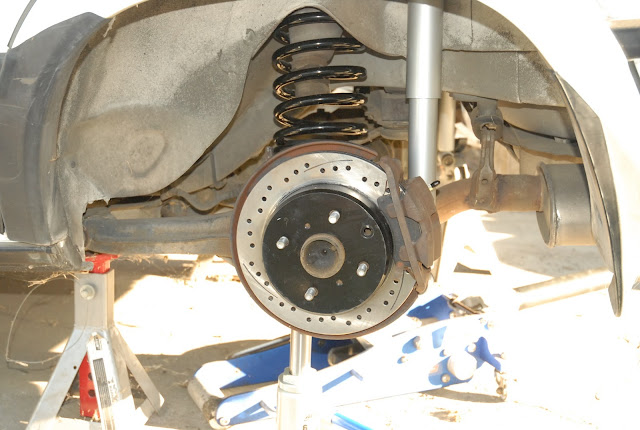 Yep, new cross-drilled rotors there, too! Hey, why buy two rotors when for twice the price you can get FOUR?


And as the sun sank slowly in the West, all four (new!) wheels and tires were on the car, torqued, and ready to support the car, whereupon I unceremoniously pulled the jack stands, and let her drop 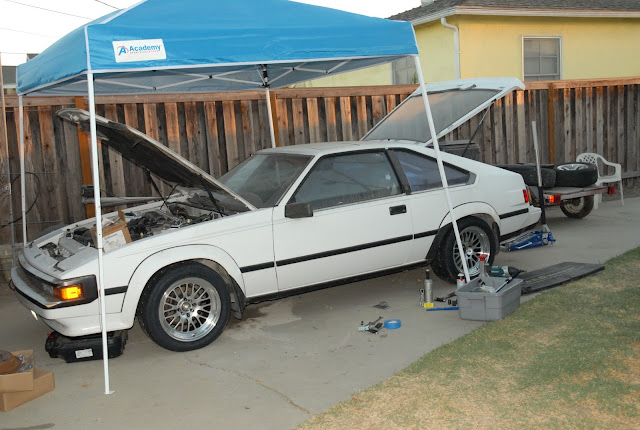 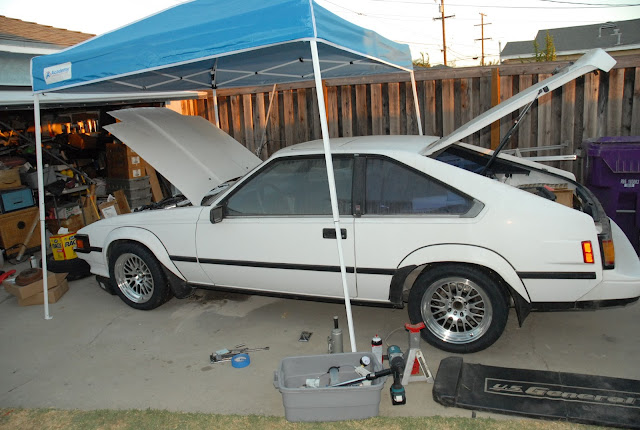 SO...Thursday should be an "easy" day, compared to what the last 6 weeks or so has been. I (just) have to torque the lower control arm bolts (one on each side, 80ft-lbs, please), and torque the Big Nut on the left and right strut rods to 76 ft-lbs.

Then it's cross my fingers, and take her for an easy drive around the block. Then I'll recheck the torque on the wheel lugs, check everything else I've fiddled with to make sure nothing bad has happened, and call the alignment shop for an ASAP appointment. I'd really like to get at least some of the interior back in, along with the new stereo, but the carpet can wait, as my friend I met at Supras In Vegas last year tells me to allow a good, solid week-end to install the new carpet.

That means a month, considering how dog-slow I work on this stuff.