Today I split a bunch! Since we have rain coming for the next week or so, I split up a bunch of the ash, which was bone dry, and lugged it into the house. I also levered the two remaining logs out of the yard, and on to the gravel beds, and I'll saw those up after the weather settles down. The ash should make for some nice fireplace wood for the upcoming cold, damp days.

By the time I finished, TLG was up from his nap, so we built a fort in the den. He's in there somewhere. After the flash went off he started laughing that I'd "Never Breech This Fort!". I have no idea where he learned that. He's been coming up with some amazing stuff for a 4-year old. 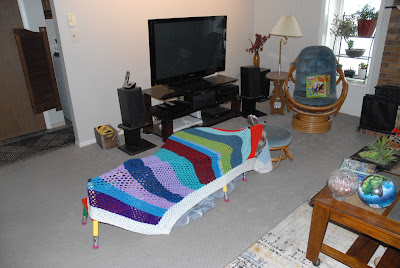 And since he's big time into Legos now, we built him a Lego Table. Lego wants like $80 for theirs, and SLW thought that a bit much. She found a nice little table and chair at nextdoor.com for $10, and then ordered $10 worth of self-adhesive "tiles" with the correct pins on them to snap Legos to. They arrived shrink-wrapped too tight, and were more bowl-shaped than flat. Hmm.....What to do? I took two pieces of the ceramic floor tile the previous owners left, and my heat gun, and put the Lego tile on one piece, heated it up for 60 seconds to soften it, and placed another piece of heavy ceramic tile on it until it cooled. Presto! Flat Lego tiles.

So for twenty bucks, he now has a nice Lego table. 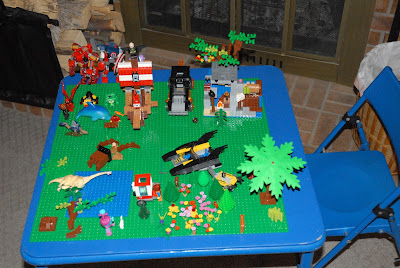 And yes, he helped build it!