One of the things I've been kicking around doing is setting up another small PC to run a couple of programs on so I can "watch" what air traffic is around us. The easiest way to do this is to monitor the ADS-B transmissions from the aircraft using a receiver and a PC to decode the transmissions, and then display them on a map.

For the receiver I'm using one of the ubiquitous "RTL Dongle" receivers and a vertical whip antenna, unceremoniously hung on the wall using the pull cord for the blinds. 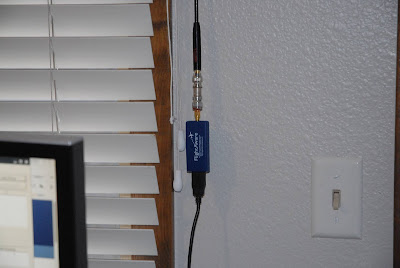 This particular receiver has been optimized to receive the 1090MHz transmissions, as it has a bandpass filter and preamplifier tuned for 1090MHz.

Yeah, it's a kluge right now, with an inappropriate antenna, and a mess of adapters, but it's working better than I thought it would. Plans are in the works to build a proper antenna for it, but for now it's grabbing and decoding signals like crazy.

The main program is one called "dump1090", and it spits out all the data to a terminal window. 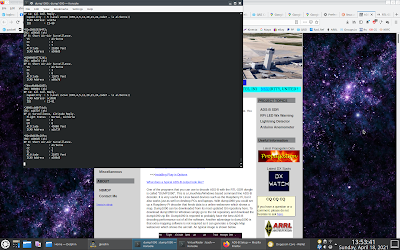 dump1090 also includes a lightweight webserver, so as soon as I can sort out some port assignment issues, I should be able to have this on the Web. Then I'll set up one of the small "bookshelf" PC's I have to run the programs, and make the data available to others.

After I get this working, I'd like to also build something to receive the ACARS transmissions. And then build a 137MHz Lindenblad antenna to receiver the APT satellites again. I tossed the "Eggbeater" antenna I was using for that back in Long Beach, and I'm still kicking myself.....