Spring In The Rockies A.K.A. Here It Comes Again!

We've had some flurries the last couple of days, but this is the first time any of it has stuck around.

So far, we've got several inches, some of which melted as it was coming down earlier. 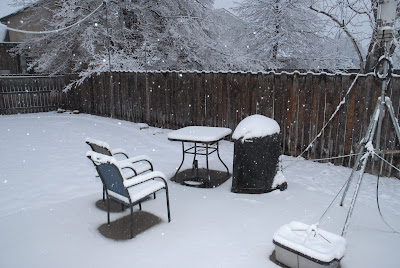 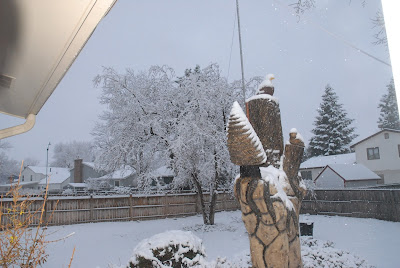 And there's 3~5" more forecast for overnight, with lows in the mid 20's. Gonna be a mess for the Friday morning commute. Lots of scanner traffic on the Larimer and Weld County road crew frequencies, mostly where they were de-icing. Bunch of calls for tow trucks, too, with one pick-up truck being "Several Hundred Yards Off The Highway". That's gonna be an expensive tow!

And SLW has declared to water heater to need replacement as a preemptive strike. I put a new thermostat in it last year, as it kept tripping the "Overheat" switch, which shut it down. I was going to replace both heaters, too, BUT (always one of them) I couldn't drain the tank. The drain valve turned easily, but after an initial trickle of water, it stopped draining. This heater was installed on 12-23-08 per the installation tag, so it's pushing 14 years. It's probably full of sediment blocking the valve, as the water here is pretty hard. It makes plenty of hot water for my showers, but SLW enjoys a good, HOT soak, and has complained since we bought the house that she can't get a full tub of HOT water.

The heater is down in the back of a closet in the basement: 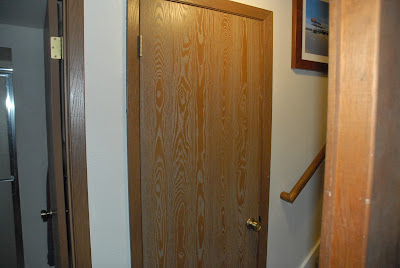 WAY in the back: 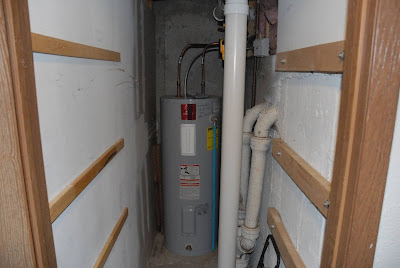 The big white pipe running vertically in the foreground is part of the "Radon Mitigation System" the house has installed in it. I was thinking of various ways to drain the thing, short of drilling a hole in it, and my inner Engineer told me to:

1) Shut off breaker and water supply

4) Connect an air compressor to the fitting and apply air pressure to blow the tank empty via the open hot water faucet in the next room.

And they probably know a way to do it that takes five minutes......!