Some Pix of the Batlleship Iowa Comm Center

No, it's not anything like the movies (That's usually the CIC, Or Combat Information Center), and it's really pretty stark. Even up to 1990, when the Iowa was put into the mothball fleet at Suisun Bay for the last time, things were pretty simple. Most of the routine message traffic was handled by Radioteletype, but voice traffic could be routed throughout the ship by the various switchboards located in the Comm Center.

Since ALL message traffic went through this room, it was highly secure, and unless you were the Captain, you'd better have a damn good reason to be in there if you weren't on-duty!

This room had the teletype terminals, a couple of newer CRT-based Data Terminals, all the receivers and teletype demodulators ("Terminal Units"), some test equipment, the patch bays and switchboards, and the "Coke Machine", a large rack painted red that handled secure voice routing.

I'm somewhat familiar with most of the equipment, but don't have a clue (yet!) as to how the switch gear and patch bays tied everything together, although I have a general idea of how it should work.

The transmitters are located down on the third deck, and I haven't made it down there. It's a 'restricted area', mostly due to the fact that few people are down there to help you if Something Bad happened, and to go down there requires you to use the Buddy System, take a walkie talkie, carry a flashlight, and have permission from the Security Department. I'll get down there one of these days, as well as to the area where all our coaxial cables terminate as I have a "Need To Know" how we tie our Amateur Radio equipment into the ship's antenna system. And since I found the antenna cables mislabeled, I think I'll have to walk the entire cable path to see if something got reconnected improperly between when the new Amateur Radio cables were run, and when we started using them.

This is what first greets you as you come in through the starboard hatch: 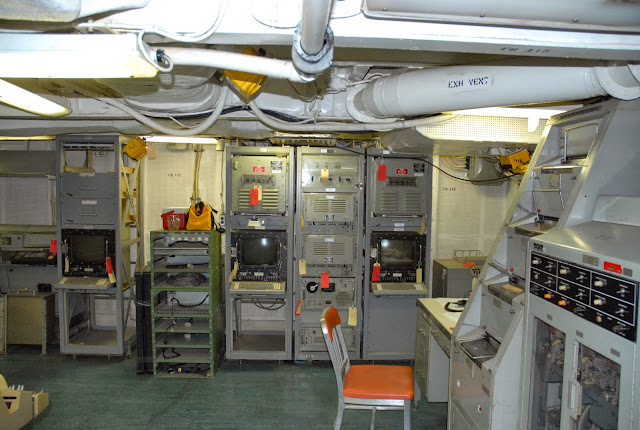 Dead Ahead are the newer CRT-based Data Terminals, along with their storage units and interfaces. To your right are the "Reperferators" used for making a local copy of received RTTY traffic.

Over to the left are some teletype units: 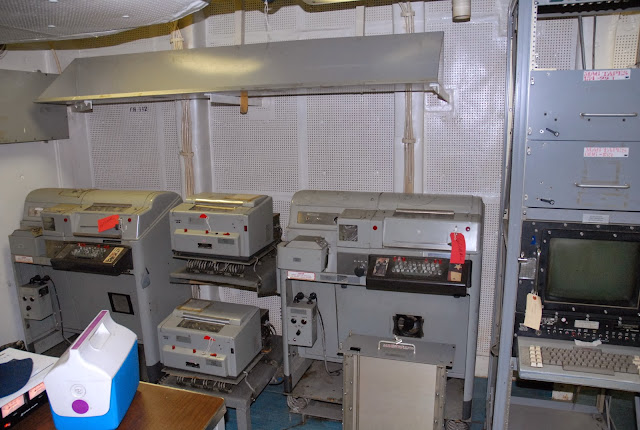 The Igloo cooler on the desk, and the Astron power supply, are for the radio gear I was using for the event.

And here's my Elecraft and operating position: 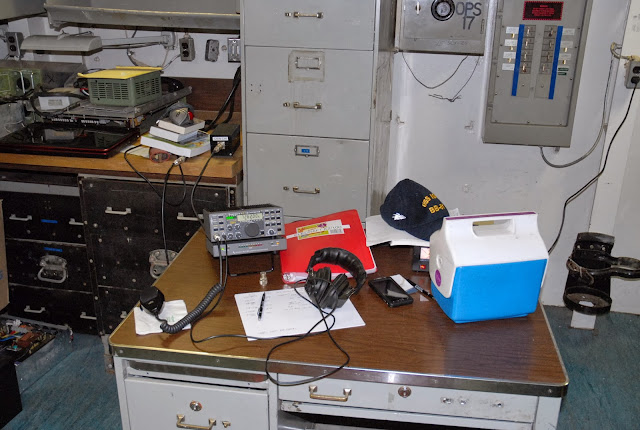 With three stations on-the-air simultaneously, the headphones were a must!

This is part of the area aft of the main room where the receivers are located. Some of the receivers are Collins Radio, some are Racal, and some are made by other companies. They're all the same type, and are functionally identical, just made by different manufacturers: 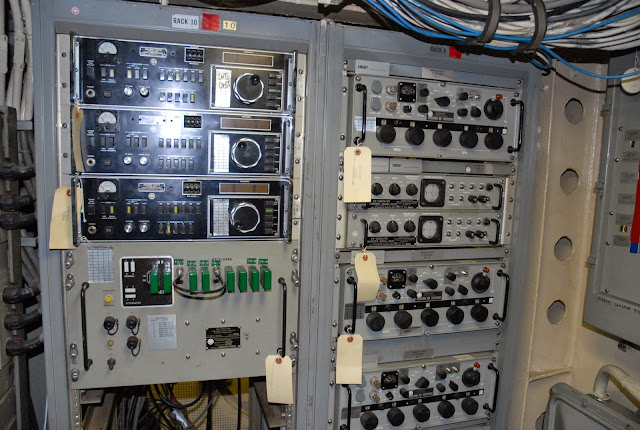 There are two RTTY Tuning Units located in the right hand rack, under the first receiver, located at the top of the rack. These are used to tune the receiver correctly so the RTTY demodulator can decode the signal.

Here's a more head-on view of the rack: 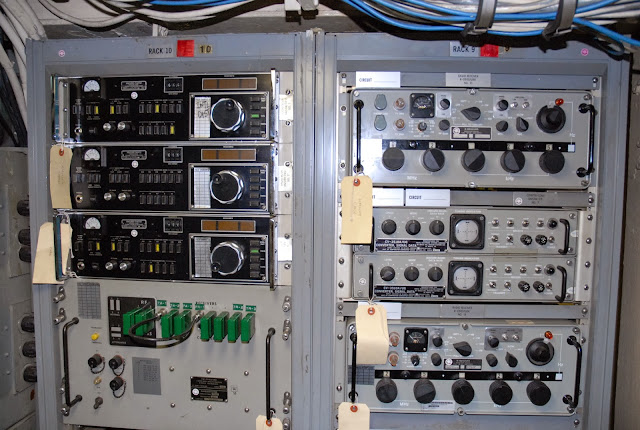 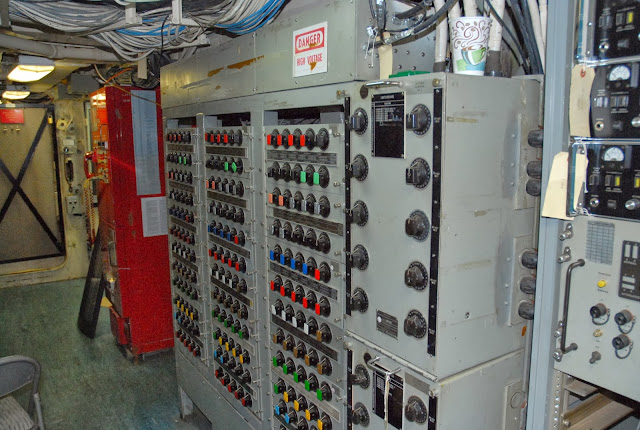 The doorway that looks like a large "X" is the entrance to the Server Room that runs all the commercial enterprise stuff that helps keep the Iowa going. Sometime back we had a fuse blow that powered up some of the outlets in the room, and boy did we scramble to get the portable air conditioners back online! It was a very hot day, and the room temp hit 97* before we located the blown fuse, and got the cooling units back online. If the servers would have gone down, the ticketing people would have had to turn visitors away, as one of the servers runs the ticketing services.

This is the "Coke Machine". I'm not sure exactly what it does, but from looking at the buttons and placards on the side, I think it routes secure voice comms around the ship. No need to worry about sensitive equipment falling into hostile hands, as ALL the crypto gear was removed from the ship! 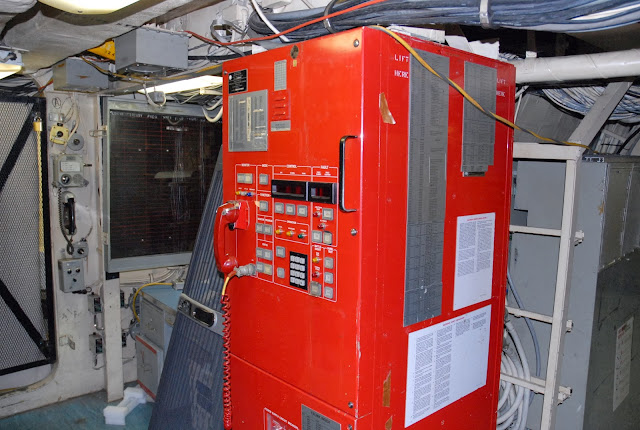 This is the other side of the room, to your back of the first receiver racks. These racks hold more receivers, the preselectors for each receiver, and some audio patch bays for manually patching the receiver audio to various places: 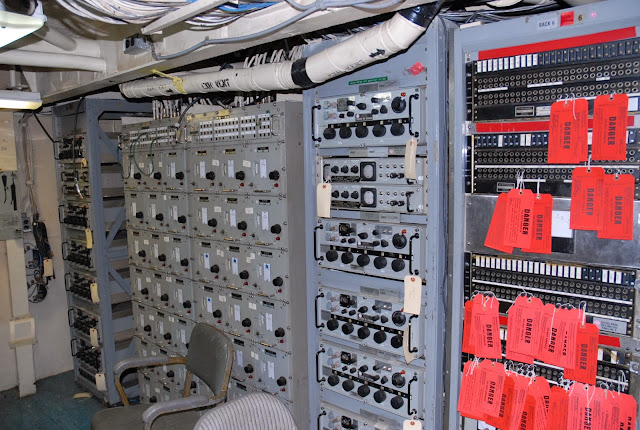 I haven't actually read what's written on the "DANGER" tags, but I think it's more of a warning not to tamper with the way things are currently patched (the ship's intercom works, and is in use) rather than any actual danger, like if the voltages involved here were very high.

This is a test equipment rack to the right of the racks you just saw. The far right side of this rack has more RTTY stuff, but I'm afraid to admit that I've forgotten exactly what those boxes do, even though I used to know! It's been soooo long since I did any RTTY operations that I've forgotten a lot of things! 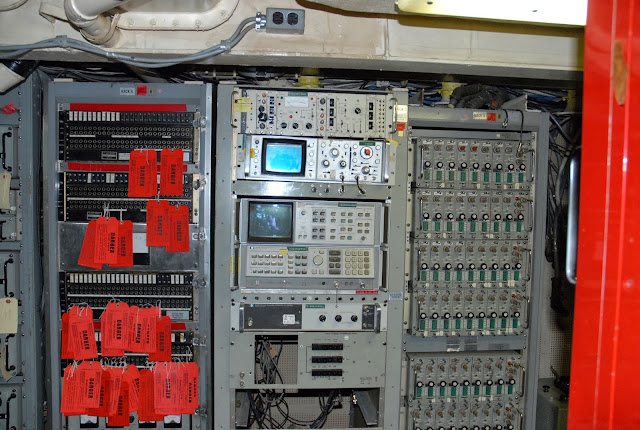 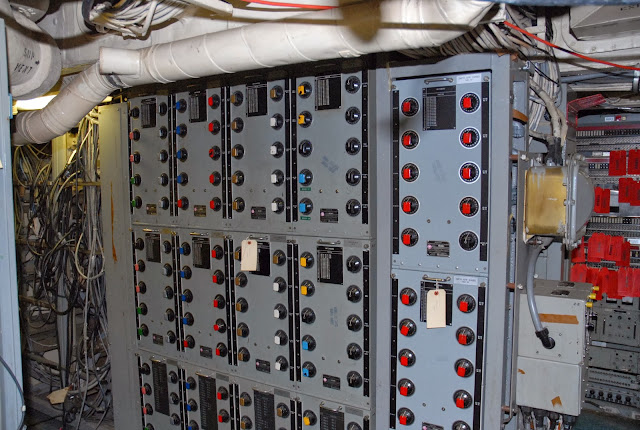 And back out into the main Comm Center. This rack holds more teleprinters, more reperferators, and some "BITE", or "Built In Test Equipment" to monitor the operation of the gear. To the left, on the desk, you can see the Kenwood TS-850 used as the #2 station during the event: 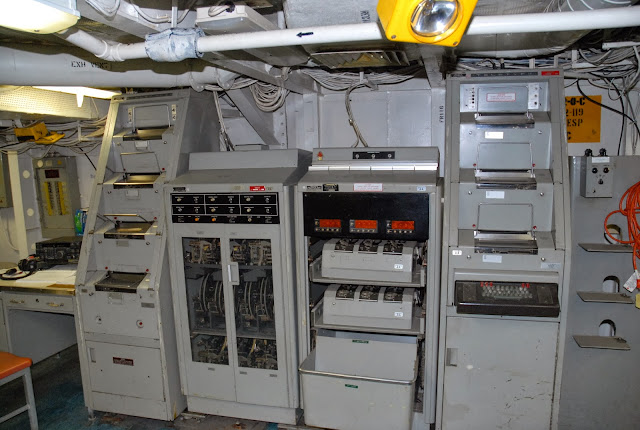 This is where we operate our newly acquired Kenwood TS-850. The antenna used for this position is a "Trussed Monopole" located behind the #3 turrent, and just forward of the Helo Deck on the fantail.
I can't say enough good things about the TS-850. It was a groundbreaking radio when it first appeared, and still holds it's own today, especially if you modify it a bit with some crystal filters and a narrower "Roofing Filter". Just a fabulous radio: 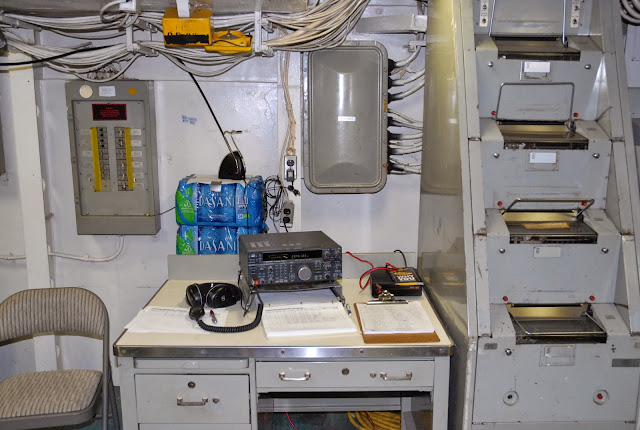 This is the #3 station we ran. It's an ICOM IC-718, a good little entry level HF radio. This station ran on the other section of the Disc-Cage antenna located on the bow of the ship. Directly behind the radio are a couple of more teleprinters, while on the right are two donated units. The big gray lump is a Model 19 in a noise reducing enclosure, and I don't remember the model number of the smaller beige/tan one. I do remember they were in use at Western Electric when I worked there in 1971. I had a Model 19 in high-school, but ti was so loud that my parents would only let me run it until 9PM, then lights out! 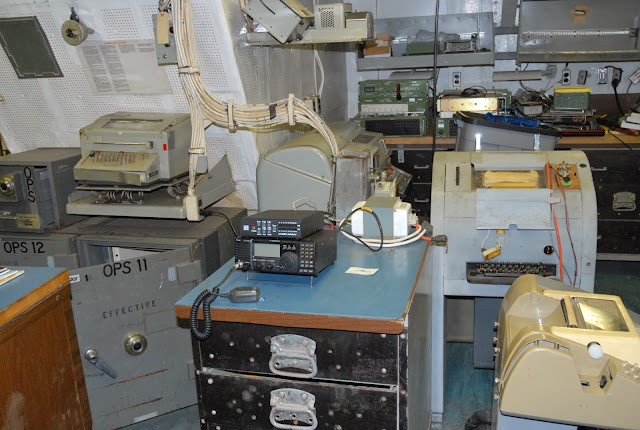 This rack has some other "newer" equipment, some of the earl CRT-based Data terminals, along with their support equipment. I know very little about this gear, but I'm sure I'll learn more about it: 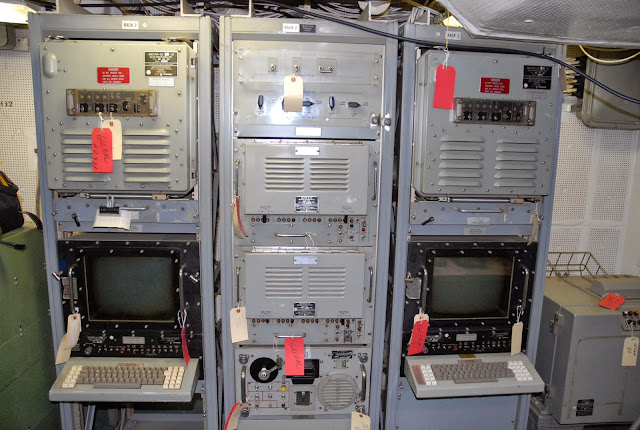 And it has the iconic "Battle Short" switches on it: 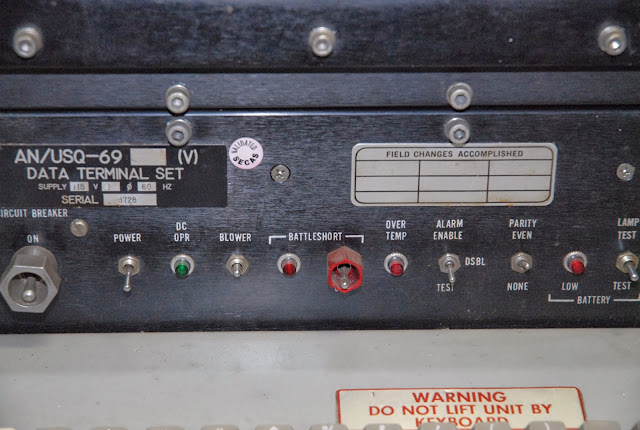 An alarm panel in the room: 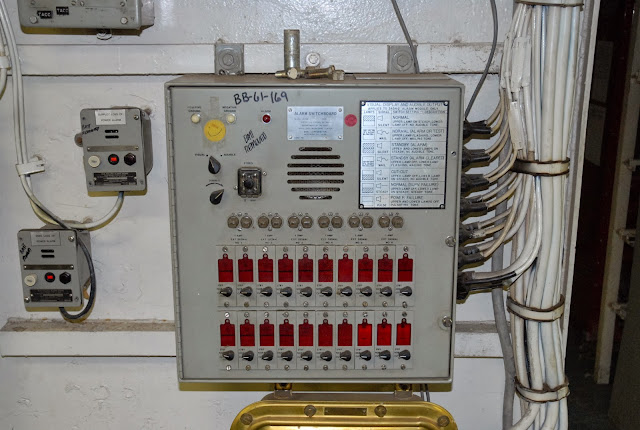 This is an area under construction outside the port hatch of the Comm Center. It had been for berthing at one time, but I think I was told it's going to be converted into an office for some of the staff: 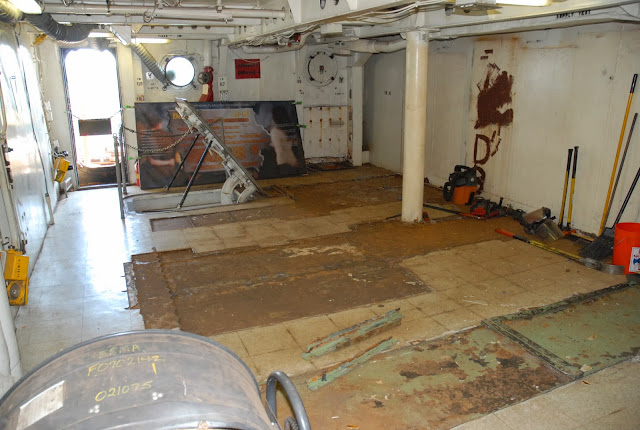 And speaking of berthing, here's one of the berthing areas: 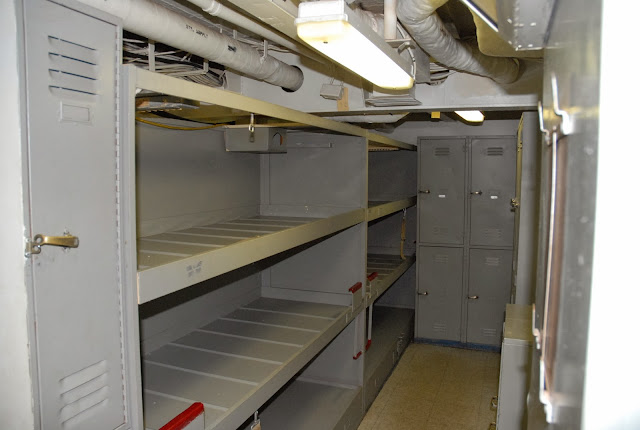 At least the crew didn't have to hot rack, like the submariners did.

This looking down the passageway to the stern from the Comm Center. One thing you have to get used to on the Iowa is how small the "doorways" are. I'm used to working on a ship, so I know enough to ALWAYS pick my feet up when going over a transom, but I can hardly imagine all of the ship's crew scrambling, two-at-a-time, going different directions, through these when "General Quarters" was sounded: 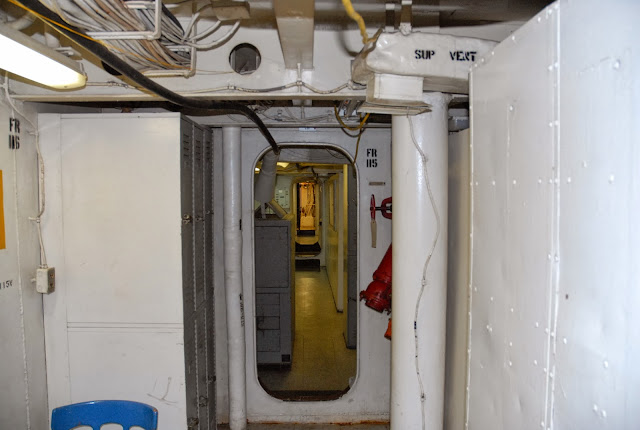 Here's a shot of the activities going on during the "Veteran's Appreciation" celebration. The band was just getting tuned-up: 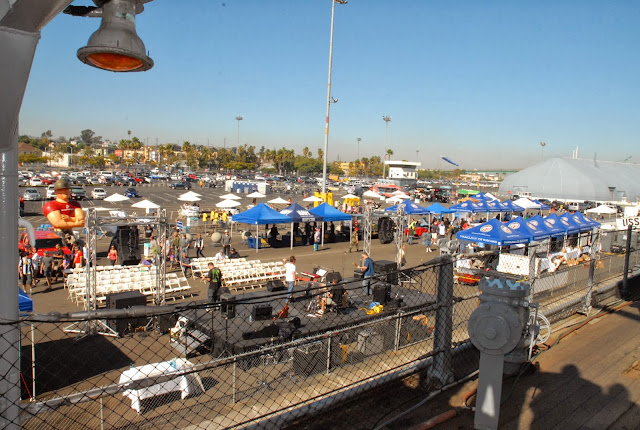 Looking aft towards the stern brow: 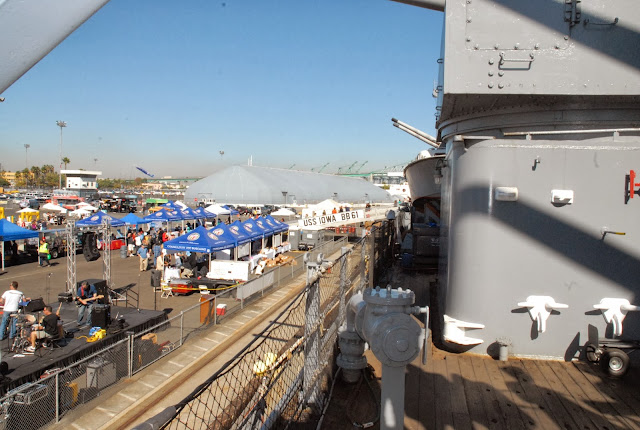 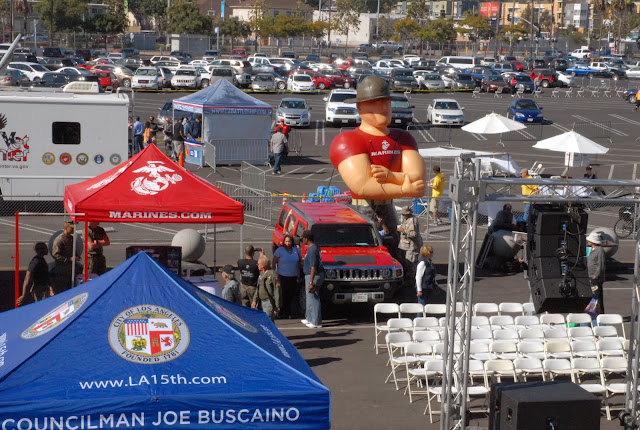 Some exhibits from the Fort MacArthur guys were there. The middle vehicle was a half-track with Quad 50's on it. One of these saved my Dad's life in the Pacfic during WWII. He and some of his fellow SeaBees were pinned down by a Japanese sniper in a tree, and as the Quad 50 was rolling by they flagged him down, and told him what was going on.

A minute later the top of the tree, and the sniper, were gone: 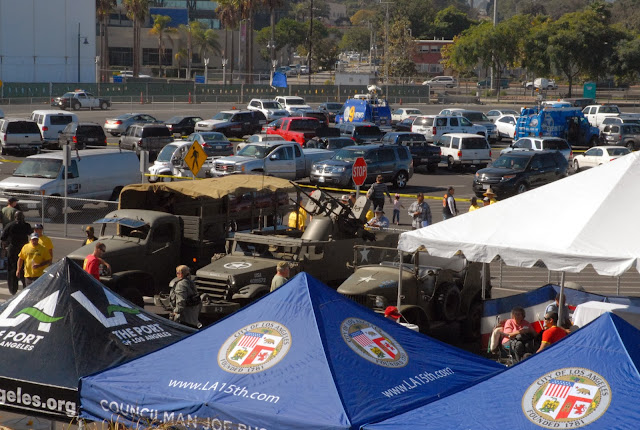 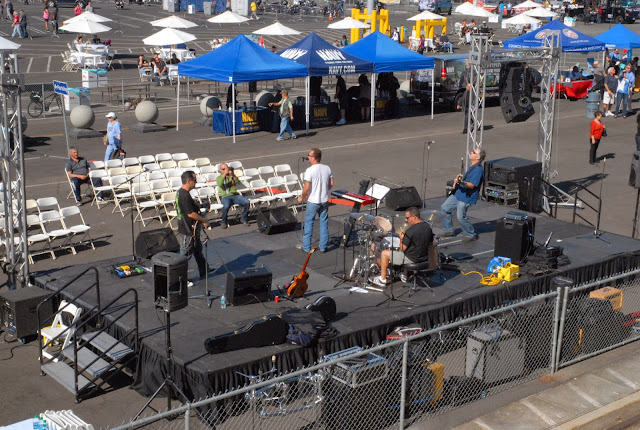 The VA was there to assist any veteran's in need of help (I hope....): 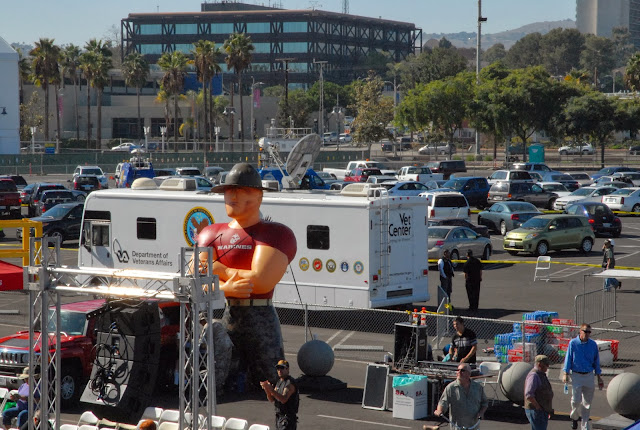 I would have taken more pictures of the exhibits, but I was pretty busy doing radio operations, answering questions, and having a good time. One of these times when I go down to help with some other things I'm honored to help with, I'll take the camera again and get some more "behind the scenes" pix!

One of the things I forgot to mention were the two gentlemen I got to meet.

One had been a Radio Officer on the Iowa during the Korean War, and was piped aboard, and brought to the Comm Center to see his old stomping ground. He was quite a guy, and explained some of the things the equipment was used for to us youngsters. He also explained how things had changed during the 1980's modernization of the Iowa, was quite happy to see that the two antennas we were using were still in good repair, and were working quite well.

The other gentleman I met while ordering lunch from one of the trucks in the "food court". He was with one of the other Iowa staff who I vaguely knew, and the staff member complimented us on getting the Iowa "On The Air", and talking to other museum ships. Now that we've got the antennas squared away, we're putting out quite a Big Signal, even running only 100 Watts output.

The Veteran he was with had been a Fire Control Officer on the Iowa during WWII, and kept us fascinated during lunch with his stories. I remember when I was little, and even when I was older, that when I tried to talk with my Dad about WWII, he didn't really want to talk about it. I'd get him started on something and he'd be telling about his travels through the South Pacific, and then he'd just clam up. and wouldn't talk about it. Maybe the passage of time has healed certain wounds, or maybe my Dad saw very different things that the gentleman I had the honor of having lunch with, but he told us some great stories about being at sea, and in combat, aboard the Iowa during WWII. How the ship reacted when the great Naval Rifles were fired, how the enemy shells sounded when they passed overhead, how the 40mm and 20mm AA guns put up a wall of steel and lead that enemy aircraft could barely penetrate, and general life aboard ship during wartime.

Every time I meet one of these men, I'm just awestruck by them. They were "just" ordinary men as they all like to say, doing extraordinary things during extraordinary times. Their country called them, and they responded, and did a magnificent job.

They truly are The Greatest Generation, and should be an inspiration to us all.
Posted by drjim at 11:32 AM