I spent most of today, up to Dinner Time, that is, refurbishing and installing the M2 Antennas EB-144 "Eggbeater" antenna that I had hanging in the garage rafters, along with one of my "spare" SSB Electronic 2 Meter preamplifiers.


This is the antenna, with the radial kit, after I cleaned it up, treated all the connections with an antioxidant: 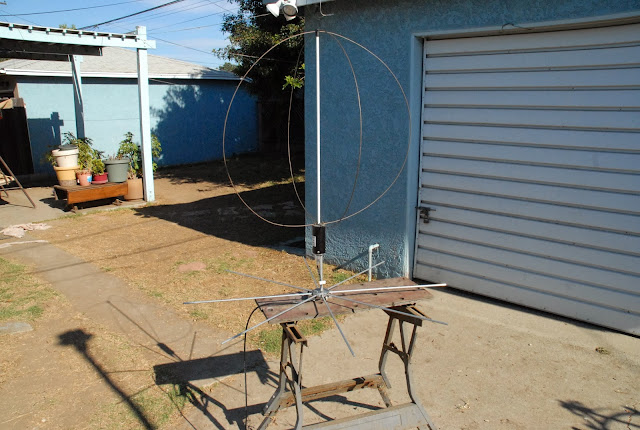 I swept it over several frequency ranges, and was amazed at how flat this thing is. I almost thought something was wrong until I went significantly outside of the 2 Meter band, and saw a more "normal" sweep result, looking like a very broadband antenna.

An "Eggbeater" type antenna is, very basically, two vertical loops, rotated 90* to each other, and fed 90* out of phase to produce a circular polarization.

Each loop by itself would have an impedance of about 100 Ohms, and fed in parallel, that gives you 50 Ohms, a good match for commonly available coax.

Since satellite signals are fairly weak, a good low-noise preamplifier, mounted close to the antenna, makes a significant improvement. So, I pulled one of my "spare" preamps off the shelf, and mounted it in a Rubbermaid tote box: 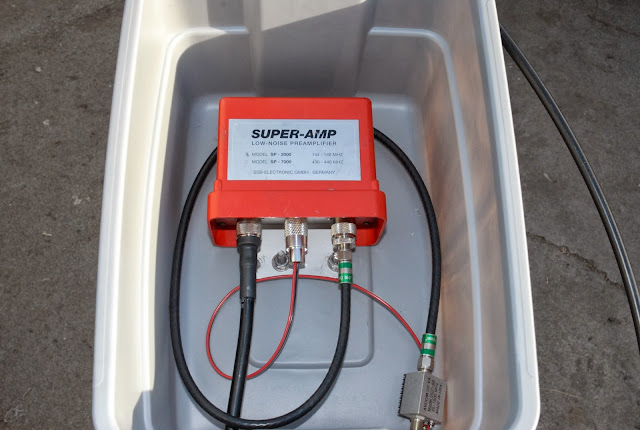 The little box to the lower right corner is a Bias Tee, which I use to extract the DC power for the preamp from the incoming coax. There's a matching one down at the receiver where I insert the power. I usually run a separate cable for the power, but I wanted to try this since I have a bunch of those little AVCOM bias tees around. Yep, that's a good old PL-259 used for a power plug on the preamp!

I made up a cable connecting the antenna to the preamp input with a PL-259 on the antenna end, and a Type-N on the preamp end. Since this is going to be outdoors, I put a large piece of adhesive-lined heat-shrink tubing over the connection at the antenna, and shrunk it down: 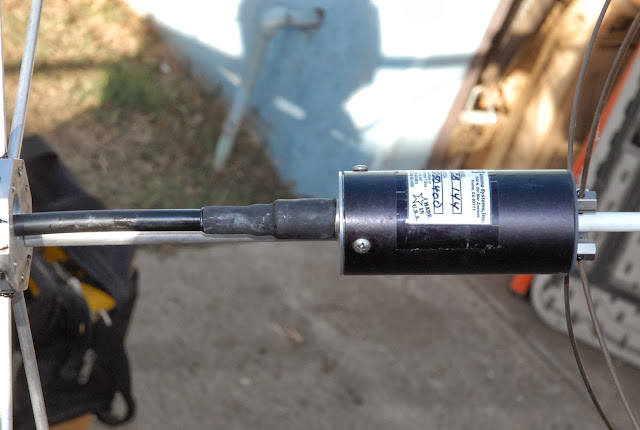 After all the cabling was finished and checked, I tilted it up vertically, and cable tied the mast (a section of 1" rigid conduit) to a big aluminum saw horse I have: 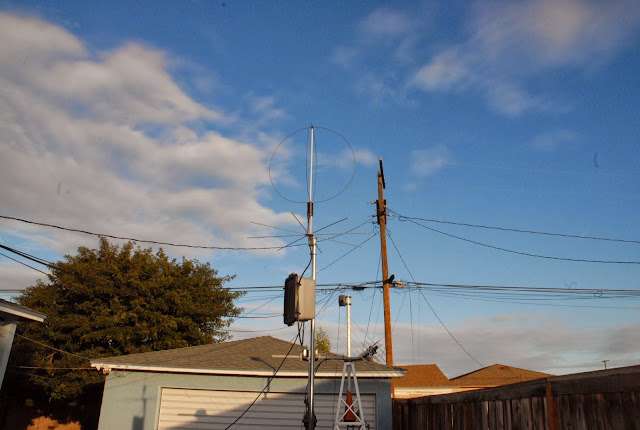 Some of my other satellite antenna mounts are slightly visible behind this new one.

Well, for the first time I was actually able to copy two people having a chat on the VO-52 linear transponder satellite!

Looking at the middle panel of the display in the screenshot below, you'll see a red line, with a blue 'band' next to it. The red line is the center frequency, and the blue 'band' is the passband for an SSB conversation.

The top panel shows a "speckled" area, and that's the display of the two Hams I was listening to.

If you look carefully, you'll notice that there's a definite shift downward in frequency as time passes, indicated by the bottom of the display (newest information) being to the LEFT (lower frequency) compared to the top of the display.

This is the Doppler Shift, going LOWER in frequency as the satellite was moving away from me.

The sideways "Vee" to the right of the guys I was listening to is most likely somebody "ditting" their VFO to try and find their own downlink. Since the transponders on linear satellites use differnet uplink and downlink frequencies, most conversations are full-duplex, where you can hear your own signal coming back through the satellite, with a slight delay. Generally what people do is to find a clear frequency to listen on, and transmit a series of "dits" while adjusting the transmitter frequency back and forth until they hear their own signal. 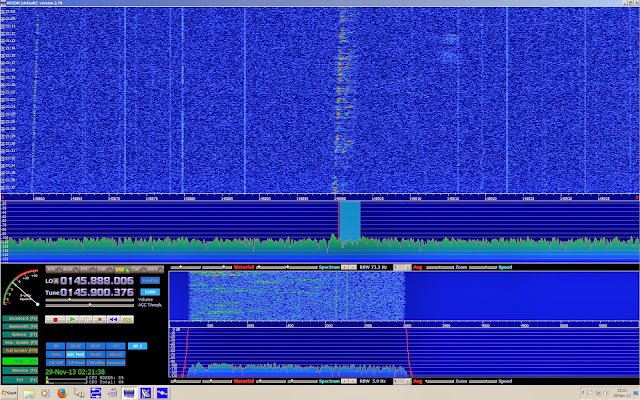 The only other satellite passes that were "good" before I started this post were from FO-29, which has a UHF downlink, and this antenna doesn't work (well, actually the preamp filters everything out) on UHF, so I'm waiting until 0456 UTC for AO-73 to pass over, and maybe I can (finally!) capture some telemetry.

Tomorrow I'm going to raise this antenna to it's more permanent height of 20', and anchor it to the side of the house. The extra ten feet of elevation will get it above the ridgeline of our roof, and should make quite a bit of difference.

Hope y'all had a very Happy Thanksgiving!


WELL.....I didn't hear any telemetry, but I copied W9ND talking to several stations on AO-73, The Satellite Formerly Known As "FUNCUBE-1"! 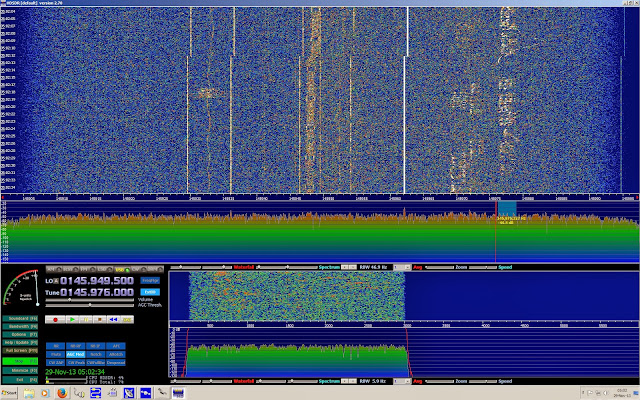 This time all the activity is on the right side of the top display, and you'll notice (well, some of you will....) a curving, slanted line near the top of the display. This was somebody "swishing" their VFO trying to find themselves, and they "swished" right through the conversation I was listening to, and it was neat to see it even though I've heard it many times when operating satellites.

2110 local time here, and I'm going to hit the rain locker, and then hit the hay.