This morning I decided to try and hear one of the NOAA "APT" satellites using the eggbeater I got going yesterday. I was going to raise it another 10', and anchor it to the eave, but it was raining all night long, and continued to rain until this afternoon, so I spent the time just using the antenna on a single 10' section of mast.

The NOAA "APT" (Automatic Picture Transmission) satellites have been around since the 1960's, and I used to record the audio from a modified scanner, and then process it with some free software, but I never had a dedicated antenna, so it was more for curiosity than anything useful.

This antenna works very well for receiving them, and they're LOUD! Unfortunately, the HDSDR software I use doesn't have bandwidth settings high enough to accommodate the wide signal the APT satellites use, so when I try and process the resulting audio file, I keep getting "Telemetry Not Found", and the program I use (WXtoImg) doesn't process the audio into a picture.

The SDR# software allows much wider received bandwidth, but by the time I finished messing around with HDSDR, all the high elevation passes were finished for today, so I'll have to wait until tomorrow afternoon to try recording the signal using SDR#.

There's a tutorial on the RTL-SDR webpage on how to use SDR# for APT reception, but I'm a bit hesitant about mucking around with my Virtual Audio Cable settings, as I use those for digital modes with my Flex 5000, and it took quite a while to get them set up correctly. I'm pretty sure I wrote everything down about getting it working with the Flex, but I'll have to go through the binder I keep for the Flex, and make sure I have the settings properly documented before I start trying to use VAC with another program!

Between the two programs, I prefer HDSDR, even though the documentation is scant. It just seems more friendly to use, and if they included some wider filter options for things like the APT satellites, it would be just a killer program to go with your $20 RTL dongle. There's a fairly comprehensive "HOWTO", but it's written for an earlier version. Just ignore some of the screenshots, read the verbiage, and you'll be well on your way to using it effectively.

This is from the first time I tried using it on the NOAA satellites: 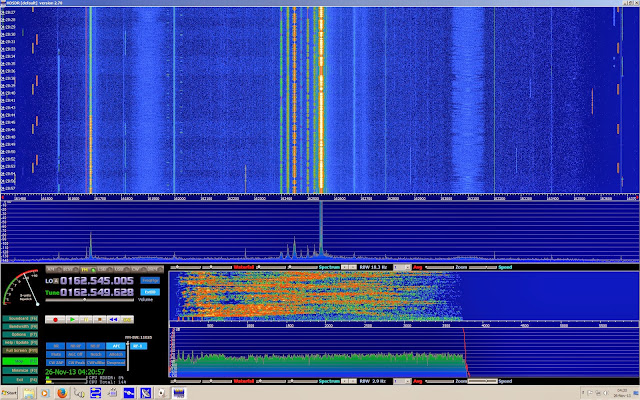 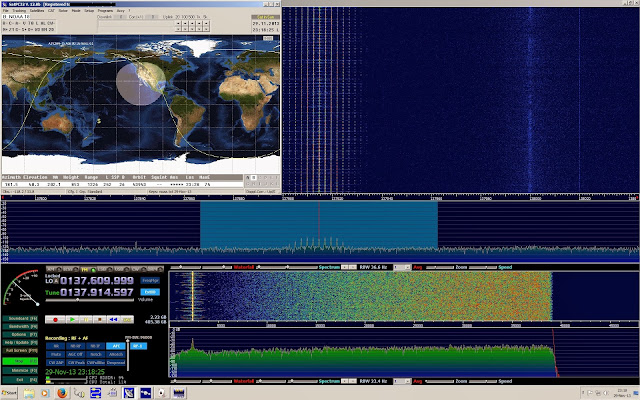 SatPC32, my satellite tracking program is running in the upper left corner showing where the satellite was when I grabbed this screenshot.

Immediately underneath the waterfall display you can see the spectrum of the satellite transmission. It looks like the bandwidth should be sufficient, BUT, due to my excitement at seeing the signals this strong, I was messing with the settings while recording the audio, resulting in a file the WXtoImg couldn't read.