Well now that the email is back working (network problem; not my yob, mon!), and things are getting somewhat back to normal, I just thought I'd mention the reaction I had to my #2 dose of the Shingrix vaccine.

I got my #2 shot a day or two after I was "over" whatever 48-hour bug I had. It happened in the two-day window when I was starting to feel "OK", and SLW got clobbered with it. I was busy tending to her and doing the housework, so I only noticed a bit of discomfort from having the spike pounded in to my upper arm that gave me the Intramuscular Injection, just like shot #1 gave me. Eh, no biggie, just a little soreness.

So while she's in the throws of that nasty little bug and I've "Got the Con" trying to run the place, I didn't notice anything until about 24~36 hours after the shot. Hopped in the shower, and........what's this?

Had a big, red, swollen patch on my arm below where the injection site was. Called the people at urgent care, and asked if it was anything to be worried about, and they said to just watch it, and if it got much bigger, more swollen, and started causing a lot of pain to get back to them. If I started having ANY breathing problems, and/or broke out in hives, then I should go post haste to the ER.

Nothing happened, the swelling went away, and all is well again. I've had some reactions to other shots (the cholera one was the worst, IIRC), and had a pretty severe reaction to some of the meds I was on for a few days when I had the stents installed, so kinds BTDT.

In any case, the reaction I had to the #2 shot was minor, and FAR better than getting clipped with a Shingles outbreak, as some of you know all too well, which is why I got the two shots in the first place. I tend to take medical advice from my peers seriously.

And the Chambers Lake / Cameron Peak fire is up to about 5,500 acres, with ZERO per cent containment. 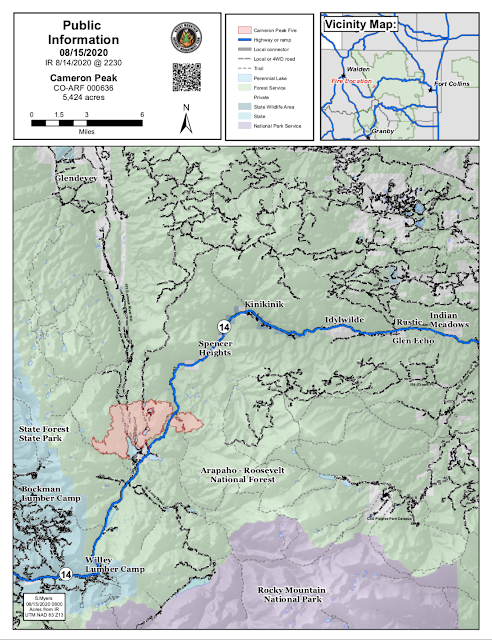 This is located about 40 miles due West of us, and the smoke is very noticeable, with some ash fallout. The ash is more like "dust", and it's enough to make you use the windshield washers to clean it off. I knew it was ash the first time I hit the squirters and saw the color of the mud that it made.

They have three helicopters doing drops, but it's too hot, too dry, and too dangerous to start hitting the fire directly. The crews are doing "Structure Protection" duty, and clearing paths and fire breaks.

And there's NO rain in the forecast until Tuesday, and then it's a "10% chance".

Gonna be a long, hot dry Summer and Fall, I fear, and I hope they can get a handle on this one. These guys are in the "Hero" category for going up against these fires as far as I'm concerned.