Much thanks to the Rist Canyon Volunteer Fire Department, and the Poudre Fire Authority for getting this contained, and mopped up. This fire was near Morning Fresh Dairy Farm, right next door to the Noosa Yoghurt plant where the kids work, and the dairy people were feeding all the firefighters courtesy of their "Howling Cow Cafe" operation.

We went out yesterday to The Rock Garden, a local supplier of decorative rock up on the North end of town. They have pallets full of different types of "flagstone", in sizes from small bits and pieces, up to boulders you'd need to call the Army Corps of Engineers to move. Most of the rock is excavated from their own quarry a few miles away, so it really is a local operation. And the people we met there were quite a bunch of characters.

We picked up a dozen pieces of "Colorado Red", each about 12" square, to use as a walkway through the little garden area we have in front of the house. Our handyman guy had put some down last year, but they were spaced too far apart, and too small in size, to be of any use in walking through the mulch to get to the water valve for sprinkling. 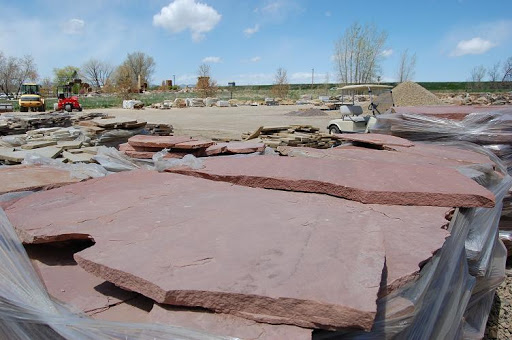 Those pieces are getting placed in various other parts of the yard, and the new ones will get installed over the next few days.

Tomorrow we're going back to pick out "our boulder", so we can have them etch the house number and a graphic on it, and then they'll bring it by and set it for us.

And yes, SLW wants a gen-you-ine BOULDER in the front yard. This one weighs-in at around 600lbs: 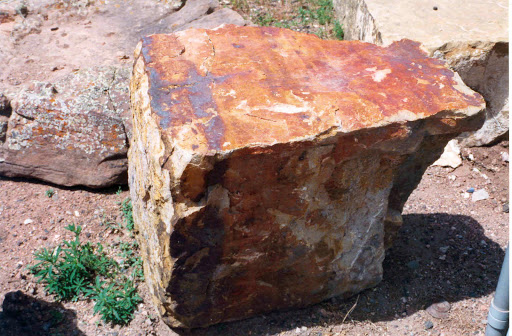 I think she wants a bigger one, but that picture from The Rock Garden was handy. I'm thinking more of a "slab" of rock that we can prop up in the back with some smaller "boulders". The stone cutter needs one face to be nice and flat so his stencil will stick to it, and stay stuck, until he finishes sandblasting the design into the stone.

This is going to be an interesting little project, as we get to pick the font for the address, and add a graphic to it. The stonecutter does the design work on a PC with a graphics program, and then transfers the files to his "Plotter/Cutter" that makes a stencil from a rubber mat with adhesive on one side. He then sticks the mat on the rock, and uses a sandblasting rig to etch the design into the rock.

3M makes a whole line of products for this purpose, and I was first exposed to it about 40 years ago when I went to repair a BIG air compressor and the local headstone company. I asked them why such a small shop needed such a YUGE sandblaster (IIRC, it was about 60HP), and the owner proceeded to show me how they made the headstones. I'd always thought somebody sat there with a chisel, and he laughed and said they hadn't done it that for about 75 years.

So, I'm off on another tangent for a few days, along with filling, sanding, priming, and sanding some more on the Supra's front bumper, along with properly setting the new stone steppers, and other grunt work.....