Well, we have a much more "local" fire burning in Rist Canyon along Rist Canyon Road. This is the area the in-laws live in, and they've been getting their critical items out of there.

From the Coloradoan newspaper:

The fire started at approximately 3:30 p.m. and is just north of Rist Canyon Road (County Road 52) and Pine Acres Way.

Fire officials have ordered a mandatory evacuation for residents north of Rist Canyon Road, west of Whale Rock Road and east of the Davis Ranch Road due to "immediate and imminent danger," per the Larimer County Sheriff's Office.

Voluntary evacuations are advised for residents living south of Rist Canyon Road from Whale Rock Road and all areas to the west up to Davis Ranch Road.

"You are encouraged to move livestock and pets out of the area and to prepare for mandatory evacuations. For updates, text the word LEWSTONE to 888777 from your cell phone. We will communicate information to that key word as needed. Please do not call 9-1-1 unless you are in danger," per Larimer County Sheriff.

The fire is approximately 30-40 acres as of 5:50 p.m., according to the Larimer County Sheriff. There are two air tankers, two heavy helicopters and 80 personnel on scene or en route.

One of the videos I watched showed a Lockheed Electra being used as an aerial tanker, but I couldn't make out any markings on it.

And here's the map: 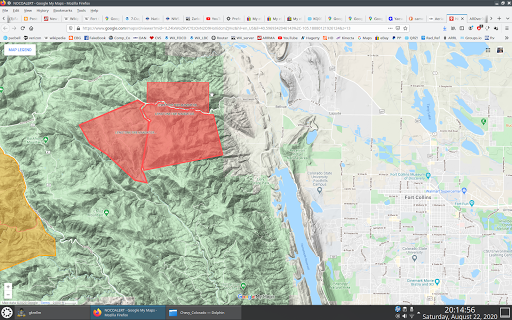 This is painfully close to, and overlaps some of, the area that burned in 2012, referred to as the High Park Fire.

And there's NO RAIN forecast for this area until Tuesday, and then it's only a 20% chance.

The clan's matriarch is in Cheyenne watching one of the little ones as daughter #2 just went in to the hospital for baby #2........