When this SGC-230 autocoupler was in use in Long Beach, it was in a clear plastic tote tub, mounted under the patio roof. Even though it was completely out of the sun, the plastic degraded so badly in the seven years it was outside that it crumbled and shattered when I pulled it down. For the 33' vertical experiment, I put it in a "Roughneck" plastic tub using a plastic breadboard for a back panel, and just plopped it on the ground.

For this iteration of my antenna "experiments", I need to mount the autocoupler to the fence, so I fell back on the way I did it in Long Beach, using two wood slats screwed to the enclosure, and then screw the wood slats to the fence slats using a length of 2x4 on the backside of the fence slats as a backer block.

Here's the stripped enclosure with the wood slats attached. 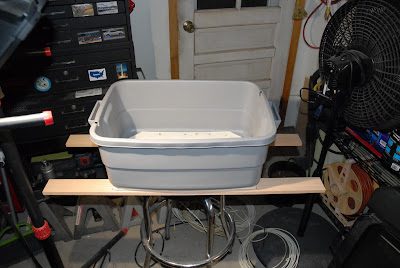 The slats are 1x3x36 oak from the Bargain Bin at Home Depot. Nice and straight and flat and CHEEP. I don't care that there's some chips and dents in them, but some people do.


Inside shot of the box. The horizontal rows of holes at the top and bottom edges of the white plate are the screws that hold the slats on. The vertical rows of holes on the left and right are the attachment points for the SGC-230. 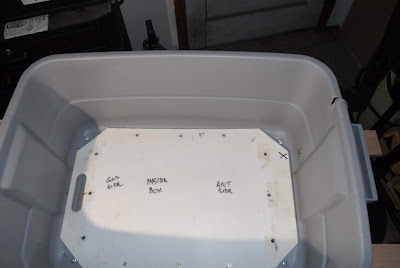 This is the "Input" side of the autocoupler. The cable contains the RG-58A coax bringing in the RF from the radio, the DC power and ground, and a couple of signaling and control lines for remote control. The autocouplers will work quite fine with just the DC and RF applied, but SGC designed them with a few simple features that are nice to have. There's a "Tuned" signal that indicates when the tuner has the best match it can do, and a line that lets you "Lock" the tuner and inhibit it from automatically retuning when the load changes. This comes in handy if you use these in mobile operation where driving past objects can temporarily cause the autocoupler to 'hunt', and constantly try and rematch the antenna. The big stud on the right side is where the radials/counterpoise/ground system attaches, and where I'll reconnect the four radials I already have fabbed. 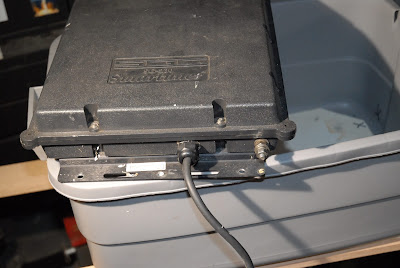 And this is the "Output" side or "Hot" side of the SGC. The ceramic terminal is the connection to the radiator. The piece of heavy cable you see is NOT coax; you never run coax on the output of these devices. It's a piece of "GTO" cable, meant for neon signs, and is rated at 25kV. Since this will be mounted out of harm's way, I can connect the antenna wire  to this terminal, taking care to provide an adequate amount of stress relief, i.e. slack. 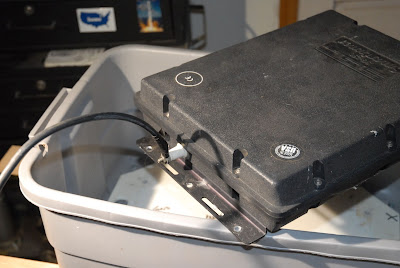 SGC-230 all bolted back in the box, and just about ready to go! 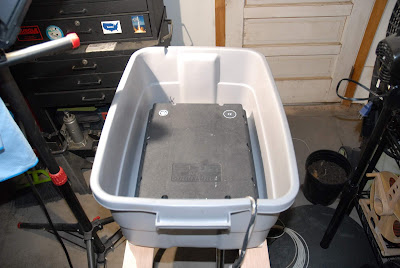 The SGC autocouplers are another item I highly recommend.  I've never had one fail, and I've seen them mounted outside "AS IS", with no additional enclosure, on vehicles and boats, and while they looked pretty sad after 5+ years, they continued to function perfectly. There are other companies out there making very similar products, but I own two of these, and in the twenty-five years since I bought them used, they just keep ticking.

And best of all: 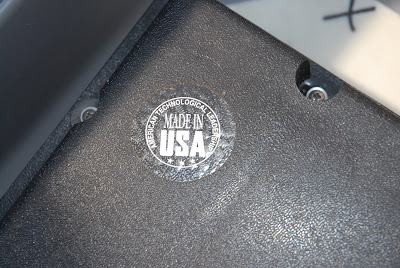 So I'm humming along with this project, and have a few bits to gather up before the major stuff starts taking place. I'm going to try and get the end masts and autocoupler enclosure mounted on Thursday, depending on availability of my neighbor. The backer blocks are on his side of the fence, and he wants to help, so I hope he's around.
Posted by drjim at 7:50 PM