Construction Delayed Due To Spring Cleaning

The wife is having a friend of hers visit for a week, so I agreed to 'stop work' on the antenna after the weekend so I could help with the cleaning required before her friend gets here. I haven't completely stopped, but from outward appearances I'm doin' the Homeowner Thing.

Scrubbed all four bathrooms today; toilets, mirrors, and vanity tops all sparkle. Swept and mopped the floors, too!

Then I proceeded to check the wattage of the light bulbs in the kitchen ceiling fixtures so I could see what was in there, and put in some brighter ones per the wife's request.
10 minute job, right?

Instead of getting my ladder out, I used one of those "light bulb grabbers" on a pole to unscrew the bulb. WELL......the bulb didn't unscrew, the fixture did. Just came plumb apart before my very eyes, it did! I was astonished that someone could have put the fixture together so poorly that the torque requirements to remove a stinking light bulb overwhelmed the prevailing torque of the various screwed together parts of the fixture.

Then I remembered where I was, and started laughing. Every.Single.Thing the previous home owners touched is screwed up. Curtain rod hangers too close together resulting in curtains with huge gaps (and light leaks) to the window sides, towel racks held to the walls with spit-and-spackle, toilet paper holders that ripped out of the wall when you tugged on the roll a little too hard (happened to the wife), and other misadventures of a flip gone wrong.

At least all they touched was cosmetic stuff. Very annoying, but *zero* safety hazards that I've found.

And since we have The Little Guy from early Sunday afternoon to late Monday afternoon, much time was spent pulling his Little Red Wagon around the cul-de-sac, playing with Pebbles in the back yard, and seeing him do his best "WHOA!" when he saw something new out in the garage. We then spent quite some time explaining all the things he pointed at and said "Whazz Dat?". He was bit upset that gramma's car was parked in the driveway instead of the garage, but since it made his wagon (and the stroller) much easier to get out, he pretty much let it slide.

Talked to neighbor about using the auger to bore the hole for the new post that'll be both the end mast and autocoupler mount, and he agreed it was one of those "D'OH!" decisions that we both overlooked until faced with the Magic Disintegrating Fence. And while the post is in the garage, I'll drill some pilot hols for the hardware I'll be using to mount the mast and the coupler box.

And I lucked out and found a Yaesu SP-5 speaker. 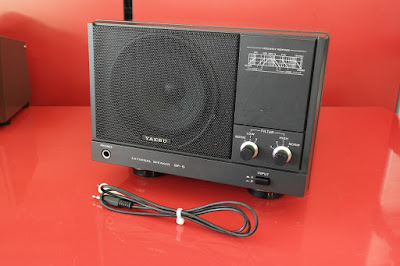 This is the "matching" speaker for the FT-1000 and 1000D radios, and looks much nicer than the Palstar I bought to use with the K2. The Palstar didn't work very well with the Yaesu. I had to run the AF Gain (volume) at about 90% or greater to get a decent sound level out of it. If I had the headphones at a comfortable level and pulled them out, you could barely hear the speaker. Very disappointing.

The Yaesu speaker has switchable filters, consisting of capacitors and inductors, allowing you to "roll off" high, low, or both, ends of the audio. They're passive filters, and make a noticeable difference. I also took the cabinet apart and used some stick-on acoustic foam on the insides. It makes the enclosure well-damped, and eliminates annoying "buzzes" and other enclosure resonances.

So we're still plugging along on the "Great 84' End Fed Hertzian Antenna Project", but running at lower capacity for the next week or so while the wife's friend is here.

And I still have two more days to help with chores, and probably get some other home owner issues addressed.
Posted by drjim at 9:39 PM