Now that the wife's friend has returned to SoCal, I can *really* jump back into this wire antenna project.

As I noted last night, this thing has "ears", especially below 20 Meters (14MHz), which is going to be very useful during the Sunspot minimum that's going on right now. And it's also quieter than the vertical ("Vertical Antennas Pick Up More Noise"), which gives me some S/N ratio improvement, always a Good Thing. 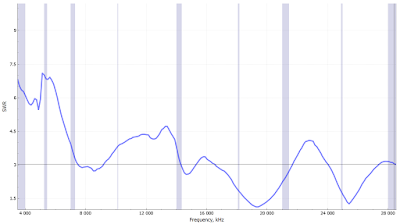 And this is a sweep with the length reduced to 84'. 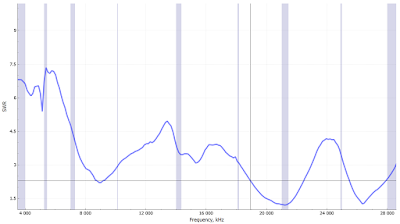 They look very similar, but notice that the "peaks and valleys" have all moved to the right. This is consistent with a shorter length wire even though this is not a resonant antenna.

The blue vertical lines correspond to the frequencies of the US Amateur Radio bands, which is where I'm allowed to transmit. The left vertical scale is "VSWR", a ratio of applied ("Forward") power to reflected ("Reverse") power, an indication of how well the load is matched to the source. Please observe that this plot has nothing to do with where this antenna resonates. All this plot does is indicate how this antenna compares to a 50 Ohm matched load. A Dummy Load (sometimes called a "Dummy Antenna") would have a perfect 1:1 match from "DC-to-Daylight", and would appear as a flat line on the graph.

Here's what one of my dummy loads looks like: 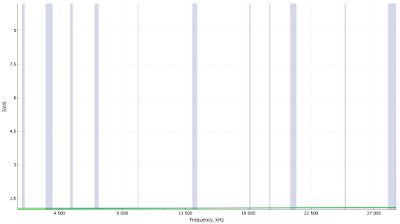 See the green line at the bottom? VERY low VSWR, indicating an excellent impedance  match, which is why Dummy Loads are very useful for test purposes.

I'm not a guy who obsesses over getting the mythical 1:1 match. It never happens in the real world anyway, except maybe at ONE frequency, so it's not Real World to do that. I'm concerned with the areas below the 3:1 line, and what those frequencies are. This  transmitter will not function properly with a mismatch greater than a bit over 3:1, and dials the power back to a few watts to protect itself. Anything I can do to make the mismatch lower than 3:1 in the frequency bands I use (the blue vertical bars), is a truly great and wondrous thing.

So I futzed around all day shortening the antenna, adding two more counterpoise wires, making measurements and then doubling the length to 100' on the top two counterpoise wires, and taking the measurements again. Had to lengthen the rope at the far end, as shortening the antenna means a longer support rope, and I want enough rope to have the antenna completely slack on the ground, with another 10'. WELL.....as I was getting ready to tie on some more rope, I let got of the existing rope without having the free end tied off. Faster than I could catch it, the antenna dropped the rest of the way to the ground, pulling the support rope completely out of the pulley, and I watched the loose end of it fall to Earth.

GROAN.....had to drop the mast to rethread a new longer rope through the pulley, wasting a bunch of time due to my oversight about using enough rope the other day when I put this up. Oh, well.....beautiful day outside to do this stuff, and dog and I spent time playing ball and chasing wires and the errant squirrel around the yard.

I'll do a "Round 2" post detailing some changes I made today that improved things a bit. I think I see what's happening with the changes I made, and they're right in line with what I know about antennas.

But it looks like 75 Meters (3.5MHz) and 40 Meters (7MHz) will remain out of reach with this configuration, and this tuner in this radio.

Which is precisely why I need to get the SGC autocoupler mounted at the feedpoint.
Posted by drjim at 6:56 PM