Since the wife is off entertaining her visiting friend, and it's too soggy in the backyard to do much right now, I've been tinkering out in the garage addressing a few items on the "88' Antenna Project" list.

One of which is an "Entrance Box" for the coaxial cable and power/control cable for the SGC-230 autocoupler. Getting cables in and out of a residence can be a tricky thing. Getting them in and out properly, while looking "acceptable", can take a bit more doing. The installation has to be weather proof, and critter proof. I'm going with two 8x8x4 outdoor-rated, plastic electrical boxes. They'll be mounted back-to-back, one inside, one outside, and will give me access to the cables I need, with some "room to grow" in the boxes.

Here's the outside one taking shape. 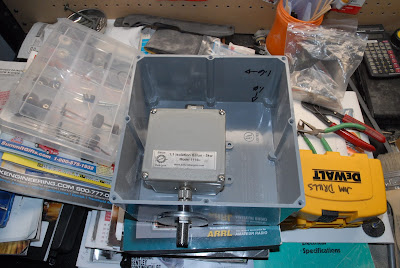 The box-within-the-box contains a large ferrite core with ten turns of RG-400 teflon coax wound on it, connected to an SO-239 jack. Basically a big honkin' inductance in series with the coax to block any RF currents on the shield of the coax, and keep RF outside the house. There's a 90* adapter on the output jack at the top, and that will be connected via a coax jumper to a long bulkhead feedthrough connector like you see at the bottom of the picture, which will pass through the wall to the inside box.

Since this is a plastic box, I'm using a large stainless steel fender washer as a reinforcement where the bulkhead connector passes through. There's another one that'll be going on the inside of the box after I cut down one side of it. If you look at the bottom edge of the washer, you can see some of it hangs below the edge of the box. That's about how much I have to trim off the other one so it fits in the box. I suppose I could have spaced the isolation choke higher, but I wanted it mounted flat. 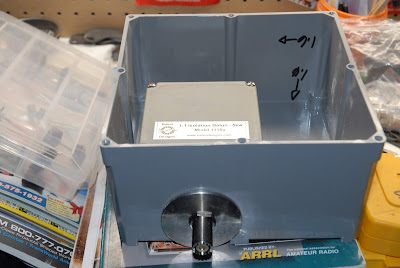 The mating box mounted on the inside of the house will have a bulkhead jack on one side of it, and a small cable for power to the SGC coming out. All I have to do to 'safe' the radio is disconnect those two, and we're isolated from the antennas in stormy weather. Both have gasketed lids, and I'll be packing the outside one with Styrofoam for some extra insulation.

So these meet both the Electrical and Wife Criteria, and should work nicely.

And say hello to the newest Radio Stray to take up residence at "Zarkov's Radio Ranch". 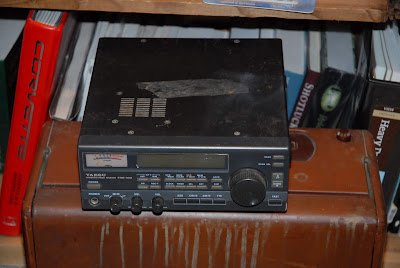 It's a little Yaesu FRG-100 General Coverage shortwave receiver in pretty "meh" condition. You should have seen it before the preliminary cleaning I gave it! It was advertised as "Non working because I don't have a power supply for it", so I'm assuming the worst. BUT....seeing as it uses a really oddball DC power connector that even I don't have, I'm temped to believe him. Even if it's mostly toast, I'm only out a little over $40, depending on what's salvageable. If it works, then I'll do a major clean and spit shine on it, as these are quite decent little radios.

Quick update.....I connected the little Yaesu to my power supply with a pair of clip leads, and it works. All the functions work normally, so after a good scrubbing, this little guy will either go on the shelf, or back on eBay, where functional units like this bring ~$200. Not bad for a $40 'investment'.....
Posted by drjim at 10:09 PM