Yet Another Post About SDR Using A $20 "RTL" Dongle

There's been a lot of chatter on various blogs and forums about using the $20 "SDR-RTL" dongles for wide-band receivers. For $20, and FREE software, you can hardly go wrong, as long as you keep in mind some of the limitations on these little guys, such as dynamic range, about 50 dB compared to 80~100dB for a "real" receiver, and selectivity. Their sensitivity is more than enough for casual use, and they're really amazing for $20.

These little guys plug in to, and are powered by your PC's USB port, have an antenna connector on the other end, and were originally designed to receive DVB-T (Digital Video Broadcasting-Terrestrial) television signals in countries outside the US. See the article "What Is DVB-T" for more info.

The basic structure of the dongle is a tuner, followed by a detector, usually a Quadrature Sampling Detector, which acts as an Analog-to-Digital converter. The most popular ones use an Elonics E400 tuner (favored because it has the widest tuning range, 52~2200MHz, with a gap between 1100~1250MHz), followed by a Realtek RTL2382U QSD/ADC/USB "Data Pump", which outputs 8-bit I and Q samples to your PC, where the software does it's magic, and out comes audio.

If you live in an area with LOTS of strong AM, FM, and Paging Systems, you might want to look into some filters (more correctly called "Preselectors") to put between the antenna and dongle to prevent the "front end" of the little radio from being overloaded with strong signals.

The dongle I bought from "nooelec" on eBay, and the two software packages I've been experimenting with are Gqrx for Linux, and SDR# for Windows.

From the little bit of experimenting I've been doing, the "best" settings for running these with SDR# seems to be with the RF Gain control set to minimum (-1dB), and the  "RTL AGC" box checked. These settings are reached by using the "Configure" button just to the left od the frequency display.

Here's a screenshot using one of the $20 USB dongles you can buy on ebay, connected to the Discone antenna I use for my scanner, and running under Gqrx on my Linux PC. 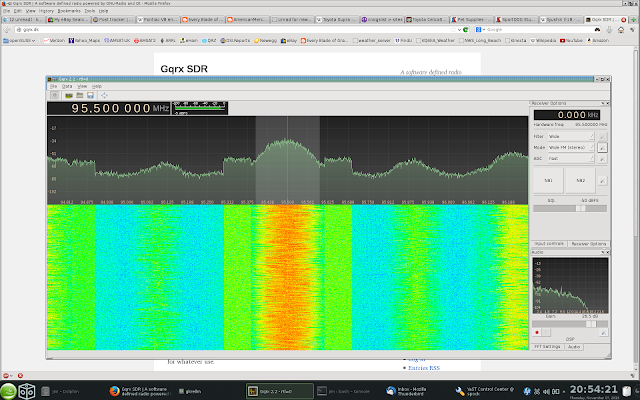 
I've run this same dongle with both packages, and here's a screenshot of the dongle running under SDR# on my Windows 7 machine. 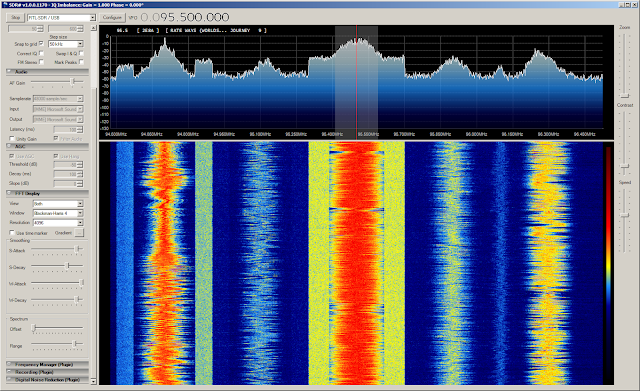 Both programs are displaying the same 2MHz swath of spectrum. The Windows program has more adjustments in terms of what types of filters, sampling rates, and noise reduction is used.

I've also used it with HDSDR, but that program seems to be more suited to "Communications Quality" audio, and although it has a TON of adjustable "stuff" to play with, I couldn't figure out how to get the bandwidth high enough for Broadcast FM. 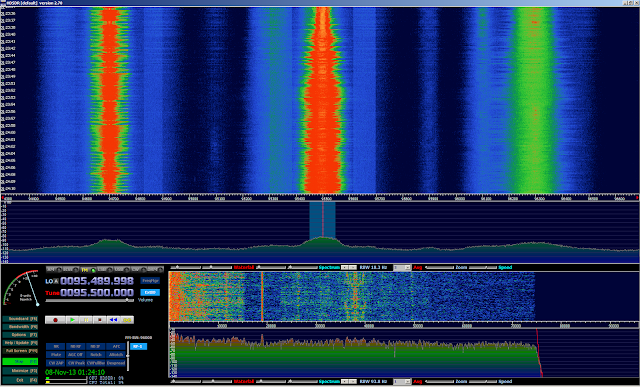 For the more "hardcore" Linux users there's Linrad, and if you're really a masochist, you can get GNURadio, which I've never been able to figure out, as it's more configurable than EMACS!

I also have a FUNCube Pro dongle, which has since been replaced by the FUNCube Pro+ version. These are much higher quality, with a much wider tuning range, and at a much higher price, currently about $201, depending on the exchange rate with Great Britain.

SO, if you're interested in using one of these for a receiver, you can't hardly go wrong for $20, and some FREE software. They won't replace a good communications receiver, or a scanner, but you can have a lot of fun experimenting with them.
Posted by drjim at 5:54 PM