Well, thanks to some answers from the guys on the Audio Science Review forum, I was able to "fix" the deck so it runs at correct speed.

This is the 50Hz position, where I had the belt installed: 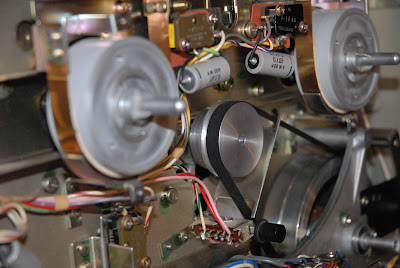 And this is the 60Hz position after I corrected my error: 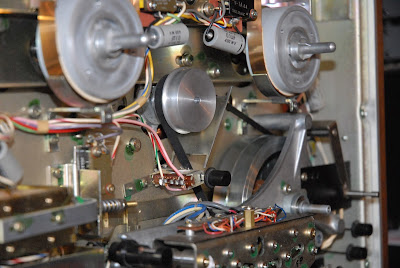 See how the belt is now "down further" than in the first pic? Yup, changes the drive ratio between the capstan motor and the capstan/flywheel assembly. I didn't know that TEAC provided the ability to run this machine on either 50HZ or 60Hz. It's not mentioned in the Service Manual, and this machine was sold as strictly "115V/60Hz". The "U" in the model number means it was made to be sold to US Service personnel stationed overseas. Pioneer and Sony did the same thing, but having "missed out" on the whole BX/PX (which is it these days?) experience, I had only a fuzzy knowledge of the items you could buy at a substantial savings over what we'd pay for the (mostly) same item in the States. It's nice that TEAC let this design element stay in these purpose-built machines for those times you needed to run on a different power line frequency.
The original drive belt was in three pieces, and I cleaned both pulleys without making a note of which of the two sets were dirty from the belt. Oooops! And then I didn't look closely enough to see that 1) There's TWO sets of pulleys, and 2) ONE of the sets had some wear marks on it making it easy to see (if you LOOK) which set was used. If you look at the aluminum pulley in the top picture, you can see it has some wear marks on it, indicating the belt was riding on it. I though it a bit "curious" that the pulley I was putting the new belt onto looked pristine, while the other step below it didn't. That's a big D'OH! on me, and a rookie mistake that I should have caught. As a Wise Old Mechanic once told me, and it's been excellent advice in my career, "You Have To Learn How To Hear What The Parts Are Telling You".
Anyway, back to the deck.....
It's all put back together, and all the pre-recorded tapes The Colonel gave me, including the Bob Hope USO Show, sound amazing. All I can find so far is that Mr. Hope was there in 1969, 1970, 1972. Now I'll try and nail it down to only those shows with Raquel Welch, and I'll have a better idea. SLW wants to listen to the entire tape. The quality of the recording is excellent. It was recorded with perfectly balanced levels, and you can hear every.single.word the performers say. It's like being on-stage with the. It sounds like it was recorded directly out of the mixing board.
UPDATE ON SON'S CALEXIT
He's spending the night in Grand Junction. Thursday is going to be a long day because of the detours. Thanks to Well Seasoned Fool, he now has a much better alternate route than what he was being fed getting from Google Maps. It adds some miles, but I'm assured it will be a better way for him to do the last leg of his exfiltration.