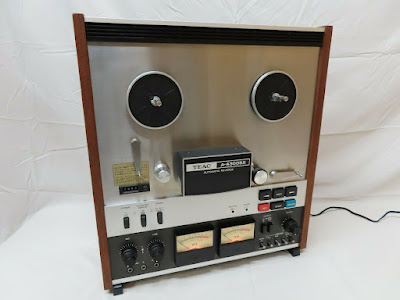 Should be here later this week. It's another TEAC, an A-4300SX, and is ten years newer than the one I picked up last month. "If I Woulda Known..." last month what I know now about TEAC tape machines, I most likely would have passed on the A-4010SU I bought, and gone right to this one. The mechanical bits are 90% the same, as it's still a TEAC "A-4xxx Series" machine, but it has significantly updated electronics, and better heads. It also has switches to adjust the Recording Bias, and Playback Equalization, allowing the use of newer formulation tapes, like the "Type @ Low Noise" tapes, and the "Type 3 High Output" tapes, sold as "LN", and "UD" from companies like Maxell. All I used before on my big Sony deck was Maxell tape, and it was significantly better than the Type 1 tape. "Type 1" tapes are the reddish-brown tapes, and "Type 2" and "Type 3" tapes are almost always the dark grey colored tape, owing to the use of a different oxide coating.

And speaking of heads, they heads on this one look to be in excellent condition: 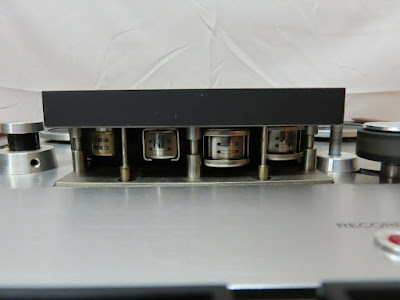 While my A-4010 shows definite signs of wear. They don't have any grooves in them, but show a definite wear pattern: 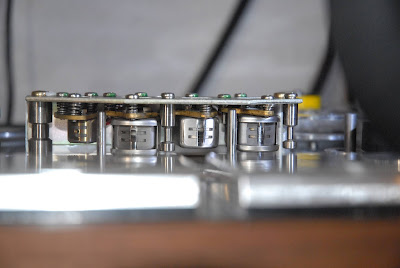 But way better than this one (photo courtesy of OakTreeVintage.com): 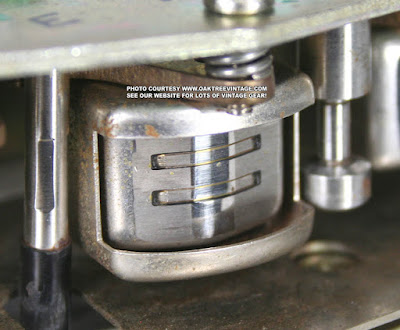 Now THAT'S a "groovey" tape head! I've seen machines advertised on eBay where the seller says "Plays and records fine, and sounds GREAT!", and then shows a picture of the heads worn this bad.

Anyway.....In the last month I've brought myself up-to-speed on the current state of analog magnetic recording, and found a great website with loads of information on the TEAC product line, complete with specifications, and reviews. They also cover every tape machine I've heard of, and a lot more I didn't know existed, or were too specialized/expensive for me back in the day. Eventually I want to "work my way up" to a TEAC 6000 series or 7000 series, but they're out of my budget range for now.