Possible Explanation of "Too Fast" Recordings. 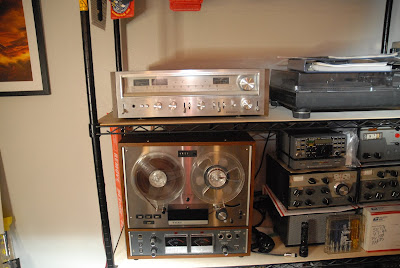 OK, so after pouring over the Service Manual for the TEAC, I see no mention of any "Speed Adjust", which makes sense as all three of the motors are AC motors, meaning they're pretty much "locked" to the frequency of the incoming AC power.

I'm shopping now for a "Test Tape", aka "Calibration Tape", which will confirm that the recorder is running at the correct speed. Until that gets here, I'm going to run 10 seconds of tape, and measure the length. Should be pretty close to 45" of tape at 3-3/4ips, and 90" of tape at 7-1/2ips. I know this isn't "exact", but it'll be a pretty good ballpark guesstimate, and will have to do until I can get a real test tape.

BUT.....what could have caused the deck to run slower than "normal" when these old recordings were made?

The only explanation I have is that the AC power at U-Tapao where these tapes were made was 50Hz power, and not 60Hz power. 220V/50Hz could be stepped-down to 110V/50Hz, making the Voltage OK, but not the frequency. Since I know little to nothing about the base infrastructure back then, or where they got their AC power from, this is a "First Order SWAG", and I might be 100% wrong.

Anybody know anything about the AC power used in SEA back then? I'm pretty sure if the were running on US generators they'd have 220/110 60Hz, but what if the "Host Country" supplied the power? The wikkipedia entry indicates that Thailand currently (no pun) uses 50Hz power, so I may have found the "problem" with the tapes running fast.