Which taught me an important lesson in being careful with Roundup! In the process of trying to keep the weeds down, I (thought I) carefully sprayed Roundup on *just* the leaves of the weeds coming up through the junipers. In retrospect, I should have gone in the garage, and got the other sprayer loaded with Weed-B-Gon, as it just targets "broadleaf" weeds.

Anyway....Over the last three Summers, the poor junipers got enough on them to slooooowly kill them, as seen below. 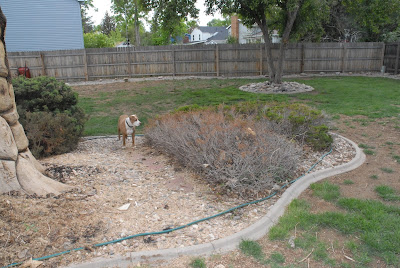 Don't worry, Pebbles. We have a Reforestation Program under way for your little private forest!

And holy smokes, this stuff is hard to cut! My Makita powered thought 8"~10" diameter sections of ash and apple wood without breaking a sweat, but took as long to go though a 2" juniper trunk as it did to go through 6" of ash, and it actually slowed down once (fresh batteries) as I was worrying through the trunk. 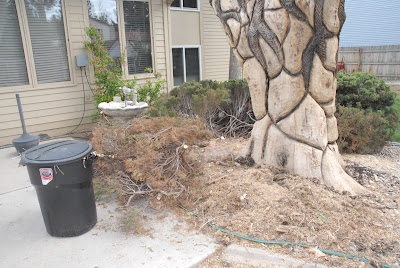 I'll worry about getting the trunk/root bits out later. Some of the completely dead sections just pulled right out, and the sawdust covered ground at the base of the trunk feels very spongy, so I'm hoping they won't be too hard to get out of there. I also pruned some of the scraggly parts of the still OK junipers, and then went back behind the pile to start in on this: 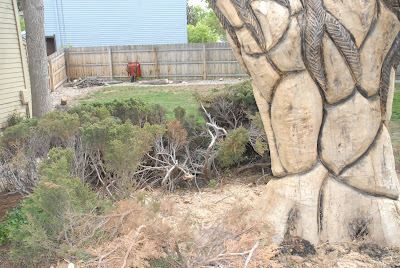 Some of the dead stuff is completely tangled together with the still OK plants, requiring some careful cutting, and much pulling, groaning, and sweating. I'm tempted to get the truck in here, put a tow hook in my hitch receiver, and YANK the stuff out.

It's very aromatic as it's being cut, though, reminding me of a "Balsam" scent. This immediately changed my mind from "Throw It ALL In The Trash" to "Hmmmm....Might Be A Nice Firewood Addition After I Strip All The Twigs Off".

Thoughts? Might at least provide some colorful flames, and a nice aroma.

The bad thing about this is junipers are considered a "9" on a scale of 1-to-10 for causing allergic reactions. I didn't have any skin reactions to it, but my sinuses are a bit plugged today. And I got about half the "free firewood" stacked-and-racked in the garage. Took four wheelbarrow (see pix) loads, and we still have MORE.

Another problem we have to take care of are these: 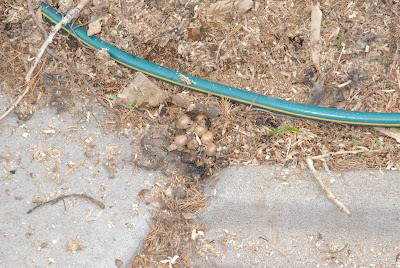 We've been overrun with these mushrooms this year. I couldn't see this group before because they were under the ex-juniper. I think the dead, now carved, cottonwood tree and all the moisture we've set them off and running with the knob cranked up to 11. We've been using vinegar, which nukes them in about 12 hours, so at least the "fungicide" we're using is cheap to buy! Our next door neighbor uses vinegar and salt on his weeds, and it seems to work OK, and he says it doesn't seem to bother the lawn.

After being run ragged today by TLG, I caught this snap of SLW and TLG taking a break: 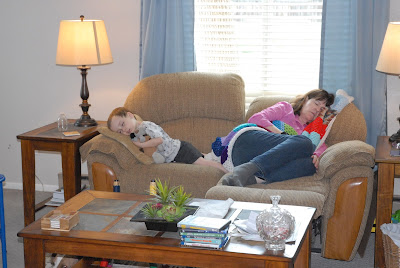