Gee, I wonder why Jim ripped his radio desk apart, besides the fact it was filthy, per SLW. 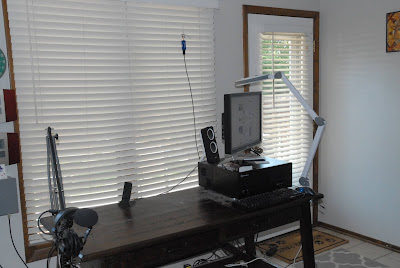 I dragged the PC out to the garage, popped the covers and air filters off, and blew out all the accumulated dust, lint, dog hair, etc, etc. Scrubbed the keyboard and mouse, too, and then attacked the now naked table with Endust

All the old gear I had out went back to the workshop, as I was going to need some desk space.

Hmmm....the FedEx version of the Brown truck of Happiness came by earlier and deposited a couple of things. 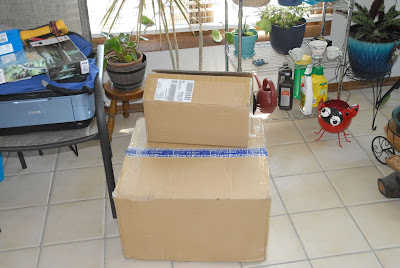 Wonder what they could be....? 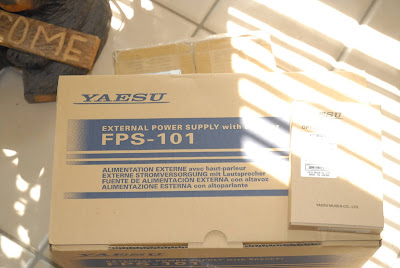 Why would I need a new power supply/speaker unit? 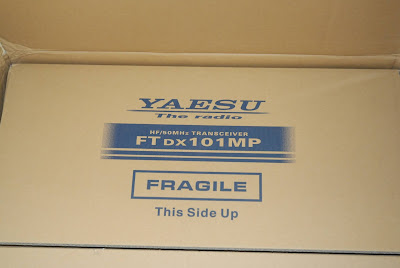 Whatever it is was sure packed well. The inner box had this cardboard/foam cradle to securely hold the boxes' contents. 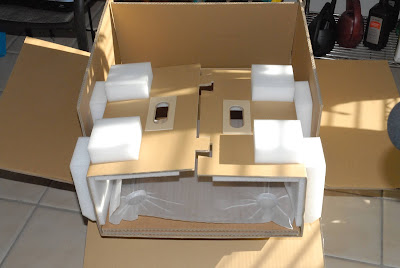 VERY clever packaging, allowing you to swing the "handles" up, and extract the contents. 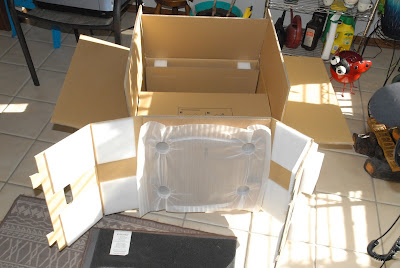 Cradled as if in a lover's arms when all packed up.

But what, Jim, Is In The Box? The briefcase from Pulp Fiction? The sacred stone from the Temple of Doom? 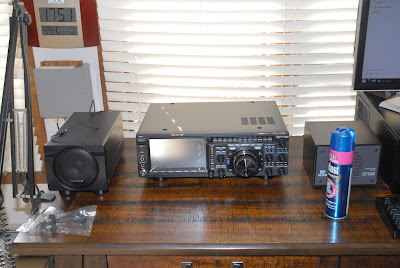 I haven't made any contacts with it yet, but the receiver seems to be quite a bit "better" than my previous Yaesu FT-1000D. Signals pop up out of the noise, and it has more bells and whistles than I may ever use.

It has a built-in "Band Scope", really a Spectrum Analyzer, that let's you see all the signals in a given slice of the band you're operating in. 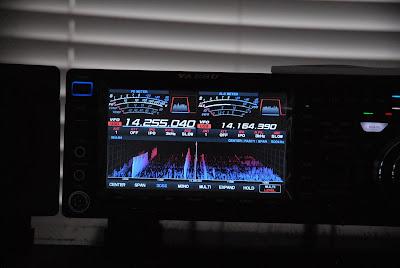 It has Dual Receivers, so you can monitor different frequencies, or even bands, to see if any activity pops up. I'll probably park the second receiver in the 50MHz band, so I can see if that band is "open".

For now, until I learn how to use all the adjustments it has, I put it in Single Receive mode.

One of the really neat things it has is a DVI jack for an external monitor, so I hooked it up to one of my old 24" Dell monitors. 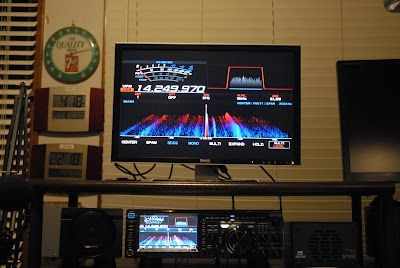 And there are USB ports on the front of the radio for a keyboard and mouse. The mouse allows you to select/change menu items, and the keyboard lets you enter ASCII text for a variety of things.

I'm going to retire the FT-1000D, and strip it for parts to sell. I love the radio, BUT I bought this one based on it's cosmetic condition, and threw snake eyes on the functionality. I've fixed half-a-dozen issues with it, it has several I *can't* fix (unobtainium parts), and when the RF output power dropped from 200 Watts to 15 Watts the other night, with no ALC indication on the meter, I threw in the towel and got my little Elecraft K2 out. I joked with SLW about how it was a good thing I'd cut up my credit cards when we moved here or I would have driven down to HRO in Denver the next morning and bought a new radio.

WELL......we discussed it, and since I've been saving my nickels and dimes for a new radio since we moved here, I had about 60% of what I "needed". She got out her card, told me to buy what I wanted, transfer the funds to her, and pay off the balance. Since I can strip about $900 worth of good, functional parts out of the malfunctioning radio, and then sell the hulk for ~$400. That will pay off the balance and rid me of that jinxed radio. To be fair, if I *ever* find another FT-1000D locally that's in good shape, I'll be on it like stink on you-know-what. They're that good, and if you want to do microwave stuff with transmitting and receiving converters, they're superb radios.

For now, I'm beat. Saw the Doctor Monday afternoon for some shoulder problems, and we also talked about some other things I was experiencing. She agreed with me to reduce the dosage of the Metoprolol I take from 50mg to 25mg, and for the first time in months, I wasn't getting a bit faint when standing up, and that's only on the first day of the lower dose. BP and pulse rate are fine, but we agreed that losing 50 pounds and becoming much more active called for a review.

We'll see how it goes tomorrow....