I'm not sure where my Dad was on D-Day, other than "Somewhere In The South Pacific", but I do know where my Uncle Clarence was. Uncle Clarence, or as we called him, "Uncle Diddi" (NO idea where the nickname came from) was.

I'm sure this picture will give you a pretty good idea. 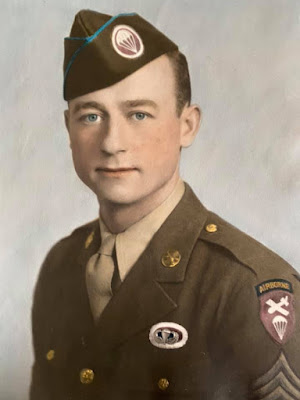 As far as I was told many years ago, he went in the night before (the midnight insertions), but I don't know if he parachuted in, or went in a glider. He has his jump wings, but I didn't know about the glider patches until my cousin posted this picture. And knowing very little about WWII Army uniforms, I don't know what the blue "stripe" on his cap is called, or is for, or the "halo" around his jump wings is for.

Update - The Blue stripe signifies he was Infantry. The red background of the "Airborne" patch, and parachute patch, indicate he was in the "Command Division", which probably goes along with his rank. It also explains why there's just a glider and parachute on the patch instead of a specific Division marking, like the Screaming Eagles, 82nd Airborne, and the others had.

I also didn't know he was a Sergeant before. Can't tell if there's rocker there or not, and I don't know what rank he mustered out with.

I'm very happy my cousin posted her pictures, and I'll have to bug my sister about what she has left of Dad's things. I never knew much about where he was in the vast PTO, except that he island-hopped along with the Marines and Army.

I am profoundly grateful and eternally indebted to the Greatest Generation for their service, sacrifice, and example.

May God Bless you all, and may you spend eternity close to Him.