Now that I moved my little home brew antenna outside, I'm picking up aircraft tracks out to 150 miles away. Most of them are pretty mundane; scheduled airlines, charter flights, student pilots and LifeLine flights. One that caught my eye the other day was an aircraft at 8,000', doing 35 knots. Wondering if the speed was a glitch, I looked up the tail number and found out it was a glider registered at the Owl Canyon Gliderport. I didn't look closely at his flight profile, but a glider could easily do those kinds of numbers into a headwind. 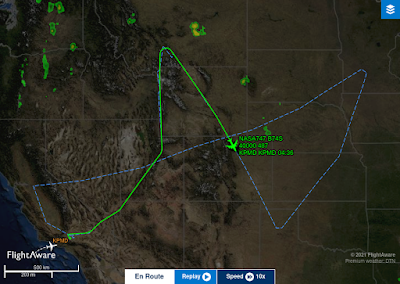 The solid green line is where he's been, and the dotted line is where he's going, per the filed flight plan. Departure and landing the sites were both listed as "Palmdale", so it's anybody's guess what they're doing tonight. Must be a "Chemtrail" run. That's why they do it at night now, so people can't see them!

And anywhoo....Mother and child are doing fine. The new parents were treated to a "Surf and Turf" dinner tonight courtesy of the hospital, but TLG didn't get to meet his new little brother as I originally thought. Strict rules are in place, and the only people who get into the Natal ICU are Mommy and Daddy. The NLG is doing fine, breathing without assistance, eyes open, looking around, and eating like a horse per his Mom and Dad.

I'll post some pix as soon as SLW sends them.