Just About All Taped Up....

After letting it sit for a few days to allow the filler to shrink (it didn't), I sanded it once more, wiped it off, and started taping it up to paint. 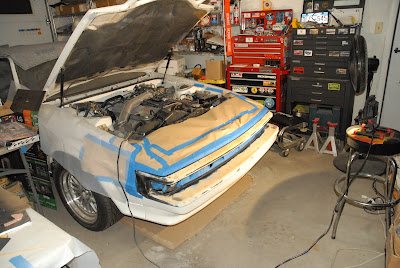 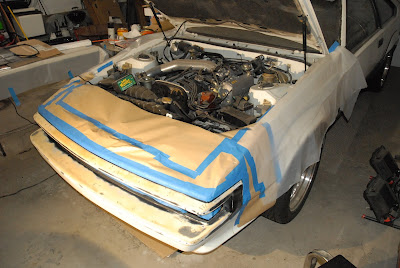 Still have the bottom section to mask off, and that's gonna be a PITA. Thursday I'll raise the front end about 12" with my jack, and put some stands under it to get the nose up so it's easier to get at, both for the masking, and the painting.

The engine compartment and hood will get covered with some old blankets. I'll dampen the floor and close all the doors to keep the dust down, put my respirator on, and spray it.  This paint and primer "flash off" very fast, and are dry to the touch in about 15 minutes. Then I'll open the doors and turn on the fans to get the fumes out.

As you can see in this google-sourced front end shot, there's a whole lotta body colored stuff under the lower edge of the black bumper, and all that has to be masked off. 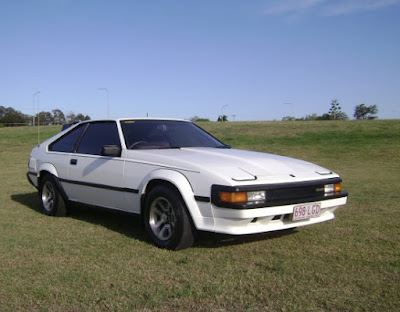 Having the nose up in the air a foot will so let me get down there easier to scrub all the white painted parts, something which I didn't do a long time ago when I "cleaned" the paint to get the crud off it. And I have to address some damage to the lower edge of the "air dam" (They call them "splitters" these days...) from people bumping into things with it. There's supposed to be an "Engine Undercover" for airflow reasons, but they generally got removed at the first oil change, as they "collect" the oil that spills when you change the filter, and any other stuff that leaks out of the engine. It pools there, and then drips out on your driveway at it's leisure, making for angry owners with oil-stained driveways.

If it were a British car you'd expect it. Marking it's territory, you know?

Anyway....the missing undercover also had some stout metal strips in the front where it attached to the lower edge of the airdam, reinforcing it to take the abuse of people hitting things. With the undercover removed, the lower edge of the airdam is floppy, and can get snagged on things. Then when you back up, it snags on the thing, and tries to peel itself off the car. So mine is a little tatty down yonder way, and I have some aluminum angle I have to cut and drill to fabricate some replacements.

I have a complete undercover, struts, reinforcing strips, and new hardware, but I'm not sure if I'll put it on, at least right now. I still have to do the timing belt, (and hoses, and belts, and alternator upgrade, and....and....and...) and putting the cover on now just means taking it off again when I do the mechanical work.

Getting the bumper refurbed means I can put the turn signals, fog lamps, and grill back on the car, and bolt the front license plate back on, the main thing that has stopped me from taking little local jaunts. I'm told Colorado is very strict about having a front plate, and I don't want tickets at "my age". The Cops not only write you the ticket, but chastise you a bit with "You Should Know Better!".......

Hopefully I'll have this painted in the next few days (yeah...I'm slooooow), and then I can clean the bottom of the front properly, wipe some paint sealer on it, put the rest back together, and HIT THE ROAD!!

Oh....gotta get the radio antenna and speakers installed, too. Just gotta have tunes on the road.....
Posted by drjim at 10:43 PM