Taped Up and Almost Ready For Paint

Got the front of the car lifted up about 18" today, and mounted solidly on some NON Harbor Freight jack stands. 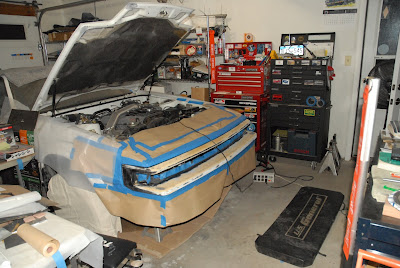 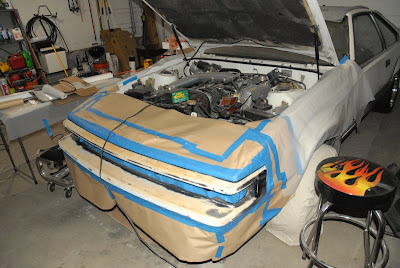 I'll lower the hood, and cover the front with some old moving blankets I have. Since this a "Rattle Can Job" the spray won't go very far, and I masked back far enough to prevent any overspray from getting on the car. I'll wipe it down with some prep solvent and check my masking once more, then spray it with the adhesion promoter, and then the color coat.

And this is the table SLW has been refinishing: 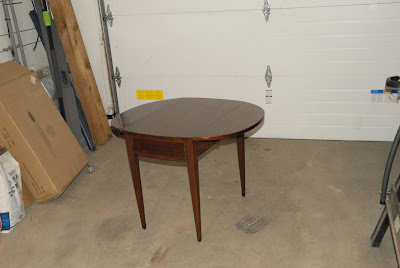 She saw it at the local ARC Thrift Shop and liked it, even though it has some really bad spots in the finish. She's been sanding away and learning things, and has just about declared it finished (no pun). She'll probably Varathane it tomorrow and then polish it out after the coating has cured.

This is the second one she's refinished, and her technique is getting much better. She's realized doing stuff like this is NOT as easy as a YouTube video makes it out to be, and that you actually have to pay attention to what you're doing so you don't do some damage that's difficult to repair, like sanding clean through the veneer, something I've coached her about, showing her how thin the veneer is in on spot where a small piece had broken away.

So it looks like I should have this painted in the next day or two, and it's been the #1 item on the punch list since I got the car.
Posted by drjim at 9:47 PM