Worked 12 stations in the SE and Lower Midwest on Single Sideband this morning and early afternoon. Signals weren't rock crushingly strong, but running "S7" to "S9" with a local noise level of around S4~S5, so they're well out of the noise, but with some fading.

Then I switched over to the "Digital" modes, running FT8, and made a bunch more contacts, including the guy up near Wellington with a HUGE 6 Meter station. The digital modes are nice for racking up an impressive body count, but they're very "sterile", and I'm not sure I care for them. It took me a few hours to get the SSB stations I worked, and about 30 minutes to get the same number of contacts with FT8.

You look in the display pane for the callsigns of received stations, double-click on one, and then just use mouse clicks to send "macros" (canned messages that are dynamically altered for each contact), then send "73" with a mouse click, and move on looking in your list for the next callsign to double-click on and start the process all over. 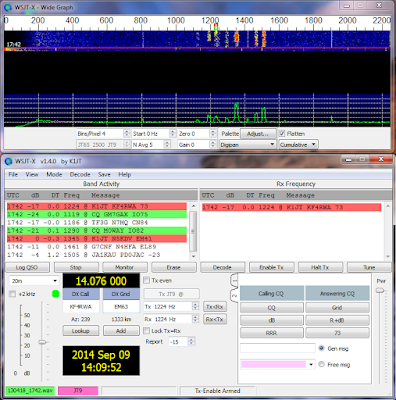 No manually tuning around the dial hunting down signals, no trying to get their callsign, and making sure the other operator has yours correct, no fighting interference from other close-in stations or static crashes, just looking at the list of received stations, and mouse-clicking on one. Some people don't care for fighting to dig out a contact, and they're drawn to these modes, and good for them. Variety is  a Good Thing, even in Ham radio, and the technology behind the software is solid, but it seems "artificial", and a bit boring to me.

It definitely proves you can put a signal into an area. How useful that is can be debated, because a large portion of the signals are at, or below, your threshold of hearing, meaning you couldn't talk to them using voice, but the software manages to dig them out and display the transmitted data. Yes, there are many, many other digital modes where you can have a live, keyboard-to-keyboard chat, like we did with Packet Radio in Ye Olden Dayes, and some of the digital modes are capable of staggeringly good performance in digging signals out of the noise, making them extremely valuable for sending data when conditions are marginal-to-bad.
I guess it just lacks the Human Touch of actually talking to someone. Even if it's just a contest exchange consisting of a few words and phrases, at least I talked to a person.