Spent the morning and early afternoon jumping between SSB and FT8. I could hear stations on SSB, but they were at my noise level or slightly above, meaning it would have been very difficult to complete a voice contact for me and these old ears. I wound up making one contact to a guy in Kentucky, and one to a guy in Louisiana, and it took about 5 minutes each. Some stations were booming in, but there was a huge pile-up of others calling them, and my ~50 Watts to a dipole 10' off the ground just don't cut it. I looked up the callsigns I was hearing, and yow....these guys were running "Super Stations", with multiple stacked antenna arrays, and "Full Legal Limit" power amplifiers. 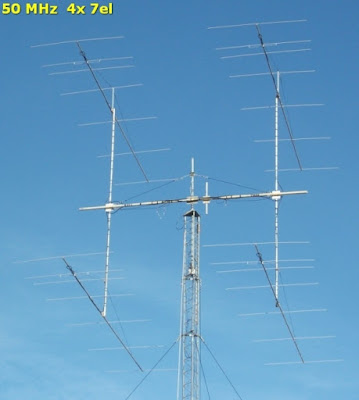 It consists of 4 separate antennas, each with 7 elements (the short horizontal  things), mounted specific distances apart, and fed with power dividers and very carefully cut and assembled lengths of coaxial cable. An old "Rule of Thumb" for Yagi antennas is that doubling the number of elements gives you a 3dB increase in antenna gain. 3dB equates to a doubling of the "Effective Radiated Power". Since a 7 element antenna like this has roughly 10dBd of gain on it's own, doubling to two antennas gives you 13dBd gain, and doubling the two antennas to four antennas gets you 3 more dBd, for a total  16dBd of gain compared to a Dipole like I'm using. 16dB is a factor of 40, so if he were running 1000 Watts of power, the antenna would focus it by a factor of 40, making it act like he was running 40,000 Watts to a dipole like mine.

This array belongs to the fellow up North of me on I-25, the first Ham antenna I saw in Colorado on our first trip out here. An antenna system like this is what a "Super Station" would run. They get extremely large at "Shortwave" frequencies, but on 6 Meters, where the elements are only 5' long on each side, you can build some pretty outrageous antennas.

Anyway.....As I was listening to the SSB frequencies, I would also flip over to the "Digital" frequencies every 30 minutes or so to see what was happening. Where I could barely make out the voice contacts, my monitoring software showed the band was alive with signals.

Here's my "Control Panel" for the WSJTX/FT8 software: 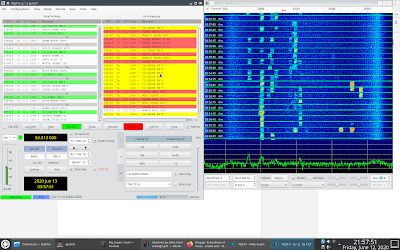 The leftside box shows the activity on the band, and the rightside box is a real-time spectrum/waterfall display.

The vertical stripes in the right box are stations transmitting, and this display shows  at least 10 that I can see. And this is at 10PM local time, on six meters. This is the result of the "Sporadic E" propagation mode, something I won't go into here.

I still feel a bit "remote" using the WSJTX/FT8 software, but geesh...you sure can rack up the contacts with it.

I've made over 70 contacts today, and I haven't looked at the how many "Grid Squares" or states I've contacted.

This is what a "dead" band (no propagation) looks like. The two strong signals (the patches of red) you can see are local guys. Otherwise, ain't nobody coming in..... 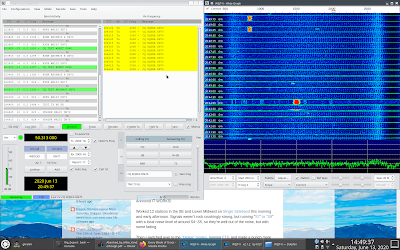 The band was completely dead (NO stripes on the right hand box) until about 45 minutes ago. 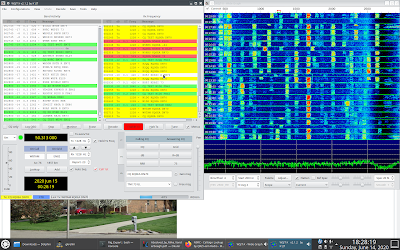 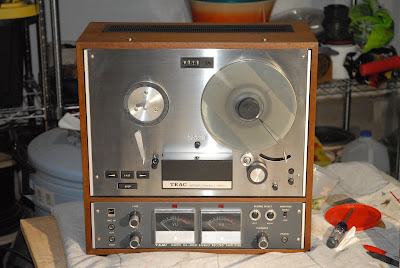