Couldn't get to the #2 donor unit until tonight due to some homeowner stuff I had to do/wanted to do.

Put an illuminated light switch on the stairway leading to "The Dungeon", aka "Radio Room and Electronics Workshop" because if there's no lights on down there after sunset....it's dark! And I could never find the light switch. Maybe I'm losing it, but it seems the light switches in most of the Colorado homes I've been in aren't where my muscle memory says they should be. They seem to be located on the other side of the stud, and I wind up slapping blank wall space and fumbling to find the switch, usually resulting in me getting my damn flashlight out to find the damn switch so I can turn on the damn lights, if you know what I mean.....

The first one had a little "ILLUMINATED" sticker on the side, the box said "Illuminated", and as soon as I flipped the breaker back on....NO illumination. It worked fine (it's a 3-way switch), but was a black hole. Swapped it out with the other one I had, and it lit up fine. Means taking another trip back to Home Depot tomorrow, but that's OK, as I forgot to stop by the CVS when I was over that way today.

Then I took down the 33' vertical, and dragged everything back in the garage. It didn't work as well as I had hoped for, and it made it a pain to mow the yard, so back to the drawing board. I have plans for a MKII version with elevated radials, and that might get finished this summer.

Then I did the Weed-N-Feed thing on the back yard, had some chow, and went out to the garage.

The reflector/lens from the #2 donor unit was a very pleasant surprise when I pulled it out of the bucket: 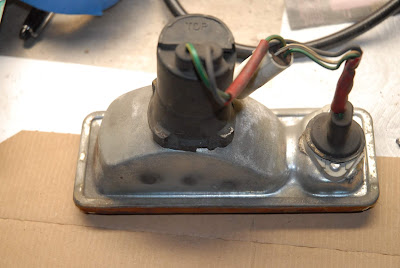 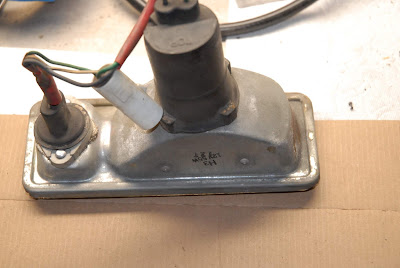 Wow......pretty clean considering how corroded the other one was! There's one "medium" rusted area. Looks like the flap wheel would make that vanish. 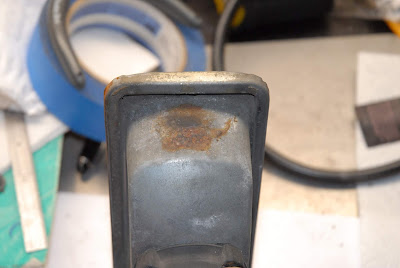 And one edge of the housing where the lens fits in is rusty, but I can't see any pitting, just light, bright orange, surface rust. The little buffer wheel will make this edge look very good. 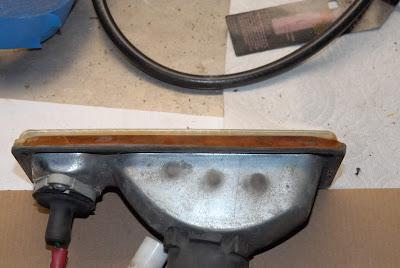 And the other edge has no rust, like the majority of this one. The flash plating that was on it (probably zinc with a chloride/chromate dip) saved the metal from rusting. 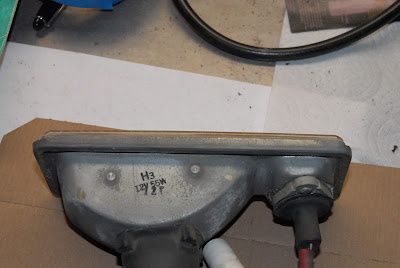 These should clean up in an hour or so. 15 minutes with the flap wheel on the rust, and then spend 30~40 minutes going over it with the little "ScotchBrite" buffer wheel.