After spending 5~6 hours cleaning the first reflector up, this is how it looks: 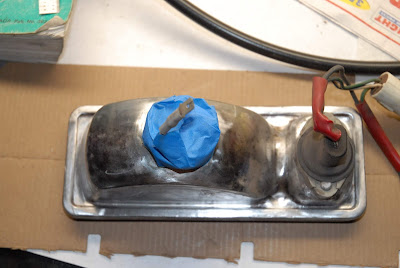 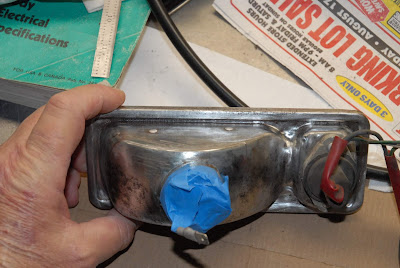 Quite a change from the "Before" picture: 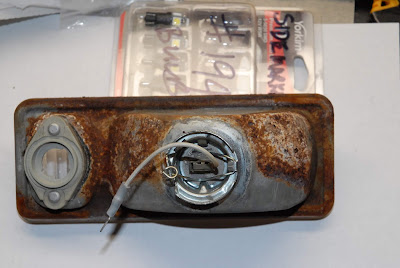 It's not perfect, but all the heavy rust is gone, and probably 90% of the pitting. Any remaining rust will be stopped by the Metal Prep stage of the refurb. The Metal Prep solution contains Phosphoric Acid, H3PO4, which chemically converts Iron Oxide, primarily FE2O3, into Iron Phosphate, FEPO4.

Iron Phosphate is cool stuff because it won't promote the formation of further rust, and readily accepts paint, or oil. Parkerizing is a type of Iron Phosphate coating, and it's pretty durable. The Metal Prep solution also contains Zinc Phosphate, ZN3(PO4)2, (I really need to learn how to do subscripts and super scripts...) which reacts with "clean" iron to bond a light Zinc Phosphate coating on the steel.

ANYWAY......the surface is almost ready, and I'll hold off on the final cleaning of this one until the other unit is cleaned up, and then I'll hit them both with a ScotchBrite pad, clean them with the POR cleaner/degreaser, do the Metal Prep application, and then after they're dry, apply the first coat of POR.

These are the WMD's used in the process. The photo shows them in order, from most effective, to least. 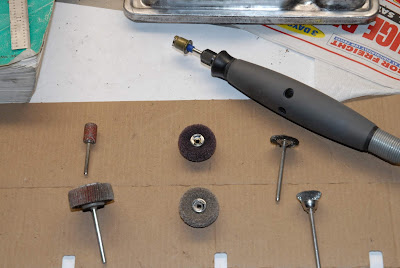 On the left, the 80 grit flap wheel and sanding drum were outrageously good at blowing off all the heavy rust, once I had wire brushed all the scale and loose stuff off.

In the center are little "buffs" of synthetic stuff like ScotchBrite. They're great for getting into tight areas, as when you bear down on them, they conform to the surface enough to get into crevices. They wear out pretty quickly, but they sure work great.

And in last place......we have the rotary wire brushes. They were kinda-sorta OK for getting most of the really heavy stuff (mostly scale) off, and getting dirt and discoloration off, but a hand held wire brush was faster.

I don't think it will take nearly as long to clean the other one, as I know how to do it effectively. I spent a couple of hours just experimenting, and trying different tools, before I learned what worked well.

If I had a bead blaster, these would be a 15 minute job, and have a much more uniform surface finish. Since it's getting painted, and will be inside another assembly, surface finish can take a back seat to rust removal/rust prevention.

I'll have to see if there are any "Maker" places out here that will rent time on things like bead blasters.
Posted by drjim at 9:48 PM