One of my favorite authors, and writer of the amazing work "The Right Stuff". The first work of his I read was "The Kandy-Kolored Tangerine-Flake Streamline Baby", which my sister bought for me when I was a Senior in high-school, and I found it fascinating, as I was just "getting into" cars at the time. And in College I read "The Electric Kool-Aid Acid Test" for one of my English courses.

He was quite a guy, and a terrific writer.

Here they are right after I finished the Harbor Fright workbench and got it in place. 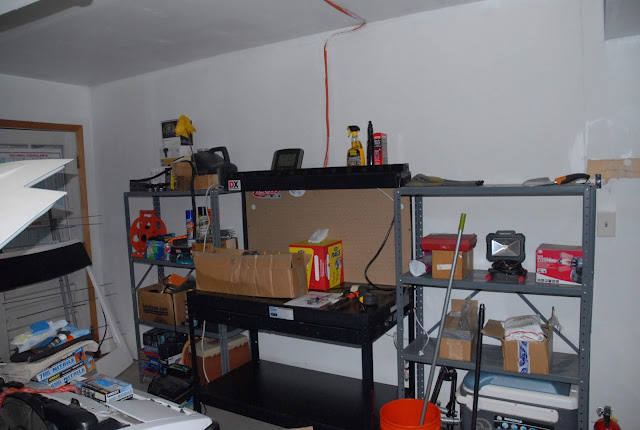 I got busy last night trying to square up and straighten out the right-hand steel shelving unit in the picture. The legs were two sections each, overlapped by one screw hole and bolted together. In the process of loosening things up, it got really flippy-floppy, so I took the 'top' section off, and then squared up the bottom half of the legs and two of the four shelves.

The fun began when I tried to get fully assembled, but with all the nuts and bolts loose, top section onto the bottom section. Every which way I tried, the thing would NOT go together in anything approaching a straight, 'square' configuration. I used a long tapered punch to ensure the holes were lined up before I tried to insert a bolt, but while I could get one hole to line up, the other was so far off that even driving the punch in with a soft hammer wouldn't line it up.

Realizing I had another shelf unit about 5 feet away, I scooted my little rolling stool over there and looked at it.

OOOPS!! Big error, Jim. The legs are meant to be butted together, and then bolted with a clip that this shelf unit didn't have. If you look carefully in the first picture at the shelving unit on the left, you can just barely make out the clip about half way up the left front leg, where the diagonal brace comes down.

And if you look at the out-of-focus rear leg towards the bottom in this picture, you can see how the assembler overlapped the legs and pounded in a bolt. The tilt of the leg is caused by it being forced into a position it doesn't want to be in. 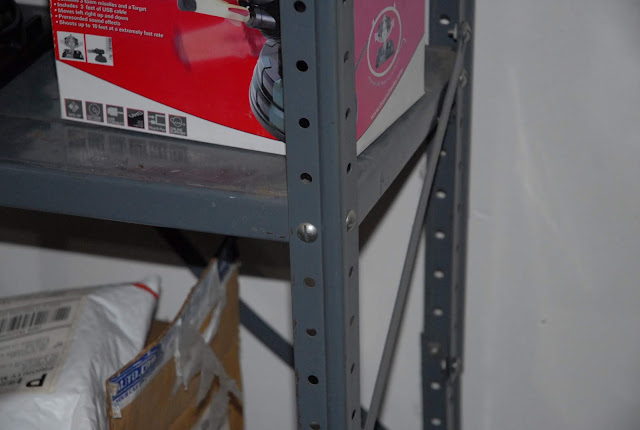 A trip to Home Depot was negative with regard to replacement hardware, so instead I came back with another HDX "cake rack" wire shelving unit. It looked so nice I went back today and bought another one for the other side of the workbench. 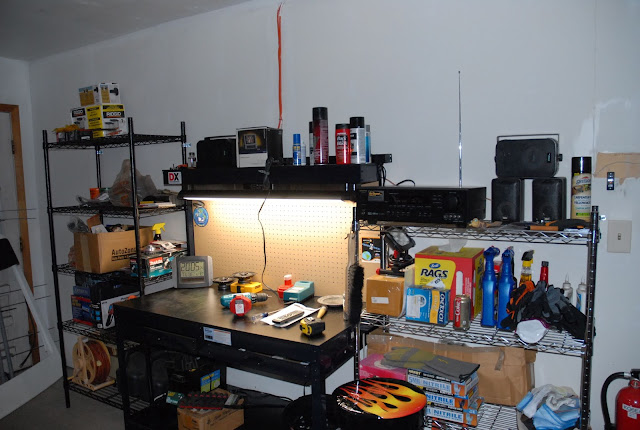 And we have tunes!! 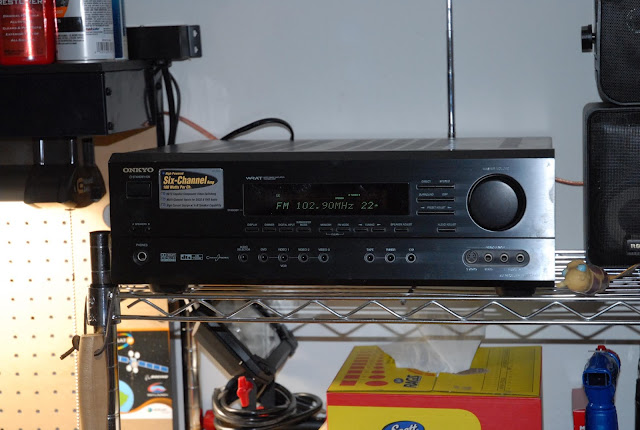 That's my very first, official, "Home Theater A/V Receiver" that I held on to for quite a few years. 100 Watts per channel @ .08% THD to the left, center, and right front speakers, and 100 Watts to the left, center, and right surround speakers. Add a subwoofer output, and it's a "6.1" channel receiver. Just feeding some Pyle mini bookshelf speakers for now. I've got some nice carpet-covered portable "P.A." speakers that will eventually be the front speakers, and the little Pyle units will get mounted to the walls about half-way towards the garage doors.

So I'm close to finalized on the garage configuration. Ihave a goodly amount of shelf space to support both my automotive and Electronics/Radio hobbies, and it's all neat, clean, and organized. 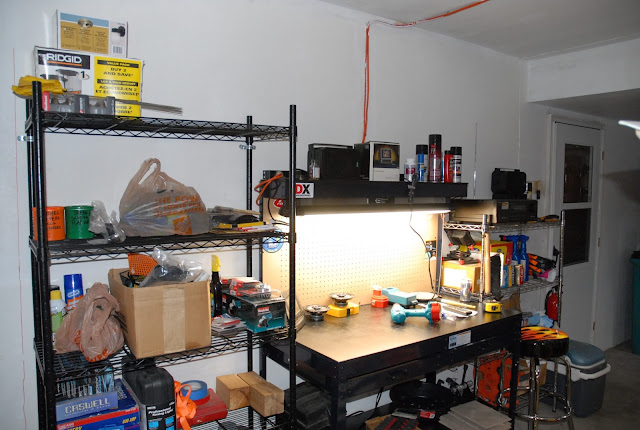 Even my wife is impressed. Next is to attack "her side" of the garage to get it organized enough to provide ready-access to her gardening tools, and hang the bigger things like the shovels, spades, and rakes up on the walls. I was able to build one good full-height 4-shelf unit, and one good half-height 3-shelf unit out of all the bits and pieces from the two full-height units. The full size shelf will go on "her side" of the garage to store her garden chemicals, potting soil, pots, and other stuff, and the half-size unit, along with another one that was here, are going to either our Handyman Guy or one of the relatives, first-come, first-served.

Oh, this is the "Bubba Job" that powers the garage door openers: 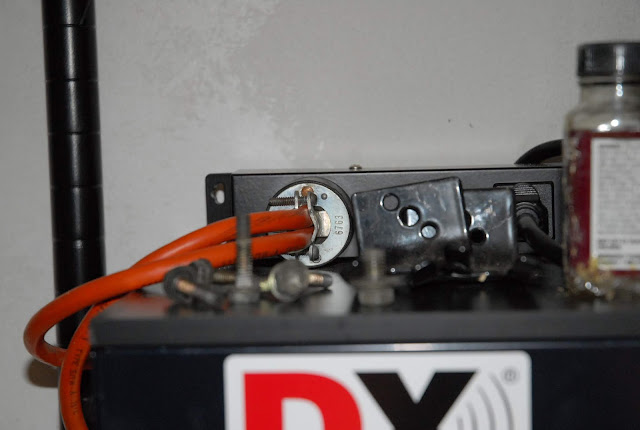 I'm going to run a single cord to a central point on the ceiling, and split it there to feed each door opener. And I'll use the right type of wire hangers to make it look nice and neat.

Doing all this work out in the garage, and making as many trips as I have to Home Depot, has given me ideas to build-out the electronics workbench down in The Dungeon, a.k.a., the basement. Rather than spend $1500~$2k getting a custom one built, I'm going to get some drawer units for end supports, and mount an 8' countertop to them. Gee...just like the Ikea stuff I had in Long Beach, and she made me throw away....

Probably do something similar for the radio desk/console, but that's still undecided.......
Posted by drjim at 9:51 PM