The Dark Side of the Garage

I pretty much finished cleaning up and organizing the far side of the garage, killing several birds with one shot. 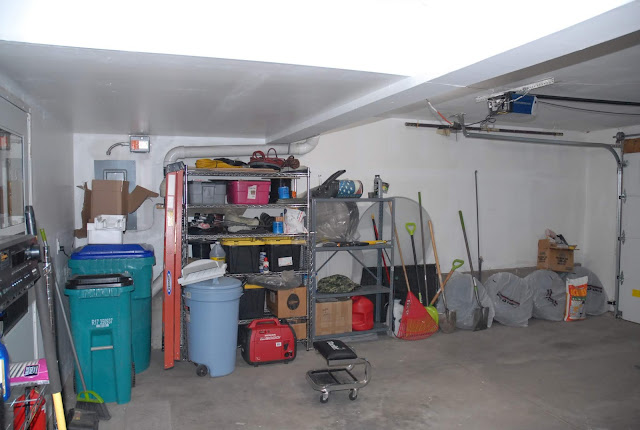 The Honda generator is out because.....Field Day! It had old gas in it, and the oil hadn't been changed in several years because I didn't use it. I'd still pull it over by hand every other month, but today was the first time it got any time on the meter in at least three years. I let it run in NON "Eco Mode", which is akin to running it at a fast idle. It responds much better to big load swings this way, as it doesn't have to accelerate very far to get up to full power. My Field Day load requirements are pretty minimal, so I always ran it in "Eco Mode", and I'd use about 1.5 tanks of gas from Friday morning until Sunday noon. It didn't run that whole time on that much fuel, but that's how much fuel I used at Field Day every year. ANYWAY....ran it out of fuel, changed the oil, put fresh gas in it, and she started right up on the second pull. I just loves me my little Honda generator!

So here's the rebuilt "1950's Era" steel shelf unit, all snugged down tight to the wire rack next to it. 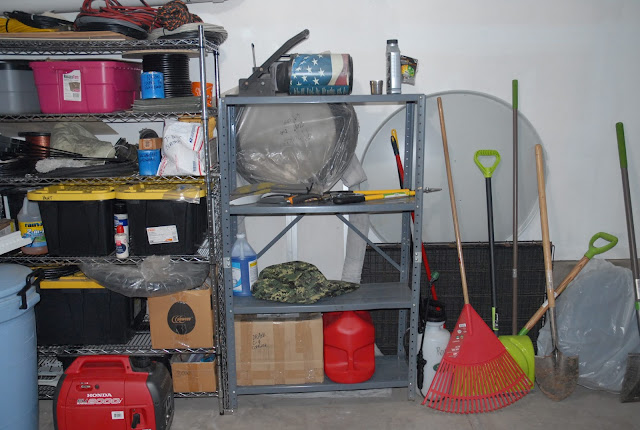 Came out nice and square after spending an hour replacing bent and tweaked parts with stuff from the 'donor unit', and screwing it all together tightly, correcting a few errors in the original assembly of it along the way.

I've had these two shelves 'left over' from when I built all the wire rack units over on my side of the place. One I left out deliberately, and one got left out accidentally. They're nice quality, and I just couldn't toss them, but seems like every way I tried to store them, they were in the way.

Hmmmm...maybe they just need to earn their keep. I stood them up, turned them sideways, and attached them to the wire rack on their side. This not only gets them out of the way, but they act like side walls on three levels of the rack. 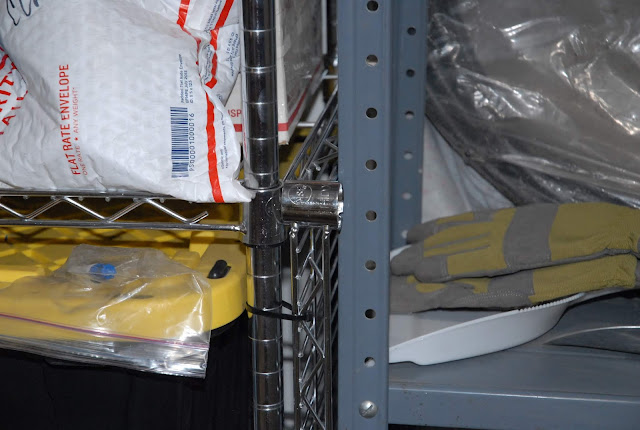 Yep, cable ties, three per side, holding them on. They're pretty much unstressed, and the breaking strength of six 1/4" cable ties is nothing to sneeze at, so I don't think they'll come clattering off to the floor.

My wife came out just as I was sweeping up the space, and stopped dead in her tracks. She looked at me and said "Is this what a real garage is supposed to look like?". My reply was something like "Yep, a real, functional, working garage looks a lot like this.".

I know she understands how much I was looking towards having a dedicated shop, and seeing what I've done here so far, she understands it's something I'm willing to work fairly hard at building, or at making what space I have as functional as possible. She was delighted she now has her "own" area of the garage, and she has plenty of shelf space to keep her tools organized.

I have to make a(nother) Home Depot trek tomorrow to get the hardware to hang the bigger tools, like the shovels, up on the wall. That'll open up some more foot space to ease access to the passenger side of her car, which was pretty good as it was. And I'm going to pick up another 48" LED fixture, and some electrical supplies to neatly wire them in.

GAD....I'll be happy when this workspace is "finished". Then I can get back to working on the car, and get started on building up a bench/work surface on the "Maintenance & Repair" side of the Radio Room.