Which stands for....nothing. It's the "Idle Channel" sound of radioteletype meaning there's no traffic being sent.

And that's what I've been doing the last several days....sitting here "idling", and taking care of my wife who tweaked her back somehow while dogsitting at The Kid's Place, a.k.a The Country House up in Bellvue.

Now this is a BIG freakin' house, almost 3600 sqft including the basement, and it's spread out over four levels. It's an open floor plan downstairs, and sound echoes around in here like crazy. So, how do we keep in touch here? Simple, with RADIO! The other day when I was on a(nother) Home Depot run, I found these little Cobra "MicroTalk" GMRS/FRS radios on sale for $30. 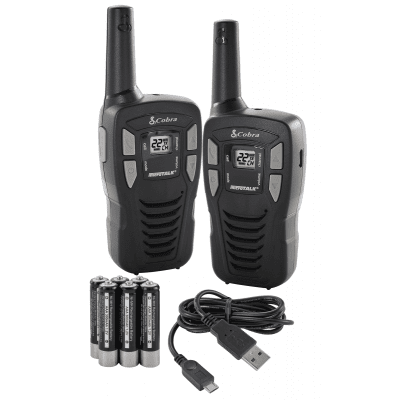 GMRS stands for General Mobile Radio Service, and requires a license. FRS is the Family Radio Service, and is license free, like a UHF version of CB, but with FM used instead of AM or SSB, resulting in much clearer communications.

Ironically, the original Citizen's Radio Service (ALL FCC licensed radio bands are considered "Services") was in the UHF band.

So why on Heaven's Earth did I buy two more hand-held radios when I have four of them, and my wife has two of her own? Convenience, Benjamin, convenience.

With these little guys you just pick up the radio and talk. When you're done, you put the radio down. Using our Amateur Radio Service radios would entail using our callsigns, following the regulations, and finding a clear simplex frequency. That's a bit of overkill for "Honey, bring me some more Ovaltine" comms.

Both cars, which were in the driveway yesterday, got through the hail without any damage that I could find today. They're both plastered with the leaves that got blasted off the trees and blown around, but no hail dents. The backyard is a mess, with lots of leaves and branches from the neighbor's cottonwood tree, but no damage. And while the 33' vertical antenna was whipping back and forth about 45*, it, too, got through unscathed.