GROAN.....Well, Field Day is over for another year, and as far as we know, this was the first time the Iowa has ever been on-the-air for Field Day.

Friday was "Set Up Day", and was sunny, hot, and very humid. After 15~20 minutes of working outside we were soaked, and needed to find some shade and have a cold drink.

My buddy Doug came over about 1100, and we loaded the tower and 2 Meter Yagi in the back of his pick-up, and then loaded the two tubs containing most of the gear, and a large soft bag with the rest, in my Jeep.

Camera and laptops went in the front with me, and then my son came by and loaded up the table and chairs and cooler in his Xterra.

SO, off to the ship!

We were able to park close to the front brow, which helped a bit, and we lugged all the gear up the ramp, and one ladder, to the O1 level, portside, just aft of Turret #2, on "The Admiral's Veranda". The starboard side of the ship has the hatch to the Captain's In-Port cabin in this location. 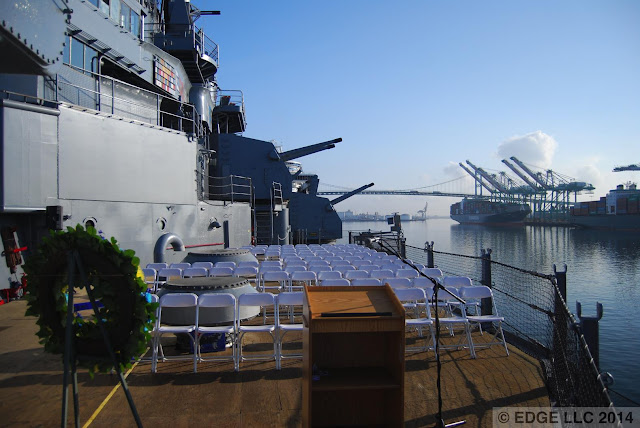 This area is typically used for special events, like the Turret #2 memorial shown above, and is off the tour route, although the tour route runs forward and aft of it, so we had plenty of foot traffic going past wondering what we were doing. Once in a while someboy would stop and say "Oh, that's right, it's Field Day weekend", and we stop work and talk to them.


We got the antenna assembled and stood it up, aligning the base to True North. Two years ago when we set up for JOTA I tried using my compass for this, and found out there's just a bit too much steel in the area for my little compass to work properly! Turns out the Main Channel in the harbor runs due North/South, so I just got the base of the tower as parallel to the channel as I could. 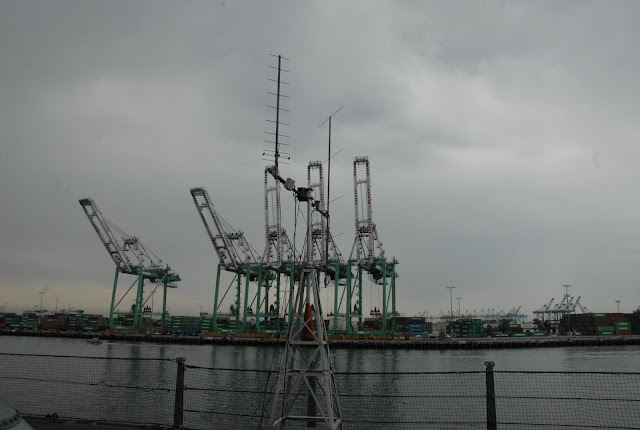 That was about it for Friday. After lugging all the gear up and putting it together (it takes me about two hours to assemble and align everything) we were soaked, thirsty, hungry, and tired, so we headed home.


I got there about 0830 Saturday morning, and set up the table, and snaked the cables over to the gear: 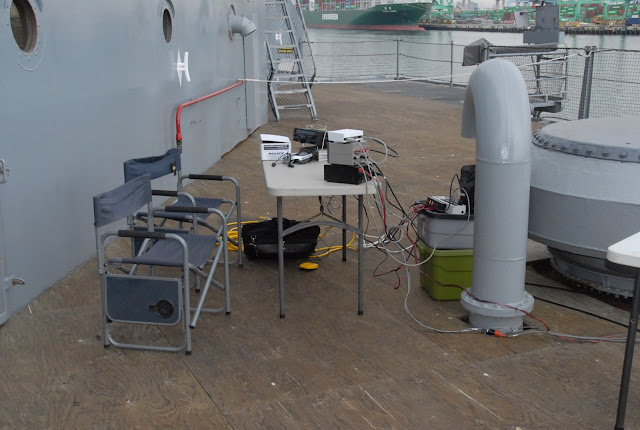 The Security guys went in the Captain's cabin for us, opened a port hole, and ran our extension cord through it so we'd have power, and I ran some calibration tests with antenna controller to make sure everything was working: 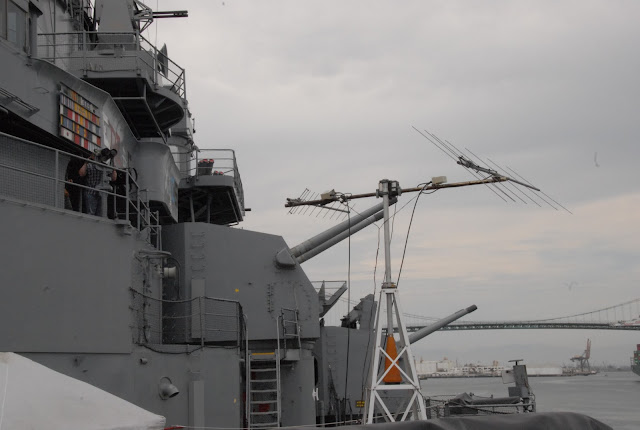 By this time (1100 Local, 1800 UTC) Field Day had started, but since there wasn't going to be a satellite pass for an hour or so, I went down to the Comm Center to see how things were going.

Here's my buddy Doug explaining the logging procedure for the 'phone station to one of our BIARA member who came down to operate: 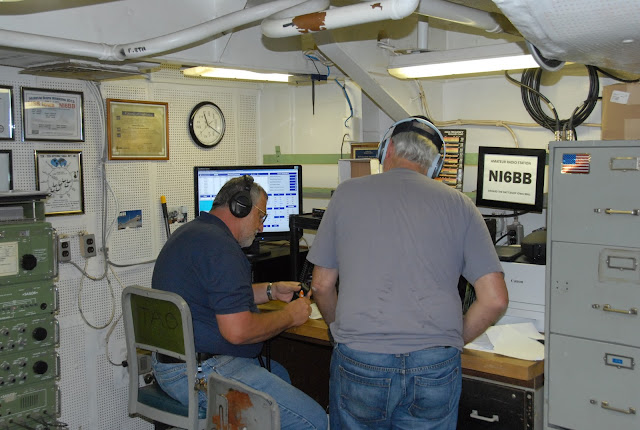 And Tom and "Doug the Younger" getting in to the swing of things at the CW station: 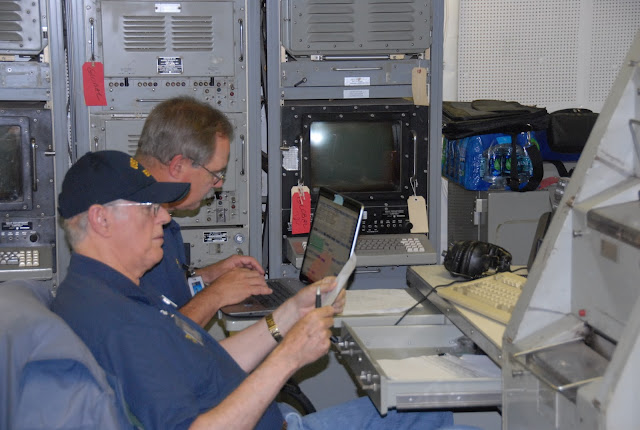 Things seemed great in the Comm Center so my son and I went back up to the Satellite Station, where it had started to sprinkle, sending us into panic mode: 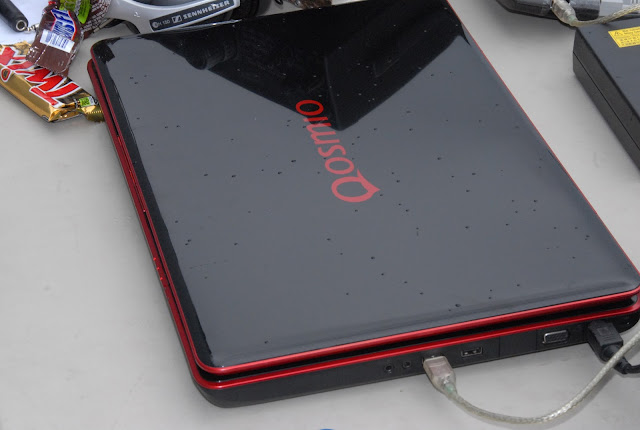 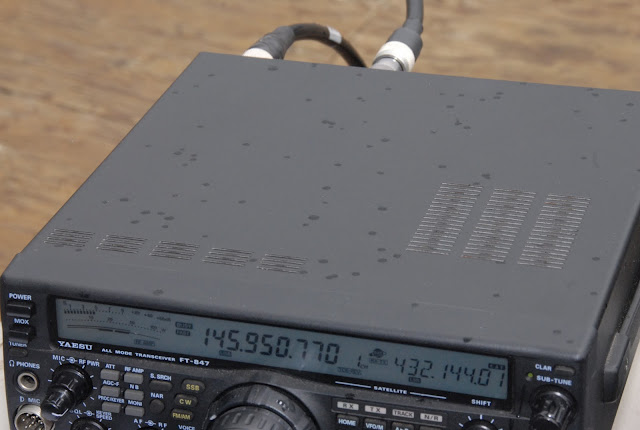 We scrambled around to get a tarp (Thanks, OPS Guys!) and a pop-up cover (Thanks, Sue!), and by the time we marginally "weatherproofed", we'd missed the pass of AO-73. 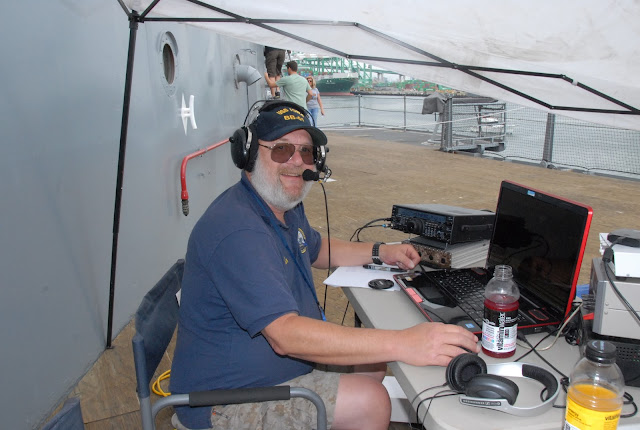 We made some passes, found some problems I'll describe later, enjoyed the cool, cloudy (but damp!) weather, and shut everything down so we could exit the ship about 2045.

Grabbed a burger on the way home, and hit the rack.

Got back on the Ship about 0845 Sunday morning. It was going to be another hot, muggy day.


Meanwhile, back in the Comm Center on Sunday morning, the CW guys are going great guns: 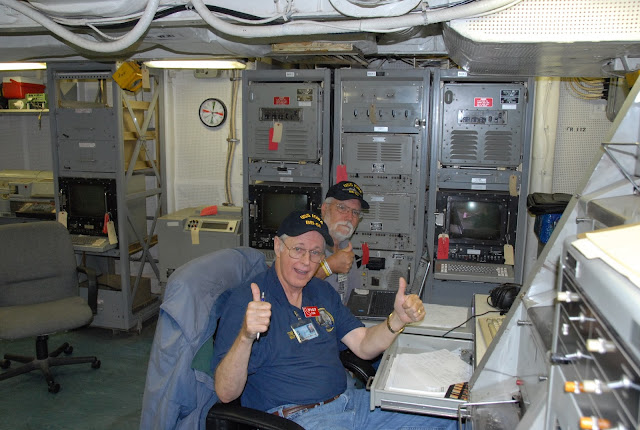 And "Doug the Younger" and his son have taken over for "Doug the Elder" who's out attending to some ship interface business: 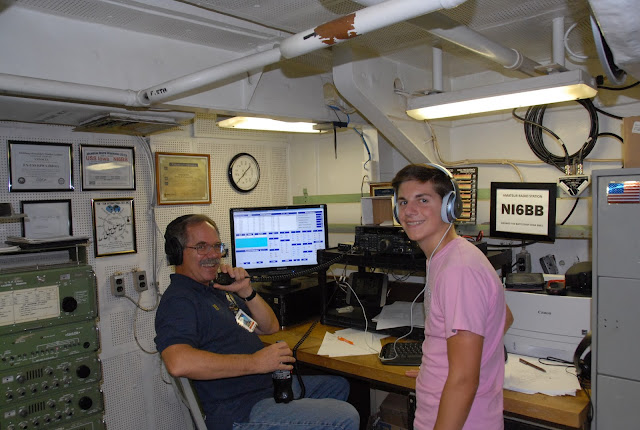 One of the "nice" things about operating the satellite station is that you have gaps between the satellites going over where you can talk to the public as they wander past, so we set up a second table with a bunch of hand outs provided by the ARRL: 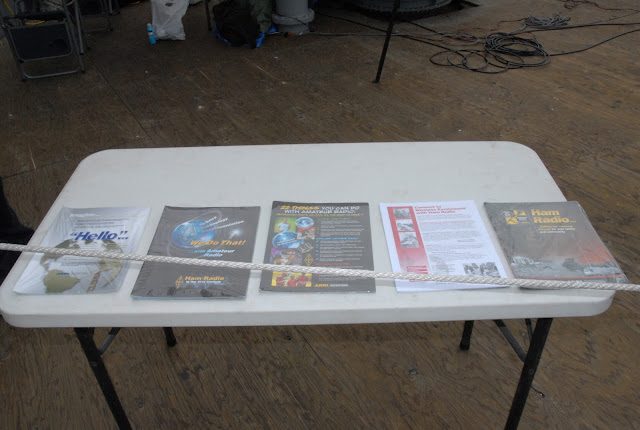 One of the "bad" things about operating the satellite station is that you don't have a lot of time to correct equipment problems you discover when a satellite is going over. We made ZERO contacts on AO-7 this year due to there being a problem with the "Doppler.sqf" file that SatPC32 (my tracking and control program) uses to make the Doppler correction and tune the transmitter and receiver to the correct frequencies.

Normally, when a satellite comes up over the horizon, SatPC32 will move the antennas to the correct heading, and tune the radio to the middle of the transponder passband. On the FO-29 satellite this works perfectly. The satellite comes up, I tune to an open frequency in the upper half of the band (the lower half is reserved for CW), transmit my callsign, hear my own voice coming back from the satellite with a slight delay, and proceed to make contacts. 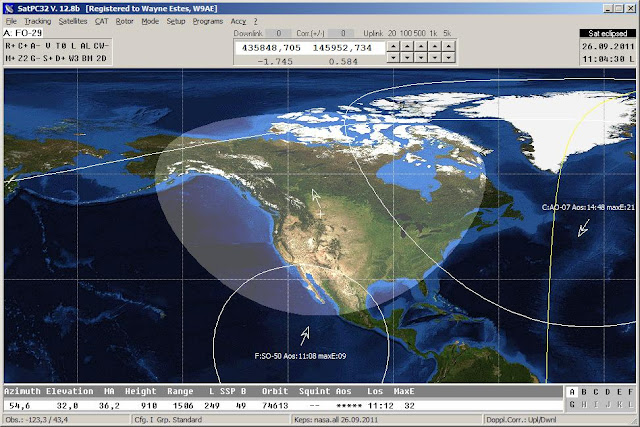 With AO-7 though, I've had to manually change the transmit frequency until I hear myself on the downlink. I never bothered to make a note of which way I had to tune (D'OH!), or if it was a consistent error (Double D'OH!) until this year, as I didn't know what was causing the offset.

This year, since the satellite was pretty weak, I spent some time experimenting, and found the problem due to some modifications I had to make last week to add a new satellite.

In manually adding the information for AO-73, I realized that the "Doppler.sqf" file is where the "base" frequencies are stored that the program applies the Doppler correction to, and then sends the commands to the radio to tune to the correct frequencies.

Somehow, the base frequency entries in the "Doppler.sqf" file for the AO-7 transponder were wrong. They were wrong by exactly 4kHz, and low in frequency, matching the numbers I wrote down as I experimented with radio.

BY the time I edited the file, which requires you to close the program and restart it, AO-7 had gone below the horizon on it's last pass I would be able to use for Field Day this year. I'll set the station up here at home and use it on a regular basis once I get a longer mast to get the antennas above the roof.

The other "problem" we had this year was due to the location on the ship we were directed to use. We only had a clear view of the sky on one side of the ship, which resulted in losing satellites once they dropped below a certain elevation to the West of us.

I was going along great on FO-29, and all of a sudden the receiver got very quiet, with not only all the active signals disappearing, but also transponder noise floor dropping to zero.

I stuck my head out of the pop-up, and found a situation almost identical to this: 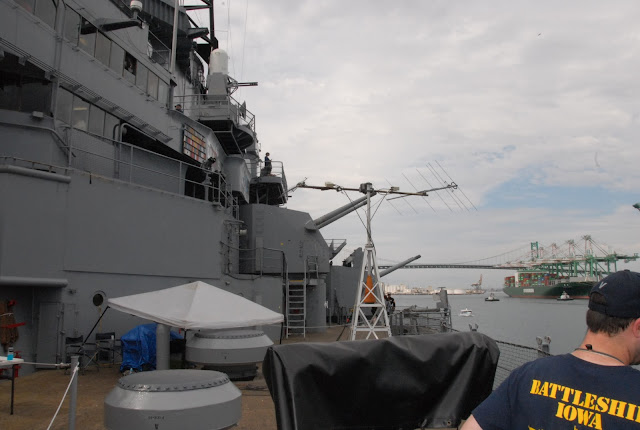 It's just a bit hard to hear anything through all that steel! That's my son to the right in the photo.

When we set up for the BSA JOTA event, we were on the portside fantail, and had a pretty clear view of the sky. Since there was a major private event back there Saturday night, the area was closed off. The other area we  had requested was forward, beyond the area where our visitors are usually allowed, but that area was in use Friday night, so we couldn't set up there Friday afternoon.

There were only two usable passes of one satellite, AO-73, Sunday morning, one about 5* above the horizon, and the other that started about 8 minutes before the end of Field Day.

I decided it wasn't worth the effort, as we'd proven on Saturday the 5* passes in that direction were not feasible due to all the cranes and stacked containers on the other side of the channel, and since I'd missed the only other pass of AO-73 on Saturday due to having some high-level visitors, and I'd had trouble using AO-73 the previous week at home, I started an early tear down of the station, and helped the guys in the Comm Center by logging for them.

Sunday was also another hot, sunny, muggy day, so I took my time and didn't rush things.

So, the final tally for the Satellite Station was 12 contacts on FO-29, one on the SO-50 FM satellite, and two terrestrial 2 Meter contacts, one in South Orange County, and one in San Diego County in the Twentynine Palms area.

The 'phone guys did almost 600 contacts, and the CW guys did almost 300. I haven't finished merging the logs and adding up the bonus points yet, so I'm not sure how we did in comparison to the other entries in the 2D class.

I won't be running satellites aboard next year as we decided the cost/effort/benefit ratio just doesn't wash. I typically would go back to the Field Day site at 0430 on Sunday to get ready for the 0500~0730 satellite passes, and always doubled my score from the previous day, but we couldn't get back on the ship until 0800 Sunday morning. Plus, I had the "sky blockage" issue this year, so for 2016 I'll, run the 6 Meter/VHF/UHF station from the same location using some stacked omnidirectional antennas mounted at the rail, and possibly some amplifiers to make myself heard.


So, a big thanks to to the Security and Operations people on the Iowa who helped us make this happen, and guided us in learning the ropes to running a "mini event" like this.

Update On The Pioneer SX-780 and Speakers

Sooooo....I dragged the two speakers I made some time ago out of the basement, and set them up with the SX-780. When I used these speakers ...