WELL.....I "pulled the trigger" and bought an AR type rifle.

Specifically, I bought an S&W M&P15T. 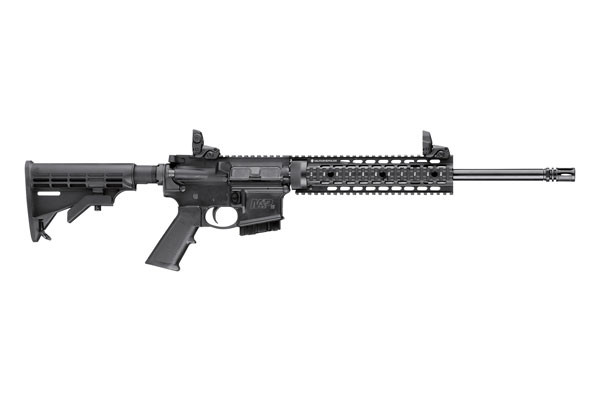 This is very similar to my setpson's rifle that I shot a lot last July in Colorado, but has the (STOOOPID!) Kaliforniastan "Bullet Button" instead of a standard magazine release, a slightly heavier barrel, and some Picatinny rails with "flip up" iron sights in place of the forgrip.

Both my wife (who's pretty recoil-adverse) and myslef really enjoyed shooting her son's M&P15 while we were there. She was surprised how little recoil there was, and I was surprised how fast I could acquire, and hit, targets using the red dot sight on it.

I was ringing the steel no problem at 200 yards, which absolutely floored me.

This one comes with 3 snap-on handguards to use on the 90*, 180* and 270* positions so you won't chew your hands up on the rail in case you don't have any TactiCool stuff mounted on them.

I might put a weapon light on it, and will definitely get a Red Dot for it.

It comes with ONE 10-round magazine, and before I take the rifle class I signed up for, I'd like to get several more.

SO......being a complete "AR Rookie", what do you guys recommend? I've read that Magpul makes good magazines, and the guy at the gun shop said C Products also makes good ones, and to stay away from ThermoMold.
Posted by drjim at 7:47 PM