Why Do My Projects Always Expand?

Whoo boy....I'll bet all of my friends out here know what I'm talking about!

About 8 months ago my radio club had a members-only auction to get rid of equipment we no longer use in the club station. I came home with an ICom R-71A shortwave receiver, and a Yaesu FT-726 VHF/UHF multimode transceiver.

The ICom works OK, so it went on the shelf, but the reason I got the Yaesu for $25 is that it allegedly had a problem with the UHF module, it's not suited very well for repeater (FM) use because it doesn't have a CTCSS "Tone Board", it has no "Comm Port" on it so you can't run it with a PC and it wasn't usable for satellite use, as it lacked the satellite module. 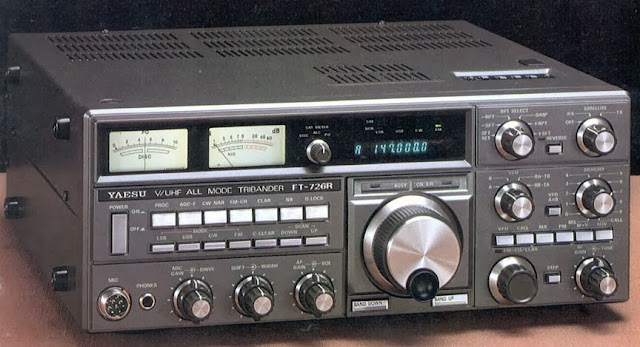 I got it home, and it sat for awhile whilst I went through my "Medical Adventures". I finally started working on it a month or so ago.

I pulled the covers and knobs off to scrub them, and lo and behold, what's this?

It has the satellite module installed!

Some basic testing shows that it puts out 10 Watts on both bands, and the satellite unit works as per the manual, BUT, it's 8 kHz off in frequency on transmit on both bands.

What makes this radio unique, along with it's newer big brother the FT-736, is that the radio itself, without any of the modules, is a "10 MHz, I.F.", and the individual modules act as "transverters" to upconvert the 10 MHz to whatever, and then downconvert the whatever back to 10MHz.

So, since the frequency is off the same amount on two different bands, it points to a problem in the basic radio chassis, exclusive of the band modules.

ANYWAY.....I figured I should do a full alignment on it to ensure it works properly before I sell it, and that's when the fun started......

I got started doing the alignment, and then got to the step where I needed my RF Probe. Hmmm...where'd I put it? Can't find it, order a new one. While waiting for the new one to arrive, I use my frequency counter and DMM to adjust the things that I can, which goes fine.

New RF probe arrives, and I finish up the initial alignment steps. The SSB and CW portions of the basic radio are now operating per spec. Time to do the FM section....UH-OH....I need a Deviation Meter to adjust the FM deviation. Huh...never have owned one of those. Probably time to buy one, as I'm sure I'll need it after I retire and really start doing radio stuff! 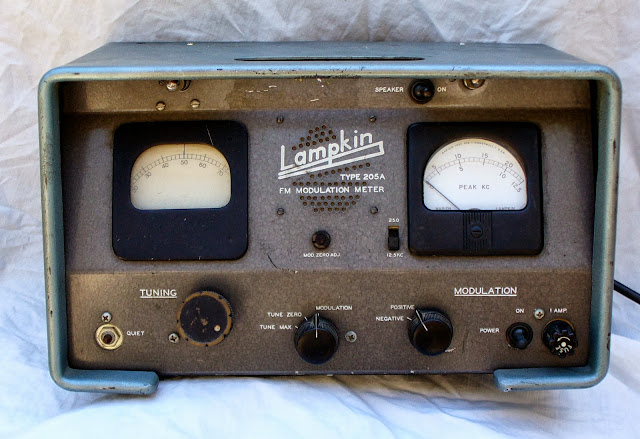 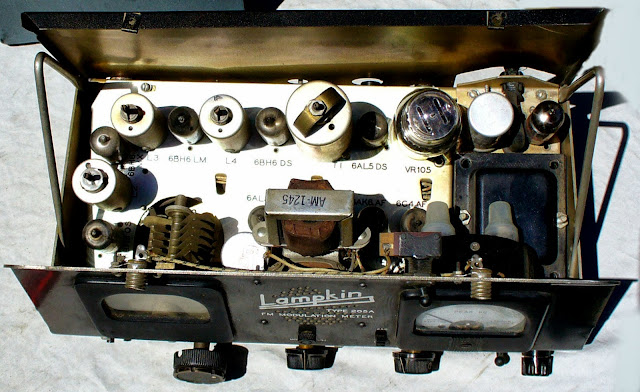 It arrives in great shape for being as old as I am, and works *perfectly*. Super...time to set the FM deviation!

Uh-oh.....I need a calibrated source of 300Hz and 2800Hz. I have a two-tone generator for aligning HF SSB radios, but it operates at two different, fixed frequencies, and my service manual is very specific on why you must use 300 and 2800Hz.

Hmm....well, I have that ancient HP signal generator I'm slowly rebuilding as a memorial to my friend, but I'm waiting on some esoteric parts for it. I also have a newer HP solid-state signal generator, BUT that dirty old thing was the piece of equipment I was working on the night before I got the MRSA infection in my finger. Think before I handle that one again I'll put some gloves on, and scrub it down with bleach, and then hydrogen peroxide!

Off to eBay again, where I score a MINT Heathkit IG-18 audio generator for $70, FREE shipping!

While waiting for the generator to get here I start searching for a manual for it. Since my Google-Fu is strong, I find that with a few simple modifications, you decrease the Total Harmonic Distortion by a factor of TEN or more, and also make the frequency accuracy better by the same amount!

Wow....! These things are already pretty good, and for about $30 in parts I can make them an ORDER OF MAGNITUDE better?!?

The generator gets here on time, and all the parts I either have, or picked up on the way home from work on Friday. I take the covers and knobs off the generator (why do I feel Deja Vu coming on?), scrub them and dry them, and start testing the generator to make sure it works before I modify it.

Note to others:  ALWAYS test the equipment before you modify it to make sure it works, or you can wind up chasing you tail thinking you screwed up the mods!

The generator tests out fine after I clean the switches and controls with some DeoxIT (amazing stuff!) to clear up some erratic operation.

My six-month old LED magnifying lamp goes casters up with a bang and cloud of smoke. I really liked this thing as the color temp of the LED's made it really nice to work with, the big 5" 3-diopter GLASS lens was clear with no distortion, it was light weight and easy to move around on the extension arm, and it didn't throw off enough heat to warm the shack in the winter time. 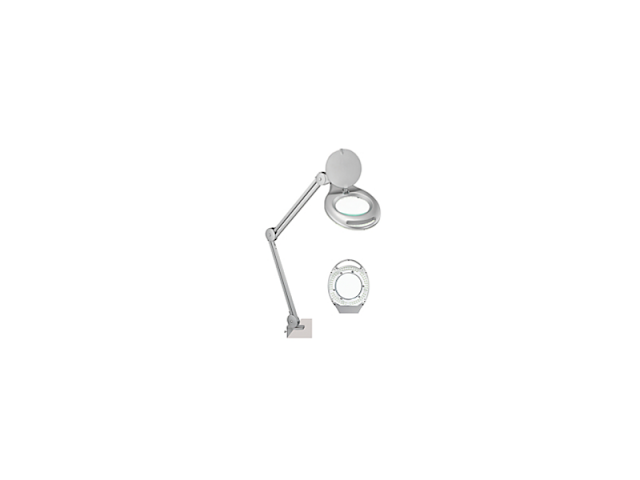 And I'm getting old enough to really need a nice illuminated magnifying lamp for close-in work.

Oh, well......hop in the car and drive to the closest office supply store, which happens to be an Office Max that I go to regularly. I shop what they have, and pick one with a circular fluorescent tube in it, mostly because the only LED lamps they have are either too small, or have crummy PLASTIC "lenses" in them for "magnifying" what your working on.

It's not as bright as the LED lamp, and even though it shouts that it's "FULL SPECTRUM!!" on the box, I still prefer the color temp of the LED light. I took the cover off the LED light, and sure enough, the 59-cent switching "power supply" they used has vaporized. I'm going to count the number of LED's in it, see how they're connected, and come up with some kind of external supply to run it with, I like it that much.

Get home, unpack the new lamp, set it up, and start using it to inspect the soldering job on the generator. It is, after all, a HeathKIT, and some builders were less competent than others.

Touch up about 1/3 of the solder connections, set my Tektronix 2465B on the bench for the first time (don't worry, it works fine!) so I can adjust the generator, and HEY....it's 11 PM already?

So, here I sit waiting for the soldering iron to warm up, small pile of parts at the ready, fingers crossed, and wood knocked, and hopefully I can have the generator modified and operating tonight.
Posted by drjim at 3:44 PM