Is the distortion lower than before? Does it better the Heathkit specs?

I don't know because I don't have a Distortion Analyzer of THD Meter, but it adjusted "per the instructions" and appears to work fine. 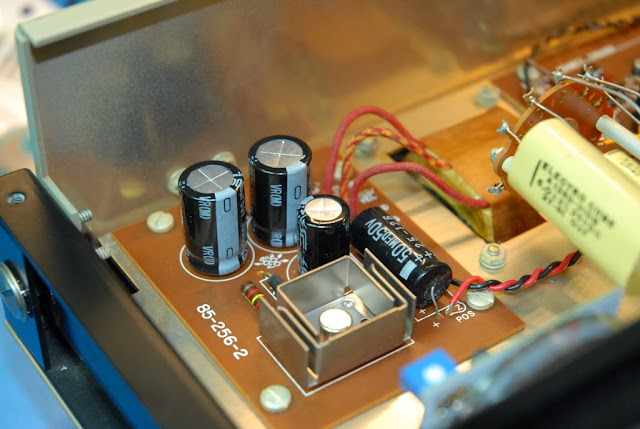 And the capacitors I replaced on the Wave Generator board: 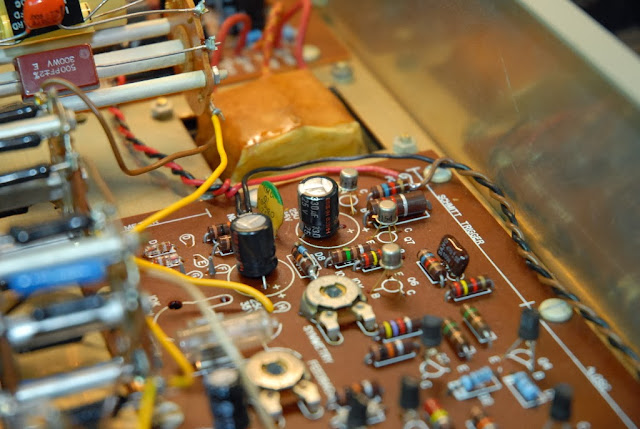 And the Meter Buffer circuit board mounted to the meter studs: 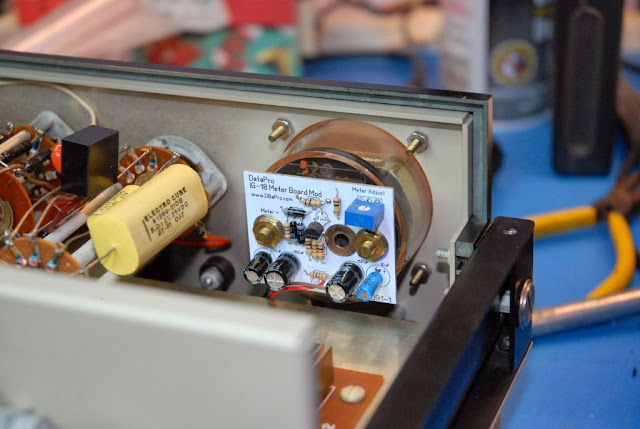 One other thing I did was to replace the neon lamp "Power On" indicator with an LED. Neon lamps can oscillate and generate wideband noise under certain conditions, so out it went.

I used the existing wiring which I rerouted a bit, and the existing terminal strip. The strip had a 2700 Ohm, 1/2 Watt resistor mounted to it, which I replaced with 4 8200 Ohm 1/2 Watt resistors in parallel. I needed this value to drop the +40 VDC power supply voltage to a lower value for the LED, which should have 1.5 Volts across it, and draw 20mA, according to the specs for the LED I'm using. This would have required a 1 watt resistor as I'm dropping quite a bit of voltage, and I didn't have any 1 Watt resistors in the value I needed. So, parallel 4 half-Watt ones, and you get TWO Watts, which gives me some headroom on the power dissipation.

I wasn't about to add a regulator to power a single LED, so I'll just accept the "wasted" power in the resistors. 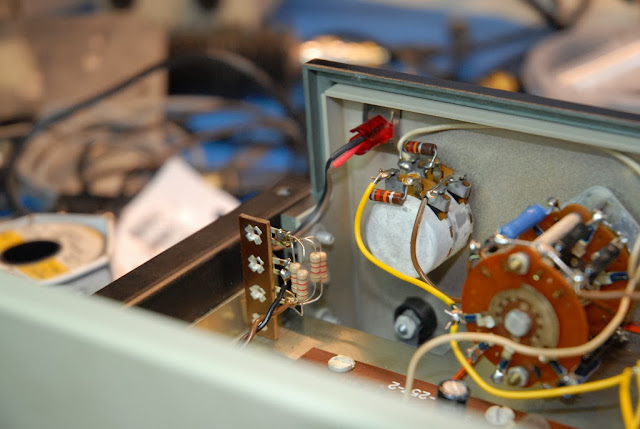 Unfortunately I'm going to have to put the FT-726 radio alignment on the back burner for a week or so (again! Will I ever finish this thing?), as I have an Elecraft KAT100 Automatic Antenna Tuner kit arriving tomorrow.

I'll be operating NI6BB on the Iowa for the BSA JOTA event in late October, and the member who normally supplies the radio and tuner we use will not be available, so I'll take my Elecraft K2/100 down to the Iowa to use. This radio is my portable/emergency HF radio, and since I normally use it with my Buddipole and manually adjust the antenna using an antenna analyzer, I didn't really need a separate tuner.

The "Discage" antenna we primarily use on the Iowa is broadband, BUT it doesn't have a "1:1 VSWR" in the Amateur Radio bands (it's more like 3:1) resulting in most radios cutting back their power output. The tuner (really an impedance matching device) will allow the radio to operate into a 50 Ohm load, and deliver full power without subjecting it to the voltage stress a high VSWR would cause.

And I'd like to get the tuner kit built at a leisurely pace, rather than spending several nights burning the midnight oil, getting overly tired and making mistakes, and test it before I need it.

Hope y'all had a good weekend!
Posted by drjim at 8:31 PM