Had a really fast-moving front go through shortly after 0900, and it brought about 30 minutes of the "little snowballs", which I'm sure there's a meteorological term for.

Look at the timeline of the graphs, and you can see the humidity spike, the temperature drop, and the wind shift from SW to NW. The little step up in the barometer is the front coming through.

Almost all the snow we got earlier this week has gone, and it was very windy. My winds speeds don't record as high as officially reported because of where and how high my anemometer is mounted. It's in the clearest spot I could use, but it's not 10 Meters high, and is shielded by the trees and houses here. As a result, my "Gust Speeds" are closer to the NWS sustained speeds, and the gusts here would most likely be 40~50% higher than indicated. So, we had gusts of up to 60 MPH or so. It was howling pretty good last night! And the new double gate came through unscathed, although it did pop open. I didn't have a lock or anything through the holes in the hasps, and from the battering it got, the hasps turned, and the gate opened. BUT....the Big Wheels out handyman put on the front kept it from rolling all the way open and beating itself itself to death like the original one did. I closed it, and put a 3/8" x 2" bolt through the hasps, and using two nuts to keep them from loosening. Should be good for the rest of the year, I hope.

And our old friend 63-9792 from Offut swing by for about 6 hours. Didn't screenshot the flight track, but this is what she looks like all cleaned up. Hard to believe the airframe was built in 1963! Wonder how may times she's been rebuilt/reengined? 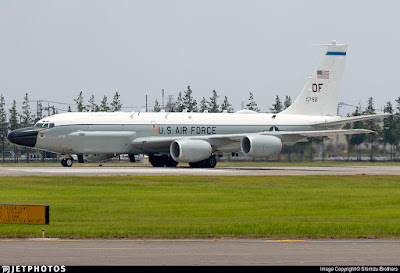 They also made several touch-and-goes on their return to Offut, so most likely another training flight.

Hope y'all have a safe and Blessed Sunday!